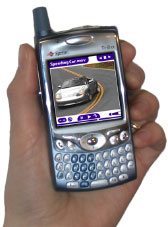 Palm, Inc. has announced that the Microsoft Service Feature Pack (MSFP) client for its Treo 700w smartphone will be available later this month.

With MSFP, businesses will be able to deliver ‘push’ email to their employees using Treo 700w smartphones wirelessly connected to their Exchange 2003 servers without the need for third-party software, hardware, or service fees.

Up till now, Treo users have had to rely on Traditional email – which is more of a ‘Pull’ email, as opposed to the ‘Blackberry’ kind of ‘Push’ email that automatically sends the email to your handheld.

In addition to the MSFP’s push email functions, this software update will also allow the Treo 700w to wirelessly synchronize calendar items, contacts and tasks with Microsoft Exchange. Also, it will enable over-the-air lookup of a company’s Exchange Global Address List (GAL), and security features for IT administrators, such as over-the-air device password policy enforcement and remote wipe of the device in case it is lost or stolen.

The new ‘Push’ email feature will require that a software update be installed on both the Treo and the Exchange Server.

Palm did not name a specific date when these software updates will be released, aside from saying it will be later this month.

The company also said that, going forward, the software will be pre-installed on Treo 700ws, as well as future Treo models based on Windows Mobile.

As soon as we get this update, we will let our users know how it works.