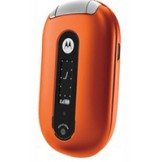 When thinking of Motorola’s PEBL, the immortal words of the anonymous comic come to mind…

Such describes exactly how this reviewer feels about the Motorola PEBL This is my first of possibly many reviews for GadgetNutz.com, so I thought it appropriate to let you know a little about myself for perspective. I am a gadget nut. I love new toys, and over the past few years, I’ve had everything from a Treo 650, to my last phone, a Nokia 6610.

Deceptively small, weighing in at 3.4′ by 1.9′ by 0.8 inches and weighing only 3.8 ounces, I initially discounted the PEBL because I have very large hands. I simply couldn’t imagine how a big brute like myself could possibly handle something so small without breaking it.

Once opened however, you quickly realize that the PEBL is, in fact, larger in feel than most candy-bar style telephones. On the inside, you’re treated to a smooth, mirror black finish which adorns the keypad and relatively large screen surfaces.

At first glance, it’s a total fashion statement, but somehow between the telephone’s unique, smooth outer shell and the finish on the keypad, it really sets this phone apart.

The keypad itself is a miracle of modern technology and one would begin to wonder how Motorola managed get everything in such a small area while still making it feel open and uncrowded. The keys themselves aren’t really ‘keys’ in the traditional sense. If you’ve ever used Motorola’s RAZR phone, you know what I mean, but the entire surface of the keypad feels integrated, as though it was laser-carved from a single piece of metal. Even as a big man, I have no problems navigating or punching in digits..

Unlike some competitors, I believe Motorola took a step back here and re-examined it’s core competencies. That is, to put out a great phone first and add all the other stuff later. My experience with the Treo 650 taught me the invaluable lesson that it’s better to be a phone first and PDA second.

As a disclaimer, I’ve only had this phone for about 5 days, so I’m still putting it through it’s paces. All the bells and whistles are still as yet a mystery to me, but here’s what I do know. The call quality, both hearing and spoken are phenomenal. On the last two cellphones I’ve tried (the aforementioned Treo 650 and Nokia 6610) I had to strain to hear people, or position the phone at a strange angle away from my head just to get through a conversation. So far, I am most pleased with the actual phone bits, which is my most important criteria.

The cute and useable…

Sure, it’s a got a camera. It’s not a mutli-megapixel camera, but at 640 x 480, it does exactly what I want, which is to allow me to torture my cats taking photos (they hate my Nikon D50 because of the ‘pre-flash’ autofocus)… It also functions as a video recorder, and an MP3 player… One smiggling little drawback is that the PEBL comes with only 4 megabytes of usable memory. There isn’t any memory slot available either, which might allow one to insert little memory sticks full of MP3’s, or to transfer pictures, video, and ringtones back and forth. At 4 megabytes, you might be able to fit two songs on it. You might also be able to record that precious moment of baby’s first steps, but the idea of taking it and getting the concert of your favorite band is pretty much a no go.

One of my new favorite features, and one I haven’t enjoyed until now, is the bluetooth capability, which really makes it easy to make a call via without having to take your eyes off the road. I’ve paired it with my Motorola HS850 bluetooth headset and people I’ve chatted with report that they can hear me without any problems. On the right side of the phone is a quick-key for voice commands. Pressing it brings up a menu which briefly announces that it’s made by ‘2005 VoiceSignal’ at the bottom, at which point you can simply say ‘Name Dial’, ‘Digit dial’, or about 8 other commands to include turning on the camera… Apparently my southern drawl however poses a problem for the voice dialing software, or maybe I just have to shout louder ‘Name Dial’ six or seven times before it gets the hint. I don’t fault the headset, or the phone for that as it’s a matter of me getting accustomed to it, but it would be nicer if I could just say ‘Dial Bobby’ rather than the following dialog;

(I bolded the text above, because it’s usually what I’m shouting into the headset in the middle of Walmart while shopping)

Connecting it to the computer is also unique, as the only connection on it’s ‘Star Trek torpedo tube’ shaped body is by way of a USB connection. Even the charger for it connects via the same USB port. Mysteriously however, you cannot charge it by simply plugging it in via USB port on the back of the computer. I picked up a copy of the Motorola tools v4.0 CD and a USB cable, and it works as designed, but it would have been really, really nice if I could have simply charged my phone anywhere there’s a USB-capable computer with simply a retractable USB cable…

In any event, that pretty much sums up what I’ve found out in my first week with the Motorola PEBL (Orange).
My bottom line is as follows;

I think Motorola took one step back, and two giant steps forward with the PEBL. It’s a great design and from what I can tell, it’s marketed towards the young, urban professional, both male and female, who want a great cellphone, and want to look great having it. Unlike the Motorola RAZR which appeals to more the ‘Matrix’ and ‘skateboarding’ crowds, this phone has a grown-up, sturdy feel to it, which really belies it’s small size. The telephone quality is fantastic, and I had it four days (full of talking, tinkering, and testing) before I needed to plug it up to recharge it.

It comes in five colors to include Black, blue, orange, red, and the ubiquitous pink. I bought orange, because as anyone who knows me can tell you, I’d NEVER find a black phone covered up in all the junk on my desk. It also just happened to match the shirt I was wearing at the time.

If you want a multi-megapixel camera, to schedule your entire life, to play 5000 of your favorite songs, or to record your favorite concert in MPEG4, look elsewhere. If — like me — you want a great (albeit a bit expensive) cellphone which can incidentally take pictures and record short videos and play a few tunes, then you can’t do better than the PEBL.

If I have one real ‘complaint’, it’s with the mirrored finish on the working surfaces of the phone. As anyone who’s ever used a cellphone with a large display can attest, that particular smooth surface picks up and displays oils and fingerprints you touch it, so I am constantly having to wipe it off with the tail of my shirt. It might not bother most, but me… yeah..