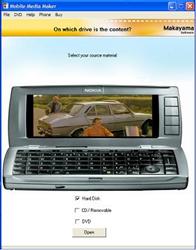 Review of Media Studio for Nokia 2.5.1

Current mobile phones are multimedia monsters and seeing that people are constantly trying to take their media along with them, numerous software companies have been releasing programs to feed consumers ever growing need for mobile media.

Today we will be looking at Makayama Interactive’s Media Studio for Nokia 2.5.1. Media Studio for Nokia now at version 2.5.1 promises ‘Blazing fast DVD to Nokia transfers.’ We tried Makayama’s latest and greatest to see how it does. Read on to find out more! Like always let’s start things with the features and requirements:

Interface
The Media Studio for Nokia 2.5.1 (Media Studio) consists of two main programs, the PC converter and the player that needs to be installed on your mobile phone. When you receive the package you get the phone-based player that is compatible with Symbian series 60, 80 (Only for 9300 and 9500) and 90 (Only for 7710). Our Nokia N80’s Symbian S60 3rd edition phone wasn’t supported by the phone-based player, but Makayama suggests using the built-in Real Player. These screenshots of the phone player is not compatible with the Nokia N80 or other Symbian 3rd edition phones.

When the software is opened you are greeted with a very simple and easy to use interface, asking you to you select your phone and choose the location of where you would like get the content from, you can choose from either: DVD, Hard Disk or Other. The ‘other’ is used for Video-CD, S-VCD or DVD recordable/rewritable that can not be converted as a regular DVD. The interface in my opinion is very clean and wizard-like in nature. It will definitely appeal to those who just want to get video on their phone without many options or confusing interface. On the other hand I know some users like a lot of options and a more advanced setup. In the future a button to toggle between advanced and simple mode would be nice. But right now with their promise of ‘two clicks’ DVD-burning they clearly aiming a certain group, our suggestions are important to cover the entire spectrum of potential users.

The Test
Our first test consisted of converting our DVD to a format that would play on the phone. We used Universal Studios Jurassic Park. At the first screen I obviously chose ‘DVD’, by doing this the DVD would automatically start playing. Next you are presented with two options: you can either start the DVD conversion process or go to the advanced options. Although it has been given the ‘advanced’ name, it’s not really what I would have called it, ‘More options’ would have been a more appropriate name.

Before the DVD conversion process you are presented with the last series of option: the Episode, Audio Dub and Subtitle. The longest episode usually is the main video. The converter also has some general options in the converter menu from where you can choose to limit the final video to a certain size. This way you can fit your video on a specific type of memory card size. You can also choose where temporary files are stored or toggle Mahayama’s Cyberpeed technology on or off. In the manual they claim that without the Cyberspeed technology the conversion process would take 5 times longer.

With everything ready we started the conversion process. The entire procedure took about 45 minutes for this 2.5 hour DVD, very fast indeed! When it’s ready you are prompted the following: ‘Ready, Move the video to your Nokia. It’s on the Desktop.’ This is a small detail but this makes a lot of difference as many programs place the converted videos in their own program directory or at some hidden location and playing ‘find the converted video’ is not my idea of fun. The final file is in MPEG-4 format with AAC audio with a resolution of 320×240 with a data rate of about 310 kbits/sec. Playback on the phone with the suggested Real Player is excellent: Video is crisp and clear with no stutter or audio lag. I would have liked to see the option to enable video at the N80’s native 416×352 screen resolution, but obviously Makayama Interactive was going for better performance. But I’m sure some users would sacrifice stutter-free performance for more video quality. Their decision for lower video resolution with the gain of superior performance is an understandable one, but allowing the user to choose is always better. I’m sure this is something they can add in the future versions. I also would have liked to see the video player on the phone ported to Symbian 3rd edition, as Real player lacks the fast forward or backwards controls. If you stop the movie and would like to go to a certain point in time with Real Player this is not possible at all.

Second test consisted of converting a 90 MB AVI video, again the conversion process was noticeably fast and the final product also looked clean and crisp on the phone.

Conclusion
Media Studio promises easy video conversion and it delivers.
It just takes a few clicks to convert the video in a format that the phone can understand. The interface is simple and easy to understand. I liked the feature that allows converting video to fit on specific card size. Even simple things like: telling you where the video is placed is a big plus. The entire conversion process is fast. It really comes down to the video quality and here it doesn’t disappoint either, video is crisp and clear. Media studio is just two steps of being perfect. I would like to see the phone media player ported to Symbian 3rd edition, as the Real Player just doesn’t cut it with its very basic media controls. I would also like to see the option to override the auto settings and manually choose a resolution and other options. The option of getting 416x352video for Nokia would have been better. Media Studio for Nokia 2.5.1 can be purchased at: http://www.makayama.com/dvdtonokia.html

Nokia Media Studio is perfect for those that want a no-hassle converter with good quality. It gets a good 8 out of 10.

Cons
-Hampered by real player’s limited playback options
-Phone Player needs to be ported to Symbian 3rd edition
-No option to set resolution manually/ no option to set more advanced interface
-For N80 resolution limited to 320×240 and not the full 416×352.