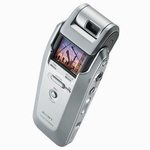 I have to admit many years ago when voice recorders used those itty bitty cassette tapes I coveted them greedily. I’m not sure why. It’s not like I have a great voice or anything really brilliant to say. It’s just a love-for-gadget thing. I’m sure you all understand.

The Sony ICD-CX50 visual voice recorder has evolved way beyond a simple tape recorder. Use the 256MB Flash Memory to save sounds and pictures.

LP Mode will give you about 93 hours of audio recording. STLP Recording Mode will give even more time. The built in Stereo Mic is the normal method for recoding, but you can also plug a microphone into the External Microphone Jack. Even though there’s a ‘Digital Voice-Up Function’ which lets you control the volume of the person who is speaking at some distance from the device, there are some circumstances in which this is not the best method. I can imagine a situation where there would be too much room noise (from an audience, for example) for this to work effectively. To check on the quality of your recording there’s a Built-In Playback Speaker.

The Camera has 1.2 Megapixels, which means it’s about as good as many cell phones. Not great, but usable. You can record JPG’s at a res of 640 x 480. And there’s enough room to store 4000 pictures. Use the 4X Digital Zoom to get up ‘close’. The Color LCD is 1.2 inches and is reasonable large enough to let you navigate around the image thumbnails to organize and view your files.

What is interesting about the ICD-CX50 is that it’s possible to record audio and images simultaneously. Basically creating a ‘synchronized file’. Use the USB 2.01 cable to transfer the files to your computer. What is also interesting is that you can recharge the battery using the USB connection to the computer OR an AC adaptor away from the computer.

Voice recorders may have been sold to businessmen for use at meetings and note-taking, but I can see this device being used by regular people. Imagine walking around your house or apt and cateloging your stuff for insurance purposes! Take a picture of your microwave, stereo, whatever and say something about when it was bought and for how much, etc. Get into a fender bender? Take a picture of the crunched bumper and the idiot who hit you (and his licence plate) while you get his ‘excuse’ for not seeing where he was going. GUILTY!! Yes, indeed, this can be quite a useful device, and it’s not just for recording my bad accent!