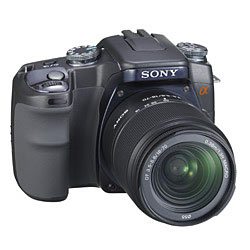 Introducing the Alpha A100

Photography for the past few years has had a series of drastic changes 35mm has been replaced by digital as the primary medium for professionals and consumers alike The fixed-lens point and shoot has given way to entry level Digital Single Lens Reflex (DSLR) cameras that give the photographer as much control as the professional 35mm SLR’s did years ago And with digitals rise, the names of the photographic game have changed, but the game itself remains the same Gone are Yashica, Konica, and Minolta and in their place, new companies rising to the occasion such as Panasonic and Sony

Sony purchased the camera assets of Konica-Minolta back in April of this year, causing some concern among those that had Minolta and KM series of lenses Some, understandably, jumped ship to other brands such as Nikon, Canon or Pentax Others, waited and watched With the unveiling of the Sony Alpha A100 those that waited were rewarded for their patience But what, exactly, were they rewarded with?

The stats for the Alpha on their own read like a DSLR buyers dream come true Every feature from in-body anti-shake to a simple and effective dust removal system has been added to the shopping list Combined with support for most Minolta Maxxum lenses and flashes doesn’t hurt either While Nikon and Canon grabbed the glory for their lens design, Minolta perfected a very solid and sharp lens system, which can deliver results comparable to their more notable brethren. But Sony now ups this ante, providing true Zeiss lens compatibility, with several lenses announced for the lineup

But, how does it perform? Shutter speed was found to be adequate, with focusing being notably faster with the standard lens than the focusing of other DSLR’s at the same price point Flash recharge was also found to be a respectable recycle time, allowing me to take pictures about once a second with a full charge The viewfinder was bright and sharp, allowing me to use manual focusing with few issues The camera felt solid in the grasp, however I did find myself wishing that it had a battery grip option whenever I wanted to do a vertical shot

The camera is able to use a Compact Flash type I or II by default, but Sony has included a Memory Stick Duo adapter as well In addition, the camera works very well with the optional Konica Minolta SD card adapter, allowing me to have a camera that can take any memory card from any of the cameras I have in my collection The ports for USB, DC and the remote are easily accessed, however the remote port is in a slightly awkward position, near the bottom corner of the LCD screen.

The control dial on top of the camera gave me quick access to most of the higher-end functions of the camera, enabling rapid changes to white balance, metering, and AF control The menu was virtually identical to that of the Konica Minolta Maxxum 5D, save for changing the color to a higher-contrast solution (light on dark)

In the end, all of the design work is for naught if the pictures don’t deliver Several of my friends expressed concern over Sony’s ability to deliver the quality image that they have come to expect from DSLR’s over the past few years A few quick snapshots, however, and those fears are found to be groundless The picture quality on the Sony I found to be crisp, sharp, and most of all, beautiful The color palette gives the picture a closer to reality hue that I’ve found lacking in competing DSLR’s in this price point The contrast I found to be more true to life, allowing me to see the details in the shadows and highlights with few issues Noise was found to be noticeable at higher ISO’s, but still within reason The RAW file support I found to be limited, however, not being usable by my primary photo editing program (The GIMP) but once loaded, gave me the freedom that I have grown accustomed to with RAW files, and I found that using the computer to convert the RAW into JPG files actually improved the noise levels to the top of the pack at even the highest ISO speed (1600)

As a first effort camera, the Alpha A100 has shown itself to be a very robust, and potent shooting platform If this is what Sony can deliver out of the gate, I am left to wonder, what’s next?