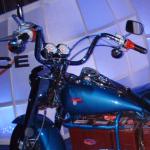 At this weekend’s NextFEST there were an amazing number of unusual vehicles. One that immediately caught my eye was something called a wheelsurf.

It looks like something I’ve seen on South Park. And that’s all I’m saying about that! The claim is that it’s a cross between a skateboard and a motorbike. I guess that makes sense. At some point a person actually rode around the room on/in it and I must say it looks interesting and even fun. The top speed is 30 MPH so no highway driving!

You better have good balance, however. I’m sure this must be good exercise.

Another vehicle best used for entertainment is the Bionic Dolphin. This one can hold two people for on and under the water fun and the idea is to be able to “swim” like a dolphin. This is an intriguing idea and worth investigating. Imagine filming from this vehicle so you convey the POV of a fish or sea mammal as it navigates the water. Cool beans!

The Discovery Channel has a program called Cool Fuel Roadtrips.
It features a motorcycle that uses a combination of electric and vegetable oil to power it. The fun of this show and the adventure therein are looking for any strange fuels can they find to use on their road trip. That looks like a mighty heavy bike.

This solar car can go up to 76 mph and broke a world record by traveling 9.6 miles without stopping, but something tells me this isn’t what mom will be using for shopping. As a one-seater powered only with solar panels over it’s body it’s really impressive. The driver can only see behind him be using a specially positioned camera. It must be really tight in there!

These sorts of experimental designs help push the envelope. And maybe someday mom really Will be shopping using a renewable resource vehicle. And that will be a good thing!

I hope you can see the picture clearly. As I walked up to this car I saw immediately what the point was. The paint job makes it look like an ear of corn. How subtle! All those cute yellow kernels made me want to run up and nibble at this car. GM has decided to jump on the GREEN bandwagon and is making a car that uses E85 ethanol for fuel. “E85” means 85% is ethanol made from corn and grain while the remaining 15% is is gasoline. A “Flex Fuel” vehicle is one that can be powered by gasoline OR E85 ethanol without the driver changing his/her driving style or or turning on special switches.

This is good for farmers and good for reducing carbon dioxide emissions.
According to GM there’s 900 E85 Fueling Stations already providing a place to “gas up” for the more than two million Flex Fuel cars out on the road. These cars come in a variety of models including Impala, Chevy Tahoe, Monte Carlo, Sierra and Silerado. I doubt they come painted yellow and green, but maybe you wouldn’t want a car that stuck out like an ear of corn in your driveway.
Check out the GM web site to learn more about corn and find links of groups across the United States which encourage this technology in their area. I can’t tell you how often my mother recites her mantra, “WHY don’t they use corn?????” Well, I guess I can tell her, THEY DO!!!!

What about the much discussed hybrid car? Well, GM is working on that. They have been making hybrid transit buses for a couple of years and have 2-mode hybrid cars and trucks for your driving pleasure. Great care has been taken to make these vehicles as luxurious and easy to drive.

Here’s the list of features that make a hybrid efficient:

The Saturn Vue Green Line Hybrid is available this summer.

An Entirely different approach to car design one using is GM’s Fuel Cell technology. A Fuel Cell uses hydrogen and oxygen and converts it to electricity which powers the car. The only emissions are water and heat. All this chemistry happens in the new chassis design because this is where the Fuel Cell does it’s magic. Plus this is where the electronics for steering and braking are. No gears, kids. Just look at the picture of the Hy Wire. Look through the lower window. Can you see the BIG SPACE in the front. Eh, no “engine” block! Only passenger legs will be found there! What impresses me about this car aside from the great front view is that the Gasoline-equivalent fuel efficiency is about 41 mpg. And no pollution!

The Sequel seems to look more like a typical car, but it’s using the same by-wire technology. There’s complete flexibility when designing such a vehicle. I’m expecting something that looks like the Jetson’s flying car Real Soon Now. GM is expecting the Fuel Cell cars to be available by 2010.