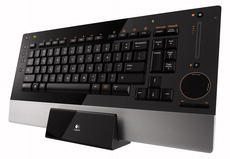 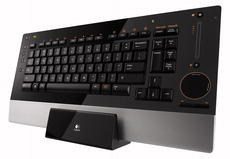 Logitech’s line of premium diNovo keyboards is not unfamiliar to us here at GadgetNutz, we reviewed the diNovo laser a while back and liked it a lot.

Stylish design is also a big part of the line: it comes with a high-gloss finish, is laser cut from a single, semi-translucent piece of black Plexiglas and set into a brushed-aluminum frame. Its minimalist style is further evident in the limited number of buttons and the dynamic, backlit icons embedded within the keyboard, which are invisible when not illuminated. Considering the keyboard’s many innovations and advanced technology they have managed to cram all of this in a very thin package, the keyboard is only 3/4-inches (19.05 mm) thick It follows the minimalist design theme with sharp angles and an ultra-slim profile and adds to this by reducing the number of seams and buttons on the keyboard, offering touch-sensitive technology and controls that are flush with the keyboard surface, and using dynamic soft-orange backlighting behind the single Plexiglas panel.

The diNovo Edge is also the first rechargeable keyboard, a two-hour charge yields up to two months of battery life. The rechargeable diNovo Edge comes with a stand that serves as both a recharging station and a display base. Control comes in the form of touch-sensitive navigation called ‘TouchDisc’ and touch-sensitive slider. The navigation features of the diNovo Edge keyboard were designed for usage with a PC, in the office or in the living room using Windows XP, XP Media Center Edition, or the upcoming Windows Vista operating system. For example, the keyboard has a special start key that launches the Vista start menu, and an F-key search button provides one-touch access to Vistaes search feature.

We expected the diNovo Edge to include a MediaPad as seen with previous version, but this time it wasn’t the case. We are hoping that Logitech will release this model in a mouse and keyboard combo and include the MediaPad remote and the new MX revolution mouse.