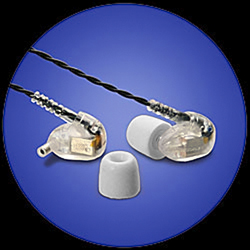 Wrap Your Ears in Luxury

We all know that the bundled ear buds that come as standard issue with all iPods and MP3 players basically stink. Manufacturers include them because they need to – but sound quality is not their forte.

The after-market Earphones/Headphones are so superior that it becomes almost mandatory for users to purchase a new pair of Earphones. What if you want the very best? Are you willing to fork over big bucks for big sound? If so, these two models from Westone Laboratories might be just what your ears have longed for. Never hear of Westone? Westone Laboratories Inc. was established in 1959 in the kitchen of the Morgan family log cabin. The business was based upon three simple concepts; absolute quality, friendly, efficient service and the Golden Rule. A lot has changed since then. Westone has grown to become the world’s largest manufacturer of custom made products for the ear.

You have heard of Shure Earphones which get incredibly high marks on virtually every web site and you have undoubtedly heard of Ultimate Ears, which took ‘best of competition’ in last year’s Holiday review. But here is something that I bet you didn’t know and the information came from Doug at Westone labs in a recent interview that I had with him: ‘

Westone did development and manufacturing for two of the most popular lines of earpieces in the market and now has a line of their own.

We spent the first years pushing other companies out there, so we are playing catch-up a little. It’s all good We like a challenge.’

That’s right – Westone made the amazing Earphones for both Shure and UE before both outsourced their manufacturing. Westone is now the only high end Earphone manufacturer who makes everything in the good ‘ol USA.

This review will focus on two of the ‘Consumer’ line of Earphones from Westone – the UM1 and the UM2.

The specs on the UM1’s are: Single Driver True Fit Earphone

Built to the highest professional standards, the single-armature UM1 True Fit Earphone offers superior sound performance at an unprecedented low price. The UM1 can provide up to 25 dB of onstage noise reduction and comes with a durable stereo ‘Y’ cord, padded storage pouch, wax loop and four pairs of compressible Comply(tm) Canal foam tips. Used by many top performers, the UM1 True Fit Earphone is the most affordable musicians monitor on the market. Available in clear only.

Built to the highest professional standards, the UM2 features dual balanced armatures and a passive crossover. Great highs and impressive low-end response make this universal fit earpiece the first choice for many touring pros the world over. The UM2 can provide up to 25 dB of onstage noise reduction and comes with a durable stereo ‘Y’ cord, deluxe carrying case, wax loop and four pairs of compressible Comply(tm) Canal foam tips. Available in clear only.

Basically, the difference (in lay-person terms) is single driver vs. dual drivers. The UM2 also adds a passive crossover and can handle the deepest bass notes.
Design:

Apart from the single driver/dual driver difference (which we will talk about in the Sound Quality section of the review) the design is very similar. The Ear pieces of the UM’s are a little on the large side – when compared to other in ear type Earphones. The housing containing the driver/s is clear (which is very cool) and the tips are soft ‘Comply’ ear tips that you mush together with your fingers and then cram in your ears.

Now, that may not sound fun or comfortable – but I am a true believer that this is the best way for Earphones to be designed. Once inserted into the ear canal, the foam tips expand to make an incredibly tight (and amazingly comfortable seal.)

The cord is hands down the best earphone cord I have ever encountered. It is braided for strength and lack of tangling and it is the perfect length. There is an adjustable piece of plastic to tighten the cord under your chin.

Like the Shures and the UE’s, the cord goes behind your ear and down your neck. Now, it takes a little getting used to to get these babies in – but when you do they stay there.

One very nice feature is that both the UM models comes with a hard, zippered case, extra Comply tips and they are packaged beautifully.

So, once you cram these Earhphones into your ear canal – what does it feel like? Well, the outside world disappears completely. The noise cancellation or sound isolation is complete. I might not reccommend these for jogging or bicycling because you can’t hear a car horn or a dog barking – nothing. But, for exercising, they do stay put and are very comfortable.

After you notice the sound isolation, the next thing that is noticed is that these are so incredibly comfortable that you can wear them for hours on end. I have two different sized ear canals and had trouble getting comfortable with many other in-ear style Earphones. Both pairs of Westone’s just fit so comfortably I cannot put into words the sheer joy of wearing these things.

Well, here is the biggest issue for many – how do they sound? Can they possible justify the expense? In a word, absolutely. For this part of the review, I will look at a few categories of music and note the differences/similarities between the two. The categories are: Female vocals, male vocals, instrumental, Rock and Classical.

Female vocals: The test track for this category was Tracy Chapman’s ‘I am Yours.’

The UM1’s handled her voice beautifully. Sound was crystal clear – the harmonies were pronounced. Tracy’s voice sounded full and the full range was very noticeable.

The UM2’s started with a fuller guitar sound. As pronounced as Tracy’s voice was on the UM1’s – it was even more so on the UM2’s. Her voice sounded deeper, yet also softer and ‘cleaner.’ Then the bass and tambourine kicked in and I found myself totally immersed and lost in the music.

Male Vocals: The test track was Elton John’s new song ‘Wouldn’t have you any other way’ from his new album. This track featured nice Piano music which was clear on the UM1’s – but a little muddled. Elton’s voice sounded magnificent.

The UM2’s started with a deeper, more resonate piano. Then Elton’s voice kicked in. In a word…wow! Every aspect of his voice was clearer not to mention the bass that wasn’t present on the UM1’s. The bass drum was so clean and deep – the symbols and guitar notes so pronounced. The piano was just beautiful.

The UM1’s handled this track fine – but the distinction between the instruments was not as clear as I might like. This was the ‘weakest’ track in the UM1 test.

The UM2’s immediately started with a crisper and more pronounced guitar. When the Lute and wind instruments kicked in I could actually hear the ‘breathing’ of the instrumentalists. Each instrument was noticeably clear and precise.

Rock: I used a live version of Aerosmith’s ‘Walk This Way.’

The UM1’s produced nice bass. The separation between the crowd and the music was handled nicely. Steven Tyler sounded great – guitar solos were clean and clear. Highs of the symbols and the cow bell were amazing.

I had to turn down the volume with the UM2’s listening to the same song. The Bass and the Bass drum were unbelievably strong. Everything sounded fuller. The Bass rocked, Tyler’s voice was ‘fuller’ and the Guitar screamed out.

The UM2’s added amazing percussion to the sound. The deep notes of the strings resonated just like I was at the Orchestra. Not only did I hear the Tambourines, I notices other percussion that I didn’t even hear with the UM1’s.

First of all, these two Earphones produce vastly different, yet similar quality sound. There is no question that the UM2’s produced consistently richer, fuller, more pronounced, cleaner sound with incredibly deep bass in every category tested. We have to remember the different price points of these two units. The UM1’s are priced at: Suggested Retail Price: $ 165.00
Special Web Price: $ 109.00

So, first you need to ask yourself how much are you willing to spend.

As far as the UM1’s go – if you have a hundred bucks to spend on a pair of Earphones you can’t not find a better sounding pair for the money. They are vastly superior to the Shure E 2’s – even superior to the E 3’s and to my ears, they sounded better than the UE Super.fi. 3’s. The vocals are clear, the instruments are warm and that totally subjective quality called the ‘Sound Stage’ was vastly superior.

The UM2’s, on the other hand are simply the finest Earphones I have every heard at any price. Last year I was blown away by the UE Super.fi 5 Pro’s and the Audio Technica ‘Ear Hanger’s’ – but the UM2’s are superior. I did a head to head against the UE Super.fi. Pro’s and found that while the UE’s had more punch to the bass – it wasn’t as clear nor as pronounced as the Westones.

The UE’s sounded ‘brighter’ in the high end – but the Westones just sounded more like music is supposed to sound. Everything was crisp, clear and just beautiful and warm. The ‘Sound Stage’ effect is as if the musicians are in your head – but you can distinguish where everyone is standing and where the music is coming from on stage.

If money is no object (and remember, you paid close to $300 for your iPod) and you want the best sound possible – order the UM2’s. If you want a tremendous upgrade to your ‘stock’ ear buds and can swing for a $100 pair – go for the UM1’s.

Both the UM1 and UM2 Earphones can be ordered at www.westone.com or other on-line retailers.