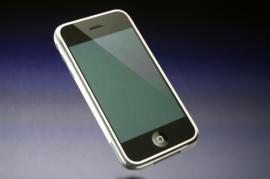 It might be anti-climactic to some – since the iPhone had been the most talked about unconfirmed product in Apple’s history — but…. the iPhone has been announced today. Although we are told that Cisco has the rights to the name ‘iPhone,’ this is the name by which this previously unseen device has been known for what seems like years. It looks beautiful – 11.6 millimeter device includes a 3.5-inch 480 x 320 touchscreen display with multi-touch support and a proximity sensor to turn off the sensor when it’s close to your face, 2 megapixel cam, 4GB or 8 GB of storage, Bluetooth with EDR and A2DP, WiFi that automatically engages when in range, and quadband GSM radio with EDGE. Perhaps most amazingly, though, it somehow runs OS X with support for Widgets, Google Maps, and Safari, and iTunes (of course) with CoverFlow out of the gate. A partnership with Yahoo will allow all iPhone customers to hook up with free push IMAP email.

Apple quotes 5 hours of battery life for talk or video, with a full 16 hours in music mode — no word on standby time yet. In a twisted way, this is one rumor mill we’re almost sad to see grind to a halt; after all, when is the next time we’re going to have an opportunity to run this picture? The 4GB iPhone will go out the door in the US as a Cingular exclusive for $499 on a two-year contract, 8GB for $599. Ships Stateside in June, Europe in fourth quarter, Asia in 2008. Thanks to Engadget for breaking this one with all the photos – see them all by going to:http://www.engadget.com/2007/01/09/the-apple-iphone/

Apple also released a new Bluetooth headset and a new pair of Headphones which take advantage of the new Cellular capability of the iPhone. Keeping in line with Apple’s minimalist design ethos, the Bluetooth headset appears from the side as a simple, thin, 2001-esque, black slab. It only has one button (on the top) and is apparently ‘incredibly small.’ Apple has also unveiled a new set of stereo headphones that accommodates the iPhone’s cellular functionality. Similar to wire based hands-free kits, it has a small white box halfway up the wire with an integrated microphone and a ‘squeeze’ switch for answering and hanging-up calls. No word on pricing and availability yet.