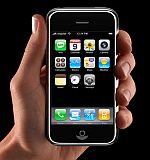 iPhone – A Thing of Beauty

It might be anti-climactic to some – since the iPhone had been the most talked about unconfirmed product in Apple’s history — nevertheless, the iPhone was announced at MacWorld yesterday and the crowds (and press) went wild! This new cellular phone has been developed in an exclusive US partnership with Cingular and has grabbed more attention than the Treo, Blackberry and Q combined. After all, this device is not only the iPhone everyone expected, it’s also the long overdue Apple PDA, Internet table, Video iPod and everything converged into one device.

Completely upstaging all that was happening at CES (the Consumer Electronics Show) — including the launch of the new Treo 750 (also for Cingular) — Steve Jobs made one of his typically incredible presentations that left everyone in the room – and everyone else in the world wondering just one thing – ‘when can I get one of these?’ (hint: June)

Although we are told that Cisco has the rights to the name ‘iPhone,’ this is the name by which this previously unseen device has been known for what seems like years. A major news carrier today confirmed that Cisco and Apple have been in negotiations to clear the way for Apple to officially use the word ‘iPhone.’

How does it look?

It looks beautiful – the 11.6 millimeter device includes a 3.5-inch 480 x 320 touchscreen display with multi-touch support and a proximity sensor to turn off the screen and light when it’s close to your face, 2 megapixel camera, 4GB or 8GB of storage, Bluetooth with EDR and A2DP, WiFi that automatically engages when in range, and quadband GSM radio with EDGE. Perhaps most amazingly, it somehow runs OS X with support for Widgets, Google Maps, and Safari, and iTunes (of course) with CoverFlow out of the gate.

Let’s take a look at the highlights:

Battery:
Up to 5 hours Talk / Video / Browsing
Up to 16 hours Audio playback

iPhone is a widescreen iPod with touch controls that lets you enjoy all your content – including music, audiobooks, videos, TV shows, and movies – on a beautiful 3.5-inch widescreen display. It also lets you sync your content from the iTunes library on your PC or Mac. And then you can access it all with just the touch of a finger.

That’s right – no stylus whatsoever. The patented screen technology is, like pretty much every Apple product, revolutionary. Just point your finger and touch the screen. From what I can tell, the patented ‘virtual click wheel’ concept seems to be incorporated in the iPhone.

iPhone is a revolutionary new mobile phone that allows you to make a call by simply pointing your finger at a name or number in your address book, a favorites list, or a call log It also automatically syncs all your contacts from a PC, Mac, or Internet service. And it lets you select and listen to voicemail messages in whatever order you want – just like email.

What I liked in the demo, is that your voicemail is accessed on the phone itself – just touch the voicemail button and you can interactively select and listen to your messages .

iPhone also knows how you’re holding it, straight up or horizontally, and adjusts the screen to the correct orientation automatically.

Is it a Smart Phone?

Absolutely and perhaps absolutely not – at least not in the ‘traditional sense’ we are used to. I am not sure this is going to steal Blackberry users or high power Windows Mobile users who are constantly editing spreadsheets and Power Point presentations. But, for the rest of the world, this might be just what we need. iPhone features a rich HTML email client and Safari – the most advanced web browser ever on a portable device – which automatically syncs bookmarks from your PC or Mac. Safari also includes built-in Google and Yahoo! search. iPhone is fully multi-tasking, so you can read a web page while downloading your email in the background over Wi-Fi or EDGE. No 3G support – at least not yet. With OS X under the hood it’s certainly got the capabilities to be the smartest of smart phones out there, but as reported in Time magazine, Apple may be preventing third party software from being installed on the phone. A move that may quickly dumb down this smart phone.

iPhone features the most revolutionary user interface since the mouse. It’s an entirely new interface based on a large multi-touch display and innovative new software that lets you control everything using only your fingers. So you can glide through albums with Cover Flow, flip through photos and email them with a touch, or zoom in and out on a section of a web page – all by simply using iPhone’s multi-touch display.

iPhone’s full QWERTY soft keyboard lets you easily send and receive SMS messages in multiple sessions. And the keyboard is predictive, so it prevents and corrects mistakes, making it easier and more efficient to use than the small plastic keyboards on many smartphones. It looks like it might take a little getting used to this kind of design – but it looks very intuitive. Bear in mind that this keyboard is entirely virtual and with multitouch allows faster entry When dialing you have a keypad for entry. When you are on other screens, you use icons or intuitive gestures to access all the phones features.

I wish it supported 3G or HSPDA, specifically, since it is debuting on Cingular’s network. I also wish that the original idea (or maybe it was just a rumor) of releasing an unlocked iPhone that could be used with CDMA as well as GSM networks was available. Lots of us CDMA folks are tied into our carriers for a couple of years.

What Steve Jobs has done is opt for the worldwide standard of GSM. Sprint and Verizon use CDMA which they’ve managed to do very well with. What remains to be seen is whether the iPhone revolutionize and change the market in this country. Will millions jump to Cingular/ATT? Well, yes. The question is, will enough jump? Will the iPhone be sold in a generic GSM brand so T-Mobile users can use it?

4GB and 8GB are pretty decent configurations for memory but it would be nice if Apple recognized the SD standard so users could expand the iPhone memory themselves. The lack of a user replaceable battery is also worrying since mobile phones often wear out batteries.

I’m also concerned over the possibility that Apple might lock out, or require control over, all third party applications. A truly smart phone needs to have third party software support to include all applications Apple doesn’t think of or doesn’t want to create.

Finally, I know I’m not the only person worrying about ear wax mucking up the screen! Pass the iWipes!

The 4GB iPhone will go out the door in the US as a Cingular exclusive for $499 on a two-year contract, 8GB for $599. Ships Stateside in June, Europe in fourth quarter, Asia in 2008.