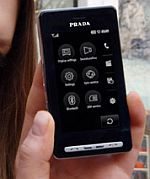 LG Electronics, a pioneer in consumer electronics and mobile phones, and PRADA, one of the world’s leading brands in the luxury goods industry , unveil the first completely touch screen mobile phone.

The PRADA Phone by LG (KE850) is a real breakthrough in the industry, as it is a unique, sophisticated and elegant mobile phone with the first complete advanced touch interface.

LG and PRADA have worked closely together on every aspect of the product, from handset development to marketing combining the attention to detail and uncompromising quality of PRADA design with the trademark technological innovation of LG mobile. PRADA’s involvement extends beyond exterior aesthetics to the key elements of the user experience such as the advanced touch interface, ring tones, pre-loaded content, mobile phone accessories and the exclusive leather case, inspired by the classic Italian craftsmen tradition.

‘We at LG are exceptionally proud of the PRADA Phone by LG’ says Dr. Scott Ahn, President and CEO of LG Electronics Mobile Communications Company. He continues, ‘The two companies have worked together seamlessly towards a truly shared vision, to develop one of the most beautifully stylish handsets the market has ever seen.’

Visiting LG Headquarters in Seoul, Korea, Mr. Patrizio Bertelli, President and CEO of PRADA, said: ‘As we do with ready-to-wear and accessories, we were looking at a break-through. Consistent with our approach, we are not branding an existing product; rather, Miuccia and I have been working with LG to give this new phone a very strong character and unique style, both in its contents and in its design. We, just like our partners at LG, are known for the attention to detail and uncompromising quality of our products. And we find these characteristics in the new mobile phone.’

The PRADA Phone by LG introduces the world’s first advanced touch interface which eliminates the conventional keypad making the overall usage experience a highly tactile one. An extra wide LCD screen maximizes visual impact, allowing the user to benefit from several key features of the phone, including the 2 megapixel camera featuring Schneider-Kreuznach lens, video player and document viewer capacity. Above all, these features contribute to the phone’s beautifully sleek and simplistic appearance.

Glowing icons on the face of the phone disappear when not in use to reveal a pure, un-adulterated black exterior. The phone is ultra thin (just 12 mm), nonetheless it hosts an array of additional multimedia functions, including an MP3 player and a music multitasking function for messaging. It also boasts an external memory slot, allowing the user to increase memory capacity for images, music and film clips.

The PRADA Phone by LG will be available with prices starting from 600 Euros in mobile dealerships as well as selected PRADA stores in the UK, France, Germany and Italy as of late February, 2007, followed by countries in Asia such as Hong Kong, Taiwan, and Singapore from late March, 2007. The Korean version of the phone is scheduled to launch in the second quarter of 2007.