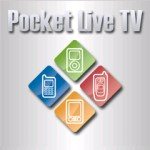 Ok, so that doesn’t roll off the tongue like ‘I Want My MTV’. But there’s something quite cool about having TV be portable. If you have a Pocket PC phone with a WiFi or 3G connection then you too can get Pocket Live TV. I’m using my Cingular 8525 which is one of many models that can use this program. Instead of a data-plan just buy this software once and the 100 channels from about 10 countries are at your beck and call.

Once you get the PocketPC.installer file you have two methods for installation. One is via ActiveSync with one exe file and the other is to take the second file: Pocket Live TV.exe and copy it to the memory card. I tried the second method. When you click on the cab file in the phone you get the choice of installing in the phone’s internal storage or the memory card. As I have a ton of software using the internal storage (and running out of memory) I decided to try putting it on the card. Anyway, the phone was complaining about being DANGEROUSLY LOW on memory. Ouch!

Pocket Live TV uses Windows Media Player to stream the signal. To make sure the picture is scaled up as far as it can be turn off the scaling in the Options Menu of the Windows Media Player. See the animation I made of the various screen shots. Most streams are broadcast for QVGA resolution (320×240).
Once it’s installed I make sure to turn on WiFi because I get better reception. Then I click on

to start Pocket Live TV. After a few moments a screen comes up where you type in your Activation key. This is a number that is sent to you when you buy the software. After that, you are good to go!

You are presented with a start screen and touching the Big Arrow sends you to the Countries Page. Touch whichever country you want to explore. That sends you to the Channels for that country. Pick a channel and if it’s online and available you should see the stream start to buffer and play.

I noticed that some channels have audio and no video (dark screen). This can happen for a variety of reasons. Some of which have to do with the stream and the broadcast rather than Pocket Live TV. Not all channels are online all day. Sometimes you will see a notification that the channel you picked is unavailable. And when channels just go permanently offline the software automatically replaces that spot with another channel.

I connected to BBC News to try it out and while it started with a video at first, it soon went dark – with only the sound playing. I’ll continue to keep testing this, but I expect that there will be times when the signal or parts of it will simply not come into the phone. Still, I love that I can access about 100 channels from 10 countries. That’s just very cool.

I also tried popping open the keyboard to change the screen aspect and Pocket Live TV works in either screen direction. The pause / play GUI works without issue. Unless there’s a problem with the stream, there doesn’t seem to be anything wrong with the software that’s annoying. I do wish that future version of Pocket Live TV let the user change players. I’d be interested in seeing how well TCPMP works with Pocket Live TV. I know TCPMP works great with streaming Sirius. I’ve reviewed SiriusWMS in another of my 8525 articles. And I found that TCPMP is more reliable than Windows Media Player when it comes to handling streams.

While it’s not possible yet to add more customization to Pocket Live TV like adding the channels you want, etc. the Makayama company seems open to suggestions from customers. I’m feeling very good about this and what can be possible in the future.