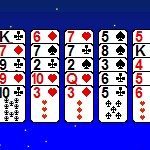 Paragon Game Software on my 8525 keeps me off the streets

Paragon Software makes a variety of games for Windows Mobile Pocket PC as well as other devices. But I’m here to talk about the two games on my 8525. It’s easy to download the games right from the web site (direct links provided below). Download the trial versions which are available for free. When you buy the games the company sends you a code which you insert into the game screen when asked. A demo is a full game for a particular length of time. But these games are very much worth the price.

You can install the game via ActiveSync and if you have the code install it then. I did that for one game and for the other game installed the code after the game had been saved to the phone. Both methods work flawlessly. And all games get installed in the Games folder in your phone.

Top Hits Solitaires I’m a simply solitaire card gamer but this impressive set of various card games will satisfy any taste. My only “complaint” is that I can’t make the Klondike game switch to Open one card instead of Three cards. But that’s because I’m lazy and want to win with less effort. (LOL) Pay no attention to me. All the games are fun.

Even when you aren’t familiar with a particular game there’s a feature which shows available moves so you can experiment. Plus, each game has a Demo mode and the Rules are available for reading – if you want to delve into the mysteries of Rules.

What is Very important to me is that the card faces are very readable – this isn’t always true of free games where you end up needing to use an electron microscope just to make sure you are placing a Red Queen on the Black King. This is a great feature on a small device. There’s no fun playing a game when it becomes too painfull to see.

You can change both the background and card backs at any time during a game. Even have them change at random whenever you start a new game. There’s a Smart toolbar – which is a very cool feature – pick from a list of options to place them on your toolbar. Whatever you need during your gameplay is right there waiting for you. You can also Bookmark a game during play and return back to it. Sort of like undoing history. If only that was possible in real life. Ahhhh. Really, this is an impressive set of card games and it all fits on a phone.

AnotherBall reminds me of a great game on my Amiga called MetaBall. It was one in a long line of arkanoid-type games. And it seems to be everyone’s favorite. After all, if a non-game-player like myself enjoyed it, it’s the kind of game that’s got real staying power.

Because almost all of us have played arkanoid, we all understand how to operate AnotherBall. Plus, AnotherBall is colorful, “mindless”, easy to play and responsive. All you need is your stylus.

As you can see from the screen grabs you are presented with an opening screen which reminds you of the last top scores. If you wait before touching the screen it cycles through the various game icons. Once you touch the screen the game starts. The ball sits waiting for you on it’s paddle. Since you control the paddle from the stylus it’s very simple to move it where you want and start the ball bouncing. I haven’t gone through all the boards, but the game works fine with the keyboard pulled out in “Landscape” mode.

There’s the usual “exploding” sounds, some “glass” breaking and if I ever get to more advanced game screens I’m sure I have some surprises waiting for me. Can’t wait! Yup! this is a fun game.