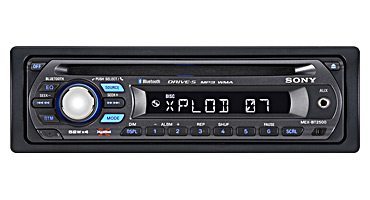 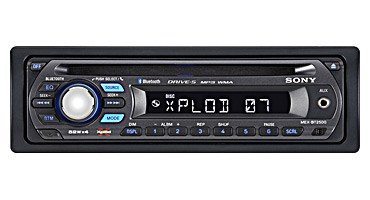 Every so often, it is time for us here to make a bold statement – so, here goes. With today’s technology, there is no excuse for not using some sort of handsfree device when you drive. There, I said it. I just can’t believe how many people still drive with one hand on the wheel and the other hand clutching their phone to their ear not paying attention to the road in front of them.

There are so many options today from the very basic wired headset to Bluetooth in-the-ear headsets to Bluetooth car kits. One area that may make the most sense is just beginning to make its way into our cars and that is Bluetooth built in to Car Stereos. Some manufacturers of Automobiles like Lexus, Acura, Toyota, Nissan and others are now offering this as an (albeit expensive) accessory and that’s great.

For those who don’t have this built into their cars, there is still hope. Companies like Parrot have been pioneering this technology (see my review of the Rhythm N Blue.) Now, Sony gets in the act in a very affordable way.

The Sony MEX-BT2500 is an after-market in-dash Bluetooth Handsfree Car Stereo and it costs under two hundred bucks! Read on to see if perhaps this is the way to go to add the necessary safety and convenience or handsfree calling in your car. I have been looking for a new Bluetooth Car Stereo for a while. As I thumb through the catalogues, I always take note of the small print like ‘add bluetooth handsfree technology for only $200.00.’ Until recently, that seemed to be the norm – pay $200.00 for a good quality after-market Car Stereo and then another $200.00 for bluetooth built in. Then I ran across an ad that quite frankly, I thought was a mistake – a high quality Car Stereo with built in bluetooth for under $200.00. One click and I was on the Crutchfield web site and ordered the Sony MEX-BT2500 and they threw in all the hardware and wiring necessary to easily install this in my car.

Here are the features of the MEX-BT2500 from the Sony Web site:

Bluetooth
Wireless freedom at your fingertips

Front Panel Aux In
Plugging your portable audio devices into your car’s sound system is like stealing candy from a baby.

Xplod Power
So, just how much power is enough? As much as possible!

Drive-S
The latest chassis design that will help improve sound quality and durability of our head unit.

Best Tuning MemorySetting your radio presets can be a real pain while you’re driving-especially if you’re in an unfamiliar area. So, let the tuner do the work for you!

CD Text
What was the name of that song? Now, with CD TEXT, your player can tell you the name of each song on a CD!

On to the review……

The MEX-BT2500 looks like a standard, single DIN Car Stereo. It has a nice, large volume control knob on the left hand side which has a nice rubberized texture to it. To the left of the control knob are the small EQ buttons (various pre-set EQ settings are offered,) the seek down button and the Blue Tooth Manager button (used for initially pairing the stereo with your phone.) To the right are the Source button (to choose FM, AM, AUX, BT Phone or BT Audio,) the seek up button and the Mode button.

Along the bottom are the standard buttons for pre-sets, CD controls and display settings. The ‘Off’ button is a small button in the upper left hand corner and there is a button to remove the faceplate in the lower left hand corner.

The buttons were small, but offered a positive feel and were easy to use. The MEX-BT2500 also comes with a wireless remote which can perform all the major functions of the Stereo.

Installing a car stereo is not for the faint of heart – ripping apart your dashboard and extracting the radio can be a challenge even to gadget freaks. That being said, my 15 year old son and I had amazing ease in installing this Car Stereo into my Honda Civic Hybrid. If you have never dealt with the folks at Crutchfield before, they give you a schematic of your car with precise directions as to how to remove the radio and install a new one. They even throw in a professional looking ‘fit kit’ for your unique vehicle in which the radio sits and looks like it was ‘factory installed.’

So, out with the old and in with the new. Well, we did have about 14 wires to splice and attach – but it was as easy as red to red, green to green and so on. Then I just had to ground the black wire to some metal behind the dash and we were set to slip in the new unit. It worked like a charm on the first try.

Bluetooth is the defining feature of this radio – so we will deal with that first. The first order of business was pairing this Stereo with my cell phone. I used a BlackBerry Pearl (compatible phones are listed on the Sony site) and had no problems. I searched for the Stereo using the bluetooth feature of the Pearl, put in the magic pass code and that was it. From that point forwards, every time I turned on the Stereo, it automatically sensed the phone was nearby and the ‘Bluetooth connected’ icon appeared on the display.

Each time a phone call came in, the Display would flash ‘Bluetooth Phone’ and it would ring through the speakers. I just push the select button (volume) on the stereo and the call came through loud and crystal clear through the car’s speakers. Pretty much every call was very loud and clear on my end.

When the call ends, I just push the select button to end the call or I could push the red button on the phone.

The microphone is built in to the face of the unit. I did have a couple of callers tell me that I sounded like I was far away – or that they could hear background noise. Ultimately, everyone could hear me – sometimes I did have to talk a little louder. Some bluetooth stereos add a separate microphone that clips on the visor (like the Rhythm n Blue) and that might have been useful here – but I don’t think it was necessary.

One of the other nice features is that the MEX-BT2500 supports Bluetooth Stereo Streaming. That means that if you have another bluetooth device (even your phone) you can send your music wirelessly to the MEX-BT2500 and listen through the stereo – a very nice added feature.
The MEX-BT2500 as a Stereo:

The MEX-BT2500 is a great full featured car stereo. The sound quality was terrific (better than the Rhythm N Blue.) There are several EQ options depending on the type of music you listen to and the XPLOD setting which adds a significant boost in the bass. The power of this unit seemed very clean and was capable of volumes much louder than I deemed safe to listen to (although my kids seem to have a different idea about that.)

Adjusting the tone controls, volume, changing stations, setting pre-sets, navigating through CD’s and more were all very easy to accomplish on the MEX-BT2500. The remote is a great feature to adjust all these functions on the fly.

The removable faceplate is a great security feature that was easy to use.

The added bonus of this Car Stereo was that in addition to built in bluetooth, this unit has a built AUX in jack right on the front. Many car stereo manufacturers charge a premium for an AUX in jack – but this was standard. That meant that my iPod could plug right in the front or my Satellite radio could right through the AUX jack which provides a much cleaner sound than going through the fm-transmitter.

In short, the MEX-BT2500 sounds great and for me, was a major upgrade in sound quality for all my music.

Let’s see, for under $200.00 I get built in Bluetooth, a great Stereo with plenty of power, a built in AUX in jack and reliable Sony quality. This sounds like a winner to me. The MEX-BT2500 just seems to offer so much more bang for the buck than just about anything else I have seen out there. It was easy to install myself, sounds great and gives me the freedom of total handsfree talking while I drive.
Final Grade: A

Cons: People on the other end could tell I was using a hands free device

The Sony MEX-BT2500 is available for $179.00 from www.xplodsony.com and even cheaper from sites like www.crutchfield.com (and they throw in wiring harnesses and attachments for free.)