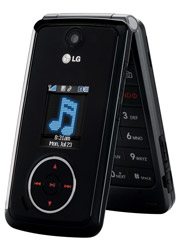 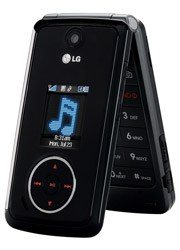 There are so many slick phones out there right now that it is hard to decide on the right phone. For some, it will boil down to features. For others, it will be price that serves as the determining factor. Others will have to see if the latest and greatest phone actually has service where they live to avoid purchasing a beautiful paper weight.

Many users are drawn to an eye catching design, and LG has been producing some beautiful designs as of late. Sprint users never did get a version of the ‘Chocolate,’ but now they get an exclusive on a design that might be even nicer – the Muziq.

Picture the Chocolate combined with a Flip Phone design and you have a sense of the Muziq. To see all the features that LG packs into this stylish phone – just read on for a full review. Cell phone exclusives may drive us crazy – think iPhone and ATT – but if you are a subscriber and your carrier gets a great phone before anyone else – it can be terrific to be the first one on the block with something unique that stands out from the crowd.

The LG Muziq stands out from the crowded, popular Flip Phone crowd in a few areas. The following are the highlights and specs from the company web site:

Sprint Music Store Enabled
Download stereo-quality tracks instantly to your wireless phone or PC. Choose from thousands of artists in virtually every genre, and listen wherever you go.

*Speakerphone feature is only available while a call is in progress.
**Not assignable from microSD card.

Standby Time
Up to 12 Days*

The Muziq is a basic Flip design with a couple of interesting additions. When the phone is closed, you immediately notice the almost lacquered looking finish. There is a large color screen on the front and directly underneath sits a music navigation pad (very reminiscent of the Chocolate.) The navigation pad is touch sensitive (more on that later) but it was pretty easy to operate and navigate.

On top of the screen sits the requisite camera lens and flash. Speaking of the camera, LG included a 1.3 mega pixel camera with zoom and flash. A 2.0 or 3.2 mega pixel camera would have certainly offered better image quality – but I do understand that compromises need to be made somewhere.

There are dedicated external keys along the side of the top of the phone for Music and the Camera (on the right hand side) and Volume (on the left hand side.)

When the phone is opened, the standard keypad has a ‘Speaker’ key above it to the left and a ‘Camera’ key to the right. Above the key pad in the center is a nicely designed D-Pad.

My daughter’s view was that ‘ It is very sleek. It reminds me a lot of the phone the Chocolate. They both have around the same exterior features, but instead of sliding up like the Chocolate, the Muziq flips. The music control pad located on the front is pretty awesome’.

The Muziq as a Phone:

The Phone features are pretty basic on the Muziq (which is not necessarily a bad thing.) Making and answering calls is very straightforward. The Muziq can store 500 contacts and 98 speed dials which should satisfy most user’s needs.

The one button speaker phone is a great feature. The Muziq has Sprint’s Voice Command program built in – which is a very good voice recognition/voice dialing program.

Over 30 ringtones are built into the Muziq and they sounded loud and clear. You can also assign ring tones that you buy or even MP3’s on the phone to serve as Ring Tones – so every caller can be customized with their own, unique ring tone.

The Most important feature of any phone is the Call Quality and here, the Muziq shines. Calls were very clear on both ends. I rarely encountered static and when listening to calls on the other end there were no issues to speak of – which for a cell phone is a very good thing.

Music on the Muziq :

Clearly (by the name alone) it is easy to tell that this phone was called the Muziq for a reason. The music features of the Muziq are robust. Music can be played without opening the phone – just unlock it and hit play on the external music pad. All your music can be navigated through and played through the external controls.

Opening the phone gives you access to all the music features of this phone. The Sprint music store is among the best of the major Cell Providers. It was easy to navigate through the store and the $.99 price was fair. Music can be stored on the Micro SD card (the bigger the card, the more music you can fit.)

Playlists were easy to create and navigate. Most importantly, sound quality was great – as my daughter said: ‘Sometimes I even forget that I am listening to my phone. I think it is my ipod.’ What greater compliment can a 12 year old give?

Sprint’s included Music Manage is one of the better music management software applications. It was pretty easy and straightforward to transfer music from the PC to the phone or the Micro SD card. It was also very easy to purchase music from the Music Manager program for both the PC and the Muziq.

For me, one of the nicest music features is actually part of the ‘Music’ features is found in the ‘Power Vision’ services of the phone – namely, streaming music. Sprint has its own Music stations that stream beautifully over their fast EvDO network and there is also the availability of subscribing the Sirius Satellite radio. Throw in Bluetooth Stereo (which I will discuss below) and this just about perfect for me.

The Muziq offers some unique music features not found on other phones. One is the ability to compose a melody. You can hum a tune into the microphone and then use that as a ring tone. You can then ‘arrange’ your melody with instruments and rhythms. You can also use the keyboard to input a melody.

Additionally, the Muziq comes with a built in FM transmitter. Frequency can be adjusted along the FM spectrum. So, let’s say you were in your car and wanted to listen to your music over the car’s FM radio – just start playing your music, select the FM frequency and turn the transmitter on – who needs an external Satellite radio?

The Muziq offers a pretty basic 1.3 mega pixel camera. Image quality was OK – above average for a 1.3 camera – but image stability was another thing. I found that the phone had to be held pretty steady to capture an image without blurring. As my daughter noted :’It takes fantastic pictures when you correctly capture them.’ Where the Muziq does excel is with the ease with which you can send your images via MMS, Email or uploading to Sprint’s Picture album program on the web.
<
r/> Bluetooth:

Happily, the Muziq supports A2DP – which is streaming Bluetooth stereo. That means that if you pair your Muziq with a good set of Bluetooth Stereo Headphones you can listen to you music in stereo without wires – a great feature. This works with music on the Micro SD card as well as streaming music from the Power Vision service.

Bluetooth headsets paired easily and sounded great with the Muziq.

The Muziq can access Sprint’s game download service and there were hundreds of games to choose from. Some are monthly subscriptions and some are just one time fee downloads. Games loaded reasonably fast and were easy to play using the keys and the D-pad of the phone. The screen made the games look great.

I my estimation, Sprint has the best multi-media content offered by any of the major Cell Providers. From streaming music, to Sprint TV which allowed me to watch favorite episodes of TV shows as well as news, sports, weather and movies – there is a lot to like about the Power Vision service.

Navigation was easy on the Muziq and the combination of the network speed and phone speed made for a very high quality of streaming multi-media content. Now, you are still watching on a tiny screen – but the image quality was actually quite good.

The Muziq, by LG is a full featured, nicely designed and constructed Multi-Media phone. Music is definitely its forte with the ability to buy, download, play and stream music all from the phone itself. As a phone, it was easy to use and had good call quality. Sprint’s EvDO network is fast and reliable – as long as you have service in your area. Add in a decent camera, games and video playback and you have a pretty full featured phone.

While Email and web browsing are supported and included, they are not the strengths of this phone. If you are looking for a BlackBerry – this is not the phone for you. If, however, like most users, you want a good, easy to operate phone with strong music features – this would be a great choice for you. At $99.00 in Sprint stores and $79.00 at www.sprint.com you can save about $400 over the cost of an iPhone and have Stereo Bluetooth and Streaming Satellite radio and Live TV feeds – not bad at all!

Cons: Camera is not the strong feature of this phone, proprietary jacks mean you have to carry adapters with you

The LG Muziq is available from www.sprint.com and in many stores and from many on line retailers for $99.00 or less with a two year agreement. Power Vision services add $15.00 – $25.00 to the basic plan costs.