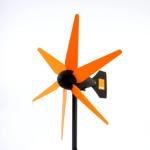 Cecilia·August 27, 2007
News from the Leading Edge 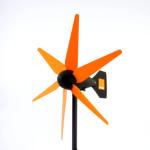 Intelligent people know that there’s lots of Energy out in the universe and what we need to do is find it and use it. Most people have to change their view of Energy. It’s doesn’t have to be connected to some HUGE infrastructure. Sometimes it can be as small as fitting in the palm of your hand.

I’ve reported on Wind and Solar energy seen at last fall’s NextFEST in my Article here. That technology is what most people know about Solar and Wind power. Large enough to rest on the roof of your home or office. There’s even a student design to adapt Highways into Windfarms. It’s a really clever way to use existing land for two purposes. And it even looks attractive!

But let’s think smaller. Like in this Article about using solar power to recharge your cell phone. It’s a portable, small device. And it means you can use power anywhere in the world there is Sunlight.

You can now also use Wind Power to Recharge your Mobile Phone. Orange Wind had GotWind to design this clever portable wind generator. It’s designed to fit most modern dome tents – just tie it down to the top of your tent. Overnight your phone can be recharged while you rest. And obviously, you can attach this wind generator anywhere. Your boat, your camel, your beanie (?) And considering how important GPS can be for people out in the “wild”, keeping your cell active may just save someone’s life.

The Battery Revolution is happening right now. Imagine taking what looks like a piece of paper, cutting it with scissors to fit into a space or bending it to conform around a shape. WOW! and it’s a battery. How cool is that? Now the battery is no longer this annoying “brick” that the device has to be designed around. The battery can actually be part of the design. It can become the Outside of the device, or part of one end. And devices can be designed more ergonomically, more artistic and beautiful. The limit is only the imagination.

Here’s a video of the news report. Stuff like this just fascinates me.

How Sweet It Is

You think that’s something, how about a Sugar Battery? The sugar battery contains enzymes that convert sucrose into electricity. The main byproduct is water making this battery safe (if not a bit moist) and the entire battery is biodegradable. And sugar water is certainly an easily found fuel source. Especially at an Duncan Donut shop. But seriously, this is the sort of technology that all countires, however poor, can enjoy. Just grow some plant with sucrose – there’s lots of those, and BAM! sugar battery! With no pollution to deal with. And being able to grow your own power source means economic independence.

And this is the kind of technology that could work nicely with small devices that need to be recharged regularly. Pop in a sugar battery, Recharge, then throw the used battery in the potted plant to water it. Now that’s the ultimate in recycling.

One of the issues with Solar Panels is that they are large, heavy and expensive. But if you put a smaller amount of silicone on plastic, you can have a lighter, cheaper solar sheet. Stan Ovshinsky is the inventor of thin-film photovoltaic (PV). And people should be holding Parades for this guy and his wife. Check out the various Ovshinsky inventions to get a sense of the enormous talent of these two.

As you can see in this video explaining how to install thin film PV solar panels, it’s available now. Thin-film PV is shipped in 16-inch-wide rolls. Because it’s a peel-and-stick laminate, just unroll the sheet and apply it to your roofing panel. Instructions available here. It can be done by any bunch of construction guys. Or anyone brave enough to climb a ladder, I suppose.

How about being able to print your own Solar panels whenever you need some electricity? Whip out your inkjet printer and print out a few sheets. Slap those beauties on a wall and BAM! instant energy. Wouldn’t it be neato if you could print out some photovoltaic plastic onto cloth? Your curtains could become power sources. Your furnature could suck up some light during the day and be glowing in the evening. You could be walking around with a sweater that not only warmed you but recharged your cell phone. The jewelry possibilities boggle my mind (I should start making designs right now).

Right now the efficiency of plastic solar cells is more than 6 percent – twice what it was a couple of years ago. And I we can expect it to improve.

Renewable energy is not child’s play. Choose any, choose all!