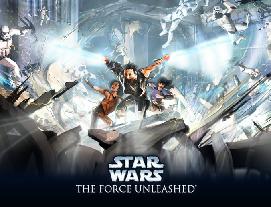 As you may or may not know Nokia will be launching the N-Gage platform (a sequel no less!) this December, but this time it won’t be a device like the N-Gage QD, but rather an entire gaming platform with online gameplay, allowing millions of Nokia Nseries owners to play, instead of just one device. Many impressive titles will be available and now we can add another one to the list: Star Wars: The Force Unleashed. One thing worth noting is that this title won’t be available when N-Gage launches this December as Nokia, THQ Wireless, Lucasfilm, and LucasArts today revealed that Star Wars: The Force Unleashed is coming to N-Gage, Nokia’s next generation mobile gaming platform in 2008. Star Wars: The Force Unleashed casts players as Darth Vader’s ‘Secret Apprentice’ and promises to unveil new revelations about the Star Wars galaxy. The game’s expansive story is set during the largely unexplored era between Star Wars: Episode III Revenge of the Sith and Star Wars: Episode IV A New Hope. The mobile version of Star Wars: The Force Unleashed is in development by THQ’s Finland-based studio, Universomo. Using Cell Weaver technology, the game lets the player harness the Force while assisting Darth Vader in his quest to rid the universe of Jedi – and face decisions that could change the course of their destiny. Star Wars: The Force Unleashed Mobile game provides players with unique community features, including tournaments, score uploads and downloadable content, through N-Gage Arena services. More info can be found at www.n-gage.com