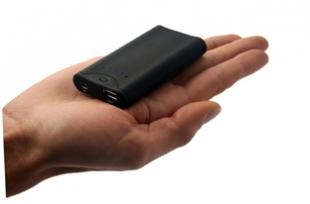 It wasn’t too long ago that I reviewed Proporta’s USB Mobile Device Charger and believe me I was impressed: not only with the sheer simplicity of using this mobile accessory, but also the value of being able to charge your device several times, yet it comes in at about the price of a single battery. I also loved the durable and simple design and I must admit that it came darn close to perfect, but due to the slow recharging of the unit itself and the wobbly hook it got a score just shy of a perfect 10. I also suggested that the next version should be black and that the unit should have a LED system that’s a bit more informative and accurate as to how much juice is left. Little did I know that Proporta was working behind the scenes, putting almost exactly these requested features in a new device. But to my surprise it wasn’t the follow-up to the Mobile Charger, but rather a smaller version in the form of the Mobile Device Charger ‘Micro.’ A charger designed not to replace, but rather be an alternative to its bigger brother, for those that require less power and smaller size. The Micro brings a few enhancements not seen on its bigger sibling. But is this Micro really worth it or are you better of with the bigger model? Let’s have a look at the micro. Key Features
-Charge anywhere; recharge anything – standard USB input and output
-Comes complete with a USB to Mini USB cable as well as a retractable cable with adaptors enabling you to charge and recharge your Nokia, Micro USB powered device, PSP, Samsung, iPod or Sony Ericsson anywhere.
-Measures in at a mere 88 x 50 x 14.5mm.
-Packs an impressive 1700mAh of power (allowing up to 2.5 charges when fully charged.)
-Available in stylish black with LED light power indicator.
-Weighs 50 grams.

The Mobile Device Micro
For such a simple device, Proporta has chosen a rather long name for the little fella and is officially called: the Mobile Device Charger Micro, but we’ll stick to Micro for short. The idea behind the Micro is similar to the bigger version; it’s basically an external rechargeable Lithium-ion battery that is charged via any standard USB port, once charged, you use it to charge your devices while you’re on the go. If you thought the Mobile Device Charger was small, you haven’t seen the Micro yet. Looking at the Micro’s product shots on the Proporta site gave me the impression of the Micro not being much smaller than the Mobile Charger when in fact it is. It wasn’t until I actually held it in my hand did I notice how small it was, measuring just: 88 x 50 x 14.5mm and weighing a mere 50 grams. As expected, with reduced size comes a reduction in how much juice the unit can store, coming in at 1700mAh of power. Exactly half of what the Mobile Charger offered. Instead of offering different versions of the Micro, something they did with Mobile Charger, they are offering the Micro in just one package. But instead they allow you to add the features you want like the Car Power Supply with USB Socket or AC Travel Charger with USB Socket kit. The basic package however has, well, the basics covered and includes a USB to Mini USB cable, and a retractable cable with interchangeable connector heads enabling you to charge and recharge your Nokia, Micro USB powered device, PSP, Samsung, iPod and Sony Ericsson. The Micro will set you back around $44.95, same price as the larger model. The larger Mobile charger that includes the Car and World AC Power that they’re selling for $58.95 seems to be the better value among all of their products. Personally I think offering the Micro for the same price as the larger model makes it a bit overpriced. If they managed to include the Micro with the Car and World AC Power for the same $44.95 would make it a good value.

Design
The Micro shies away from the IPod-ish white found on the original Mobile Charger and goes for an all-black look. This something I was asking for when reviewing the larger charger. It’s amazing how much of a difference a color change can bring and this small change has made a huge difference, making the unit look sexy and sophisticated. Is it even legal to call an external battery sexy? And instead of using a glossy plastic material they chose a rubbery material that I consider a big improvement over the slippery finish and provides a surprising amount of grip. While using the larger Proporta during my travels I found myself with bags and luggage to carry around and having to juggle my mobile devices and the larger Proporta. Due to the slippery nature of its external casing it increased the chances of dropping the unit. The rubbery material is not only grippy, but looks good, will hiding dirt. The material is also just pleasant to hold in the hand. I think Proporta hit the bull’s-eye by choosing this material and definitely should use the same coating for the larger Proporta.

The unit is pretty simple overall with just the charge button and 5 blue LED on the front. While the larger Proporta could only tell you if the unit was full empty or not, the Micro now uses a much more informative 5 LED system that tell you the status of the amount of power left. These LED lights are extremely bright and look amazing set on the black coating of the device. With these bright LED I’m willing to bet that in case your stranded on a deserted island with the Micro these lights can be used as a signaling device :)There’s the usual sticker with product name and specs on the back and a USB-out and miniUSB-in ports on the bottom of the unit. The only other feature on the Micro is the new way to hook the unit to a strap. Because it’s integrated into the body it’s another improvement over the wobbly hook found on the Mobile Charger.

Daily usage
Simplicity defines the unit’s design and just like the bigger brother I found it’s also the word I would use to describe using the Mobile Charger. The packages comes with a retractable power cable that on one end has a standard USB connector and on the other side it allows you to fit inter-changeable connector heads to fit the device being charged. All you need to do is connect the USB end to the Mobile Charger’s ‘OUT-port’, connect the other hand to the device that needs to be charged and press the button on the charger and the device starts to charge. If you have a device that can be charged via USB, that can also be done. When the Mobile Charger had enough juice, the LED will light up green and if it was running low it will light up red, indicating that a recharge is necessary. The Micro used the 5 LEDs that all light up blue when fully charged and gradually turns each LED off as the power drains. When it reaches the final LED it will start to blink this final LED indicating that a recharge is need. When your gadget is fully charged you simply disconnect it and you’re done. The entire process of charging is effortless and is similar to just connecting your devices to an AC adapter. The only difference is that you don’t have to be to a fixed power source. The Micro also lacks any form of a power switch and will simply turn off by itself in about 1 minute after you’ve disconnected your device.

The same complaint I had with the Mobile Charger applies to the Micro: slow recharging of the unit. These requires a few hours to recharge. My Nokia N95 8GB with the 1200mAH battery takes a few minutes to recharge.

Conclusion
Design-wise the Micro is a bit better than the Mobile Charger: more grip, sexy looking black color, a much more informative 5 LED system and solid hook. It’s also smaller, but with a reduction in size you give up half of the power. But the basic idea behind Micro remains the same so choosing the one or the other depends on what type of devices you’re going to be using. Products with a larger battery will definitely benefit from the larger capacity. As Proporta constantly tweaks these Mobile Chargers it becomes increasingly difficult to find a flaw. The only one I can see right now is the slow recharging of the unit itself. They should also work on the value and include the Car and World AC Power. Other than that Micro is another must have from Proporta. If Proporta manages to make a new version of the larger Mobile Charger with the black rubbery material, improved hook and 5 LED lights they would have an unbeatable offering in the mobile charging market. The Micro gets a 9 out of 10.