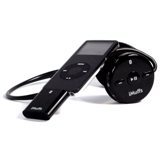 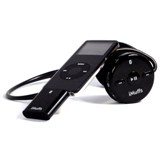 Bluetooth as we currently know it, has carved a very important spot in the mobile world; some would even call it essential. Its main goal has remained true over the years: world domination by replacing those old-fashioned wires. This of course would mean replacing every type cable imaginable, through which data is passed, including audio, using the Advanced Audio Distribution Profile (A2DP) as defined by the Bluetooth SIG. Using the very same A2DP profile, Wi-Gear has developed a sleek, ergonomically-designed set of wireless headphones for the IPod and Bluetooth enabled phones called the iMuffs. ‘iMuffs represent the massive convergence of two great technologies: the iPod and Bluetooth cell phone technology,’ said Mark Pundsack, Founder and CEO of Wi-Gear. ‘We saw an opportunity to fill a gap and put the two things together, for a product that provides fantastic sound quality and functionality without all of the hassle of wires.’
The iMuffs use the speedy Bluetooth 2.0 standard and the aforementioned AD2P profile and has a unique feature where when paired with a Bluetooth phone, the iMuffs will automatically pause the iPod and ring in the headphones, allowing the user to talk through the integrated microphone. Based on this we can also conclude that the Bluetooth Headset profile (HSP) also seems to be present in the iMuffs. The A2DP and HSP profiles also allow it to the used as a standard (but wireless) in a notebook or desktop environment and these acn be charged through any computer’s USB port, or with the included travel charger.
Wi-Gear has informed us that there will be one version of the iMuffs: the MB210, that comes both in black or white. Adding a silver version would be nice though! The unit will sell for $179.99 and includes the iMuffs iPod Adapter MA110 (Bluetooth adapter) which can be purchased separately for about $59.99. Another interesting observation is however that there’s no way of getting the the MB210 without the Bluetooth iPod Adapter. This is especially true for users that use their mobile phones as their main MP3-player, which in that case would make the included adapter unnecessary. All iMuffs products are available at www.wi-gear.com.