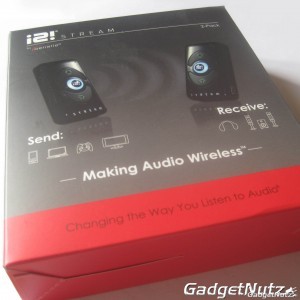 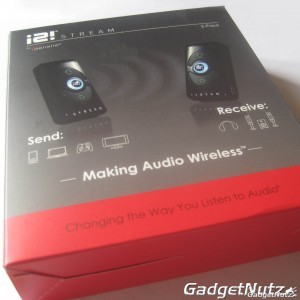 The i2i Stream came out last year, but has been repackaged, revamped and since we didn’t cover it upon its first release, what better than to do so now. Originally, the i2i Stream was sold as being a solution for teenagers wanting to share their iPod music with each other, but it was a little expensive for that purpose. Now the packaging shows multiple uses – video games, TV, computers and yes, still the iPod.

Working
The i2i Stream is a pair of identical little black boxes, one that acts as a transmitter, the other as receiver and the signal is broadcast on the 2.4 GHz band. It has an effective range of somewhere near 20′ in my house, after that the signal quality and volume drop off rapidly. In order to set it up, you connect the provided cables to one end of the broadcast unit to the headphone socket on your output device – be it an amp, your television set or an iPod. You switch the unit on with the small button in the upper right corner that also doubles as a volume slider, and you press the button in the centre of the unit to choose a channel – the button cycles between seven different colours to indicate the channel chosen. Next, you take the receiving unit and plug your headphones in. The headphone socket and input socket are at either end of the i2i stream unit, but the input socket is a 2.5 mm jack socket, whereas the headphones socket is the standard 3.5 mm. Now that you have both units ready, hit the transmit button on the sending unit and you’ll see that the channel light in the centre starts blinking. If the receiving unit is already on the same channel it should start receiving the signal from your output device.

Multiple broadcasts, multiple receivers
So far so good, but the interesting thing about the i2i Stream is the ability to broadcast to more than one receiving unit – let’s take as an example some serious multiplayer action on the console in the living room while dad is trying to get on with some work. We have one output i2i stream attached to the console (or TV, or amp, or wherever the sound is blaring from) and each player has a set of headphones with a receiving i2i Stream. They can now play with the volume up as loud as they want and dad just has to cope with the exclamations of number one son getting fragged for the umpteenth time. Best of all, let’s say dad would like to drown out said exclamations by listening to some nice Chopin, but can’t really have the stereo on for fear of irritating the adrenalinised offspring. He can hook an i2i Stream to the family hifi and choose a different channel from the pixelised mayhem and listen to his music with no crossover. In the tests I did I had up to three different sound sources in a limited space and the i2i Stream worked flawlessly. Listeners can jump channels on the fly too, meaning if that Chopin gets a little tired, you can always listen in to the guns blasting on the video game.

Issues
The i2i Stream is a neat little thing, but I have a few issues with it. While the build quality on the whole is good, the combined power/volume slider button is a little rattly, which reduces the apparent overall solidity of each unit. The battery life in my tests doesn’t really go to the claimed seven hours, it’s more like five and a half, plus the individual units can do nothing while they are being charged so if you only buy one pair, the whole thing is out of action while you wait the hours needed to recharge an emptied battery. Perhaps the product would be more appealing if four units were included in the box without merely doubling the cost of the system? Talking of cost, the i2i Stream is a pretty expensive way of “remoting” your listening experience, which limits its appeal somewhat. However, if you have the cash I’d definitely recommend it – the sound quality is great and the signal is rock-solid under normal listening conditions.