Apple’s new iPad and why it’s a qualified FAIL…

After literally months of speculation, hopes, and hype, Apple made the eagerly-awaited announcement today of the upcoming “iPad” tablet computer.

Rather than “live blog” the event, I thought I’d let it sink in, look at the device itself (http://www.apple.com/ipad), do a little research and come to a little calmer opinion than a lot of people I’ve read today suffering from knee-jerk reactions.

Why calmer?  Simply and unabashedly stated, I’m an Apple fanboy.

As such, like all of us fanboys out there waiting on the “miracle tablet” to save us from our droll existence, I proudly proclaimed that I’ve already been in line for day one of its release months before it was even acknowledged.

Now that the announcement has been made, I’m not quite so sure, and here’s why: 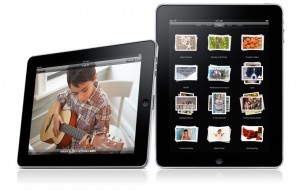 Why I’m on the fence…

As I said, I expected the iPad to be a game changer.  Instead what it looks like we got is a new iPod Touch on steroids.

Maybe THAT’s why they chose the “iPad” moniker which is easily confused with its baby brother, the “iPod” over other more appropriate names like “iSlate” or even “iTab”, but I digress.

Unlike the loads of pre-announcement speculation, it doesn’t run Mac OS X (or even a lite version), so you can’t use it for things like programming or anything that really requires real work level abilities.

That being said, I *love* my iPhone.  As such, I think I would actually get a bit of use out of a 10? version of the same type features and apps (especially games).  In the end however, what keeps it from being a slam dunk game changing home run for me is the fact that it doesn’t have even a hint of a CAMERA on it.

Whether or not you like Apple, or their products, the simple addition of a web cam / camera on the new tablet could have changed the world.  Imagine for a moment that they DID include one (*and just to be clear, they did not*).

To get an idea of why the lack of a camera on the iPad pisses me off SO much, simply imagine the following scenarios;

Before you say it, yes.  you’re absolutely right.  Each of these things could be easily accomplished by any of the MacBooks (though MacBooks don’t have access to the App store) already, so why not just buy a Macbook, shut up, and be happy?

Because.. Dammit…  For the first time, there will be a tablet computer on the market that could have made the difference, and it damned sure LOOKED like one of those “Star Trek tablets” we’ve been promised for 50 years now (thanks Gene Roddenberry!).

Instead, what we get is a device that might be interesting for what amounts to a 10? iPod Touch.  It might not be.

It might be “yet another e-reader” with the App store built in, but sadly, due to the one, single stupid oversight in leaving out a camera, it will NEVER reach its full potential.

As a self proclaimed fanboy, I find myself disappointed and will probably wait for “iPad 2G”.