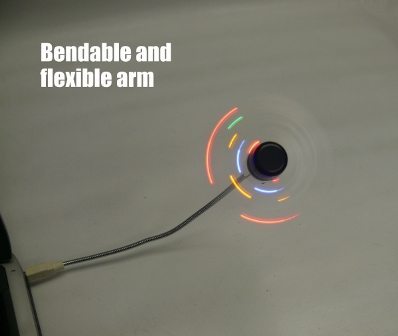 Are you a FAN of Gadgets?

The good people over at EFO have created a nice, LED lighted, USB-powered 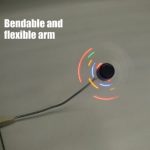 fan that brings a whole new meaning to the phrase; “cool gadget.” Don’t have your laptop around to power it? Then, run and snatch up the USB emergency charger (also available from EFO) to do the job. We got the skinny on EFO’s chrome plated, goose necked, multi-colored LED fan; which, seems to be as charming of gadget as it is an economical toy. Not to let the utilitarian in us down, they also provided that “Emergency Charger” for review, and this too is a nice gadget for less than ten of your hard-earned slices of bread.

Barely a week after receiving these items a summer storm, like George Foreman, knocked out the power, so we know just how cool these gadgets really are. I doubt our friends over at http://efo.buy-lowest.com could have

dialed up a thunderstorm, but if so they picked the right time. It’s

May in the southern United States, so that means two things. One – it is already hot. Two – the humidity is stifling. When a spring shower came through, killing the power as it went, the fan got used. The Emergency Power Source was also used (mostly for the fan, but we plugged it into the phone too). One good strike of lightning and the cute toy became a much needed facilitator of relief.

Going back to the first day of opening the package, the first thing that struck me was the construction of the unit. One expects an inexpensive little toy to be built like a dollar store special. This little fan, however, seemed to have fairly solid construction. The metal goose-neck adds some weight to the unit and adds to the feeling that the fan is a decent unit. The motor housing is encased in chromed plastic, but doesn’t take away from the overall feel of the unit.  The fan blades are a different, but still pleasing, story. They are soft, which is a good thing considering that there is no protective shielding between the blades and the user’s extremities.

The LED’s are tucked away inside of the rubbery fan-blades, and light up in a concerto of patterns when the fan runs.  Similarly, the battery back up seemed solid enough, sans the metallic part. It has it’s own feel, more akin to the rubber-like plastic used to make combs. The LED flashlight addition, however, does little more than prove that the double “A” batteries are working.  Not that much light would be needed to find where to put one’s key to open a door.

The initial thought is that this thing, being powered by only double “A” batteries, wouldn’t run very long. That perception was incorrect, as the battery powered the USB fan for over four hours. It is ver nice that it powers that fan, but it does show a weakness of the charger—it will only work for those devices that can be powered by a USB connector. This does eliminate a few phones still on the market, including some new models. Just something to keep in mind when deciding on whether the Emergency Charger is for you.

Keep in mind that these little gadgets are not meant to replace the car, become space travel, or even to invent sliced bread. They are, however, quite handy when the power is off. A battery powered fan is oh so nice when the power is out. When supplied with an power adapter in a car, the fan would be great there too.  The power supply is also very handy, since it can be easy to find “AA Batteries” around the house. The construction is solid, though differently designed, in each of the two items provided. Nice little gadgets here, and they are priced “little” as well.