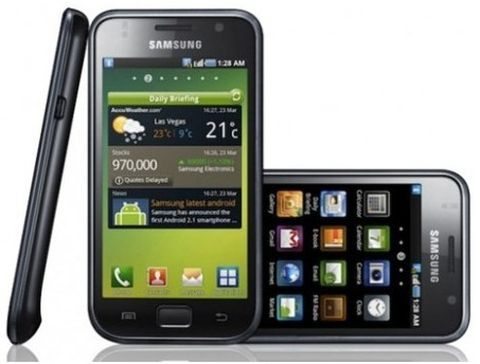 · Advanced touch screen gestures capabilities, including multi-touch pinch to zoom, double tap to zoom and horizontal swiping, which provides easier and quicker access to many applications, including location-based services, Web browsing and digital photos or videos

· Six-axis sensor that works with the smartphone’s accelerometer to provide a smooth, fluid gaming experience when the user is tilting the device up or down or panning the phone to the left or right

· 5.0-megapixel camera/camcorder – Auto-focus and LED flash with HD video recording and playback (720p) capabilities to capture photos and videos for playback on your HD television

· Samsung’s Social Hub – Built around messaging, contacts and calendar sync, which allows users to send and receive information, whether it is e-mail, social network updates or SMS messages

· Feeds & Updates – Displays feeds from multiple SNS sites such as Facebook®, MySpace and Twitter, which also allows users to update their status instantly

· Write and Go – Quickly jot down an idea and later decide on a format, such as SMS/ MMS, e-mail, calendar or memo, to send or post to popular SNS sites such as Facebook, Twitter and MySpace