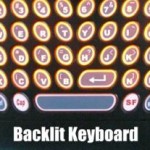 The Unisen Group’s Wireless Handheld PC Keyboard and Mouse Touchpad is a remarkably small device, even if the name is more than long-winded (ED NOTE: it is now the iPazzport).  This gadget is one of those, “why didn’t someone think of this sooner?” type of gadgets.  No, Really.  This little device isn’t going to win any technical achievement awards, but, under the right circumstances, it could very well be indispensable.  The construction is, at best, good; however, it is doubtful that such a device would be used in any industrial environment in the first place.  The feature list for this little device is actually rather substantial, and thus is not missing anything to do it’s job.  Seriously, this is the kind of device that should  have been on sale the day after a Qwerty keyboard was put on a cellular.

The Wireless Handheld PC Keyboard and Mouse Touchpad is not a space shuttle control panel.  It is not the discovery of a black hole in the middle of the sun.  This device is not the next big advancement for processor technology.  It is, however, a great device that puts together several small, but key, innovations into a rather nice peripheral.  Thinking about that PC based media center to hook up to your nice HDTV?  This device could easily marry that concept, by providing all one needs to control a PC from a room away.  This thing is literately a keyboard and mouse shrunk down to the size of a remote control.  In case you are wondering, a Qwerty keyboard and touchpad has the same number of buttons as a Dish Network DVR remote (49, when counting the touchpad as a button), and fewer than a Samsung TV remote (coming in at 54).  The device also doubles as an input device for various gaming consoles (Xbox 360, Playstation 3, and Wii), allowing the gamer to input text for games.  Honestly, this is not going to replace a full keyboard and mouse/trackball for general purpose computing tasks; instead, the myriad of specified uses can help dictate whether a purchase of such a device would be beneficial.  If someone is required to give a presentation utilizing a media PC, then having the full keyboard and mouse in their palm could just be what the doctor ordered.

The device is small, lightweight, and very portable; which, means that it is made of lightweight materials, and can be easily dropped.  The device isn’t necessarily made poorly, but, by it’s very purpose, it would not be a wise item to use in a heavy industrial workplace.  The buttons are more related to those found on an inexpensive universal remote control than those found on cell phones; thus, I would be weary of manhandling the keyboard our mouse buttons.  The touchpad is effective, and is seated well in the device.  The LED’s are placed deep within the plastic housing, and are protected from the world outside.  All in all, it will physically suffice in a home, classroom, or board room environment.  The construction isn’t bad, but it is not going to survive a nuclear winter along side the Energizer Bunny either.

Speaking of batteries, the built in rechargeable battery is a great idea for a wireless device.  Just a few short years ago, we expected to buy batteries for everything.  This device almost demands that we question why we must purchase batteries for our TV remotes.  The device recharges via the supplied USB cable, but still requires the receiver dongle for usage of the device.  The device is not Bluetooth, instead is uses 2.4Ghz radio signals for communications.  The Wireless Handheld PC Keyboard and Mouse Touchpad also supports plug-n-play operation.  The auto-standby feature helps to preserve battery life of the device when not in use.  A feature which does not preclude a good old fashioned on/off switch.  The device has all the keys necessary to get the job done, including arrow keys, backspace, and, by using the alt function, the numerical keys.  The final touch is the nice bright amber/red backlight for the keys which is toggled on and off via the “RF” key.  There are just not too many features that could be asked for on top of this device, which also goes by the name “iPazzPort” (though it is not marketed with that name).

All in all, the Wireless Handheld PC Keyboard and Mouse Touchpad manages to be a very useful little gadget that brings together several other small technologies into one device.  It isn’t the most technical gadget seen here at GadgetNutz, but it is certainly well-liked.  The feature-list is as complete as it should be for such a device, it is constructed well-enough to get the job done, and has the capacity to get that media center past the remote control hump.  Devices like this is why Qwerty was created.

[More Notes:  There are extra flavors involved, including wired USB and bluetooth available.]