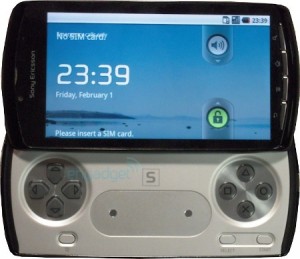 Yes, again.  The Bandito finds it difficult to believe that with all the media outlets available for today’s market that companies such as Sony and Apple find ways to “leak” information to the public.   The Bandito does not like such foolishness.  Apple sues someone in a bar for “finding” the iPhone?  They couldn’t buy that kind of media exposure.  Sony, likewise, will likely not chase Engadget to the ends of the earth over this “leak,” if you can call it that, concerning the new PlayStation Phone.  The Bandito does not want his intelligence insulted.  Yes, the article on Engadget is very interesting.   Yes, playing an old favorite PS-One game on the trusty cell phone would make the bus ride easier in the afternoons.  This, however, is no “leak.”

The Bandito read Engadget’s earlier article, full of speculation, no wait–IDOLation.  The Bandito sees the pictures.   You see the pictures.  We ALL see the pictures.  The Bandito notes that the pictures are better than nice, they are professional.  Thus, this “leak” is a well timed, well organized, PR stunt.  Or, as the Bandito prefers to call it, stirring the pot.  This is a new Millennium, Sony Execs.  Microsoft, Nintendo, third party software developers, and everyone else advertises with nice big flash-based backgrounds on commonly used websites, GameFaqs, IGN, Zam, etc.  The Bandito says it is time to stop these shenanigans, get with the program, and advertise properly.

Sure, The Bandito is late to the “ooh look at the pretty PlayStation Phone picture party,”  but really? Really?  About the only way the “leak” would be better is if a Sony employee left one at a bar somewhere…  Too late, Apple pulled that one guys.  The Bandito guesses that this “leak” won’t be getting on CNN, what a shame.  The Bandito was so disgusted by this supposed “leak” that he forgot to throw in his two cents over the content of the previously mentioned “leak.”

The phone.. Game system… Leak…  Oh, excuse The Bandito..  The PS-Phone ships with a respectable 1Ghz processor, 1/2GB of ram, and support for MicroSD cards.  The Bandito supposes that should be adequate; however, the proof is in the pudding.  Will third party developers jump on board?  Will the content be affordable?  These are all questions that The Bandito cannot answer until the unit is releaked, erm, released.  The release date is likely to be in 2011, if that, since the Engadget guys seem to think it will ship utilizing Android 3.0.  Stay tuned for the next leak from Sony, due in..  Ah hell, The Bandito is tired of beating that drum.