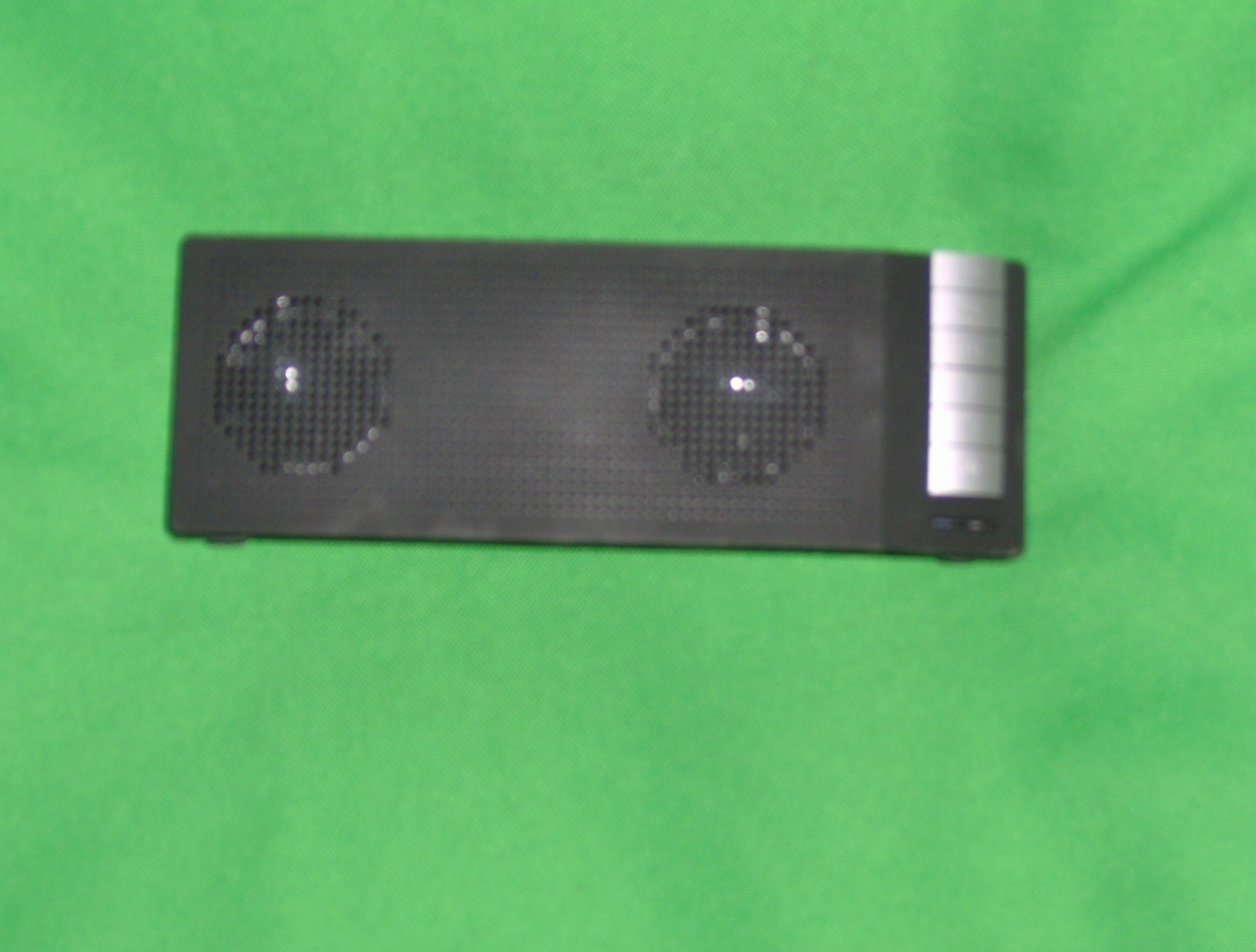 I’ve had an opportunity to use the Phoenix Series BTS001 BeatRoute Bluetooth stereo speakers for several weeks now, and I think I’m ready to comment on it.

I spoke a couple of times with Octave Systems’ (http://www.BeatRoute.com) president, Roy Worthington, and he was the epitome of the helpful support tech. Among other things, he informed me that the target audiences were music players such as the iPod, smartphones such as the iPhone, and portable computers like the iPad.

The unit consists of a speaker unit with integral Bluetooth transceiver and a microphone, an AC adapter, and a mini-phone plug (3.5mm) cable for hard-wired connections. It will also run on six AA batteries for that portability we’ve come to treasure in our tools and toys.

Designed to remotely control your player or phone, it has buttons to pause/resume play, next song/previous song, volume control, and a multi-function power button. Paired with your phone, it can also function as a speaker phone accessory, where the buttons take on new functions. The manual covers this in more detail.

If you have an audio device that uses the A2DP (Advanced Audio Distribution Profile) protocol and a phone that uses the HFP (Hands Free Profile) protocol, you can pair both of them at the same time. In that case, the speakers automatically mute the audio and go into speaker phone mode for incoming calls. (If the phone supports simultaneous use of both A2DP and HFP, it may not be possible to pair with two devices at the same time.)

Pairing the speakers with a single Bluetooth is pretty straight forward: with the speakers off, press and hold the power button until the LED flashes red and blue. With your Bluetooth device within a one meter (three point three feet) range, set it to search for a device to pair with. Once the device finds the BTS001 speakers, send the speakers’ PIN, using the instructions of the device. Once paired, the speakers will automatically try to pair up with the last device they were paired with every time they are turned on.

So, how does it sound? As usual, that’s dependent on the quality of the audio input. When I first paired it with my inexpensive phone, the quality was comparable to that of a portable AM radio and I was frankly underwhelmed. Later, I paired it with a friend’s iPhone, and the quality was better. Because the speakers are so close to each other, stereo separation is highly dependent on how far you are from the unit. I’d guess the stereo “sweet spot” is about two feet away.

Having access to a video projector that has an inadequate sound system, I plugged the speaker unit directly into my laptop and watched a video. The sound quality was acceptable, but don’t expect room-filling sound from a battery-powered unit.

My experience with the unit as a speaker phone was mixed. The sound quality on the speakers’ side was very good, of course. But the sound transmitted to the caller varied. One time, there was a buzzing like interference that made the voice unintelligible. Another time, it was reasonably clear, with that characteristic “hollow” sound of a speaker phone. I don’t know how dependent the clarity was on the location; it’s possible I was experiencing interference from the fluorescent lights.

Pros: if you want to share sound without passing around the ear buds or the headphones, this will work fine. The ability to automatically switch to a speaker phone while listening is a handy bonus, but the focus here is on using it as speakers, not a phone. It is highly portable, which cannot be said about most external sound systems you might plug your player into.

Cons: poor stereo separation and lower sound quality than I’d hope for with my music player. Perhaps I’m spoiled by hearing better, less portable systems? The 3.5mm cable also strikes me as fragile-looking. It says it can be used in your car, but there is no way of securing it to your dashboard.