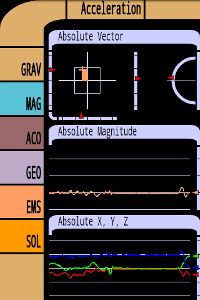 Turn your communicator into a tricorder – with an Android app!

I think we can safely assume that everyone who is a gadget nut (and why else are you here?) knows what a tricorder is. But we also know that assumptions are the mothers of mistakes, so I’ll digress a moment.

When Gene Roddenberry first envisioned the tricorder for Star Trek some 45 years ago, it was little more than a camcorder. Intended to 1) record the captain’s logs in an audio-visual format and 2) simultaneously give the pretty yeoman something to do and an excuse for being in the landing party in the first place, it quickly gained enhancements. Need a quick plot complication, or a way of resolving a plot complication? Give the tricorder a new sensor and let it do the work.

With all of the new and not always explainable sensors phones gained, maybe the tricorder COULD be made. And it must have been that sort of thought that springboarded the tricorder app into life.

Written by a person working under the nom de programme of Moonblink, the tricorder app (found here: http://code.google.com/p/moonblink/wiki/Tricorder) doesn’t give you a pretty wallpaper, it gives results. Making use of every phone sensor he could reliably access, he packaged it in a Star Trek format and a tricorder was born. (Temperature, light, and proximity data proved to be unreliable or difficult to access and were dropped from later versions.)

Like what? Like gravity (which is really acceleration). Like magnetic fields. Like audio analysis. Electro-magnetic fields (currently confined to your wireless provider’s signal and Wi-Fi signals). Geographic information (compass, GPS, and wireless network position data). By logging onto an astronomical website for its data, it can also report on recent solar activity, including a reasonably current image of the sun.

How accurate is it? As accurate as your onboard sensors, which probably varies. But the gravity data are expressed in meters per second squared (Earth’s gravitational field is nine meters per second squared) and the magnetic data are expressed in microTeslas. Accoustic data are in decibels, and there’s a spectrum analyzer showing you how the sound energy is distributed from zero to eleven kilohertz. There’s also a pretty hypnotic oscilloscopic waveform display for accoustic analysis. (Some of us are not only in love with the sound of our own voices, we like the sight, too.) So we’re not talking about made-up meaningless units of measure here.

You can get signal strength information on any WiFi hotspots around you, as well as your wireless provider, and in a subset of the geographic display, the strength of the received GPS signals. (That display alternates with the default compass.)

The magnetic and gravitic displays not only show numeric data, they also give graphic displays of both vector and intensity. Additionally, they can be used in either absolute or relative modes. (If you’re looking for small changes in either acceleration or magnetic field strength, the relative modes make that much easier by essentially zeroing out the ambient readings and looking only at the changes.)

The app is very easy to use, and there’s more information in the help files built-in than there is on the web site where you can download it! (I find the vector displays much easier to interpret, now, and it’s nice to know the numbers have an actual meaning.)

How useful is it? Well, that’s another area where your mileage may vary. I certainly wouldn’t use it to avoid drilling through wires in my walls, nor trying to determine exactly when to pull the ripcord on my parachute based on acceleration. And there’s currently no way of recording the data, so you better hope that magnetic anomaly you spotted earlier recurs when you want to show someone else later.

But it is entertaining in its own right, and you might be able to make up some games to use it in. (See who can make the highest- or lowest-pitched sound, or see who can find the box with the magnet in it.) And it would certainly be easier to whip out your phone to check on WiFi availability in your area than to first set up your laptop and have it look for networks. Unable to get GPS data? You can check to see what your reception is like; maybe you just need to get out from under those trees to see a signal.

As a way of demonstrating that a tricorder is possible and maybe even practical, this little app is a very inexpensive experiment. (Free is good, right?) As a way of building up your geek cred, it just might be priceless. And the next time the TSA insists on scanning you, you can scan them back!

Uh, but don’t them I said it was okay, right?