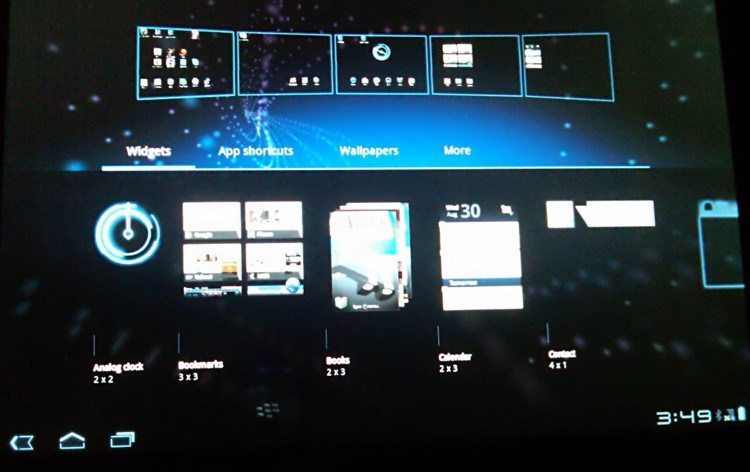 I’ve shown the XOOM to family, friends and even my computer group and it has gone over like gangbusters. I like the look of it because it reminds me of features found in my Ubuntu system. Anyone who is familiar with Linux and compiz knows what the Expo feature looks like. It’s a great way to get an overview of your WorkSpaces. I happen to have my Ubuntu setup to see One Big Wall when I hit a key combination so I can see which programs are running on each of the four workspaces I have. The XOOM can access a similar look. To get this view just touch an empty part of the screen gently. I know that sounds a bit odd, but the touch screen responds to very subtle gestures. In this case you just Place your fingertip on the screen – no moving it – and it will zoom out to show all the workspaces. The XOOM workspaces are all lined up at the top of the screen. I can see all the icons and programs on each workspace and can tap whichever one I want to go to immediately. Or I can scroll through my list of features and list of APPS in categories on the bottom half of the screen.

But I like it because it’s small, light, and and there’s billions of Apps available……It’s not perfect, but there’s great potential here.

BOOKS
It’s not a surprise that I can also access these books under my Google library. I find the XOOM easy to read from and there’s a nice list of books to available. 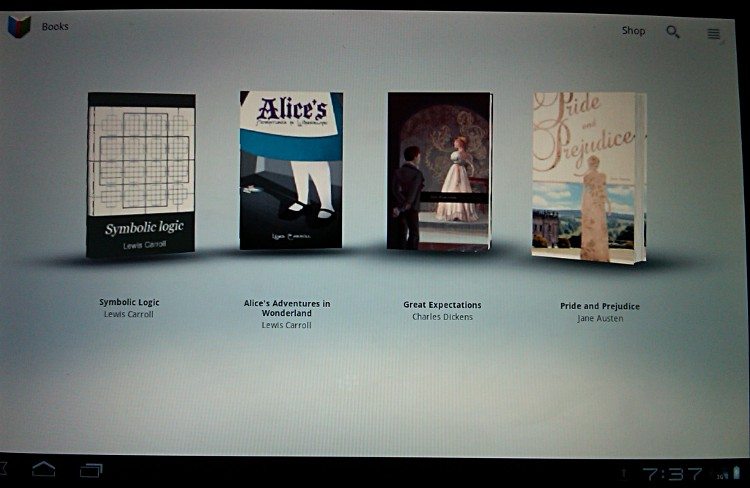 I love how I can flick my finger to turn the virtual page. I realize this is probably old news to some people, but I guess I never tire of these “tricks”. And I like that it bookmarks my last page read. 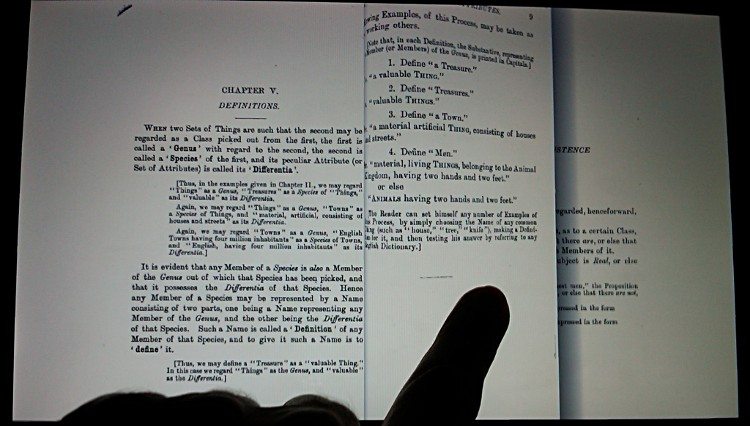 I’m one of these people that just loves the feel of paper books in my hands, but talking about the XOOM to my mother, who is a retired teacher, she immediately sees the benefit of having a small, light device that can hold a very large number of reading material. It’s not a substitute for books in all situations, just a really useful alternative when you would rather not carry 50 pounds worth of text books. Can people make notes related to certain pages? I’m sure there’s an App for that. har har

MOVIE
I’m not very happy with this included program. The user can not add tracks. Just one Track where you add your movies and still images one after the other. You then add effects to sections and transitions between still images or videos. It’s rather simple but it’s fast and works. You can also make a video shorter and “speeded” up. Tap on the Still Image or Video you wish to alter and a green graphic with arrows shows up. Pull to the right or left of the arrows and you will see the element shrink or lengthen. The length is not unlimited. You are limited in the style of text you can add. And it only can be attached to a particular Still or Video. No overlapping. And when I added an audio tract I didn’t see an easy way to fade out the song at the end. It’s not a professional editing suite by a long shot but it’s not supposed to be. Still, I’m a bit spoilt. I would have hoped for something slightly closer to OpenShot (on Ubuntu). Here’s the video I made on the XOOM:

My XOOM pictures. I have to admit that the camera really CAN take some very nice images. 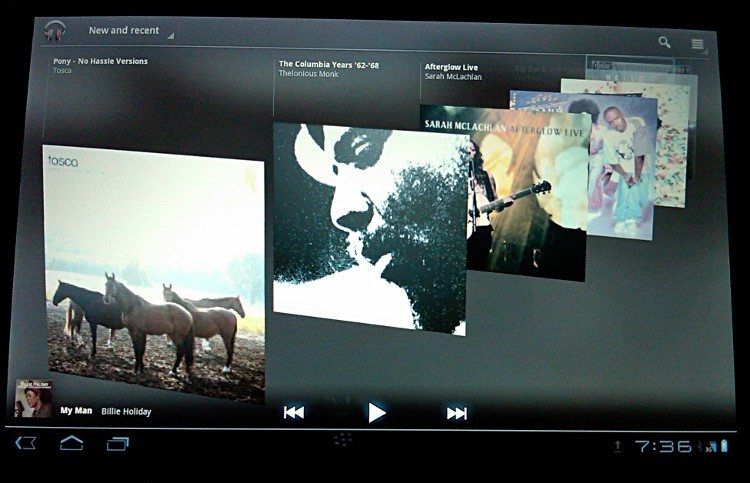 You can add your music files on the XOOM via the Windows7 file manager. Using Linux you can upload music files via Bluetooth. 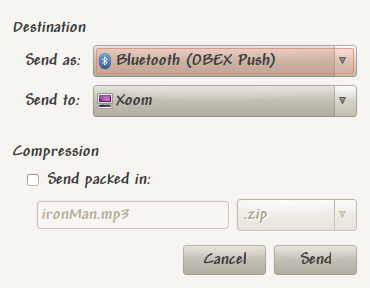 However, the file automatically gets saved to a folder called “BlueTooth”. So you need a file manager for the XOOM – I found several and just picked one. I copied the mp3 into the Music folder. And you can create subfolders to hold your music to organize playlists, if you wish. The music files automatically shows up in the Music Player program. If there happens to be an image file next to your Sound file when you copy it to the Music folder that image will be automatically associated with the music. If it has nothing to do with the song this will end up being more humorous than useful. If you happen to have an image that is related to the song than rename it to albumnart.jpg
As with many features on the XOOM there’s always the Help available.
scroll through your list, select, play. Organize your songs into playlists. easy. 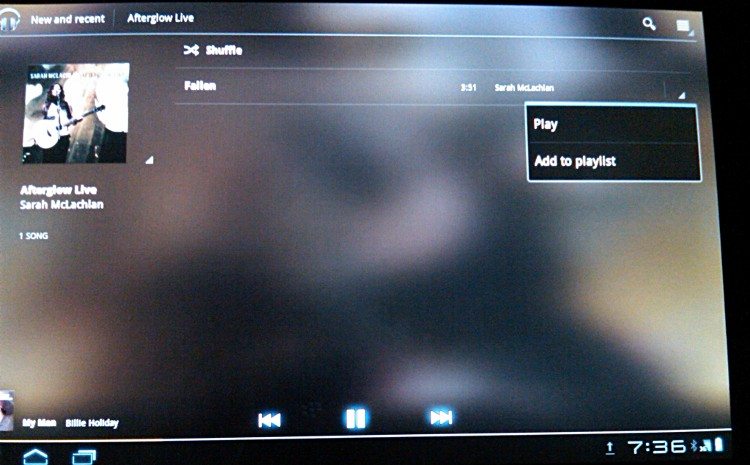 BLUETOOTH HEADSET
i wondered if I could connect my BlueTooth headset to the XOOM to hear music. The headset connects, of course, but it doesn’t connect to the music. Possibly because the headset I have is not stereo (it’s several years old and only mono). My wired Logitech headset plugging into the top works just fine, however.

BLUETOOTH keyboard
Because I have it around I connected my iPazzPort. XOOM found the iPazz quickly and gave a code for me to type into the iPazz. It connected immediately.

The Keyboard on the iPazz works fine. I tried it using the browser to do a Google search. Naturally, the mouse pad feature of the iPazz doesn’t work with the XOOM, which doesn’t surprise me. Obviously, I think I can say with some confidence that other BlueTooth keyboards available probably will work just fine connected to the XOOM.

SKYPE
I downloaded a Skype App from the Android Store and I found while it basically works it does lack some features found on the version used on Computers. I found that it never automatically logged into my Skype account. I Always had to type in my password. When you try to make a call you are notified that you need WiFi turned on. With some experimentation I found the Mic hole in in the “bottom” of the XOOM. It’s next to all the other connects – USB, HDMI, power. Speak in that area for better audio clarity for the person you are talking to. I tried using the camera while I was using Skype and it’s a no go for video calls. Looking over the Android Market there are various programs for making Video calls if you really need to do that:
fring, Tango, Sipdroid VoIP and others.

If you have Google Talk AND the person you are calling also has GTalk, well then you can video conference. But not everyone is hooked up like that. Official word from Skype: “Skype doesn’t currently support video calling on android devices.” No idea when it may become available.

As I pointed out plugging the XOOM into Windows 7 via the USB cable happens immediately if your computer is connected to the Internet – the driver is automatically accessed or installed,

was able to view media files.

So far there is no connection to Linux (my Ubuntu), but that may only be a matter of time. There are people working on it – this guy got Ubuntu 10.10 to access Storage in the XOOM! But a quick look lets me know this is Über-Geek stuff. Even more geeky is actually Running Ubuntu on the XOOM. Wow!

BARCODE SCANNER
One of the programs I saw on a friends’ Droid is this one. There’s also versions for BlackBerry’s that I’ve experimented with so I wanted to see how this App worked on the XOOM. It claims to be able to reads both 1d and 2d BAR CODES. I grabbed a few bar codes I found in my room and held them under the camera lens.

It’s not a great picture but you are supposed to hold the bar code so it shows up Inside a box and with the red line in the center. In some cases I held the bar code upside down and it still was read accurately. And you can use both cameras – front facing or back. 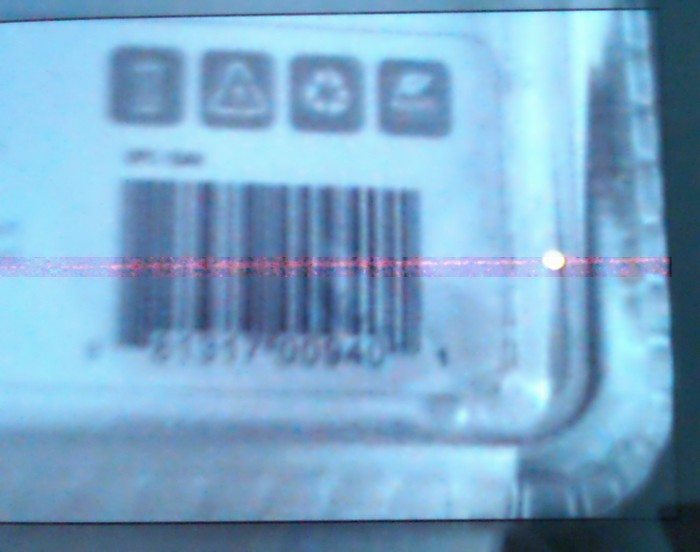 Once identified you can look for where to purchase the item, or access the
upc database. And the history of items you have scanned is always available for further study. I’d say this app is useful.

Google Sky Map
This or something similar is another program I have seen on a friend’s Droid and I knew i just HAD to see it working on the XOOM.

This is one of those programs that uses the GPS feature on the XOOM. You can spend hours rotating the screen – and your body – as you discover the location of stars and planets. I’m in nerd-heaven. really.

I could go on and on…but in summary there’s so much to do with this XOOM – I didn’t even get into verbal searches and commands!. Yes, it still needs some updates but that’s coming. In fact check out Xoom4GLTEUpgrade for more info on updates.
Even so, I was able to fully enjoy my time with this very cool device and I’m sure everyone I showed it to was envious. In a good way!