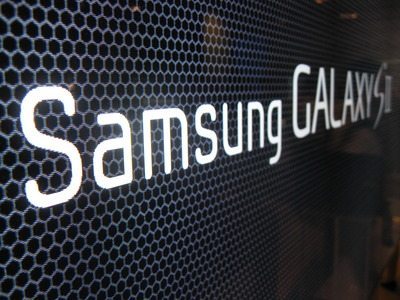 The last time I attended an Event at Samsung at Columbus Circle there was a tornado in NY. This Event (August 30) had been postponed one day because of Hurricane Irene. Are they trying to say their phones Blow the Competition Away? I don’t know, but I’m afraid I may end up having to wear a Hazmat suit at the next Event. Fortunately, yesterday was perfectly beautiful out. The walk from the subway to Columbus Circle passing the southern end of Central Park was refreshing.
Once inside the building one of the floors had larger than life size pictures of people who were part of September 11, including firefighters, the chef from Windows on the World, the mayor…..”Faces of Ground Zero: 10 Years Later” 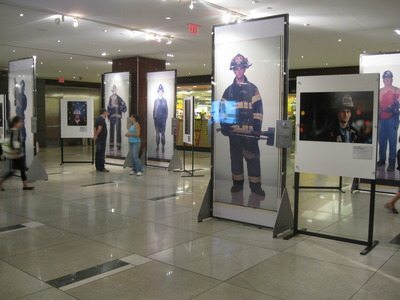 Once inside the Samsung store we waited for the introduction of the Galaxy S™ II. The dance music was filling all the corners of the rooms while the digital reporters sat quietly attending their own devices. Still, the anticipation was palpable. Several Samsung executives, including Todd Penleton (Chief of Marketing) came out to lay out the details. Samsung wants you to know that they are incredibly proud of their Galaxy S™ II. They call it the Smartest Smart phone. Especially as it’s Samsung’s fastest selling smartphone with 5 million consumers in 85 days in Europe and Korea. 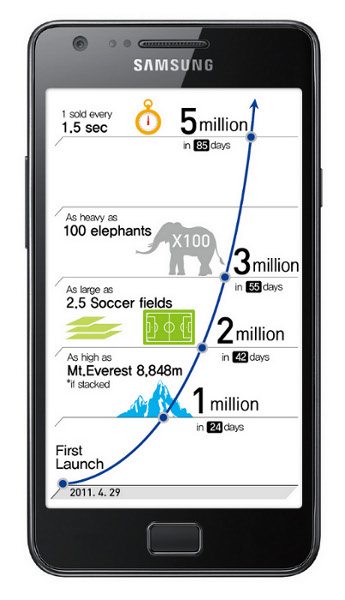 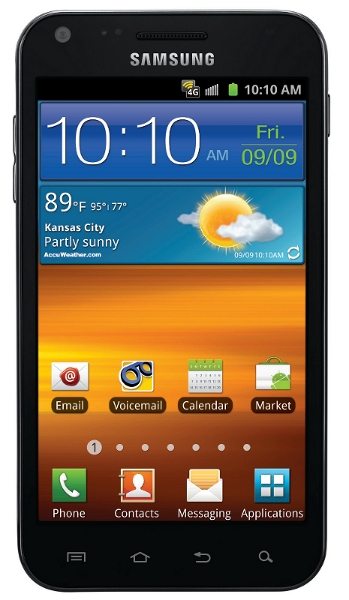 “The unveiling of the Galaxy S II is a landmark achievement for Samsung, our carrier customers and consumers,” said Dale Sohn, president of Samsung Mobile. “Five million Galaxy S II smartphones have been sold around the world and that number increases every day. We believe the cutting-edge design, features and user experience of this innovative device will share the same level of success in the U.S.” 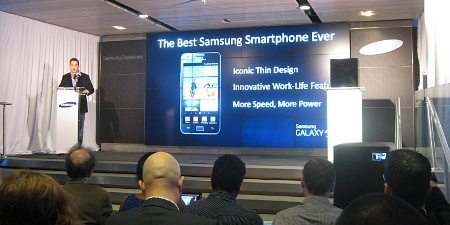 The Galaxy S™ II will be available from AT&T, Sprint and T-Mobile starting this fall. This device is an ultra-thin form factor and brilliant Super AMOLED Plus touch screen display. Recent independent studies showed that Samsung’s Super AMOLED Plus display technology was preferred two to one over any competing display technology in the market today, thanks to touchscreen’s ability to deliver brilliant colors with the most contrast, providing a vivid and crisp viewing experience. 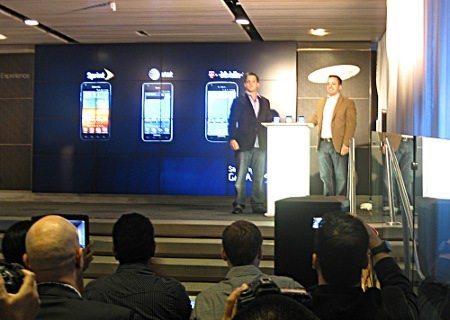 We are promised Dual Core Processors and 4G service, so I am anticipating a VERY fast phone. Samsung just love their Media Hub movie and TV content service. What is interesting to me is playing Media Hub content on a TV through an HDMI cable connected to a Galaxy S II dock or HDTV Smart adapter accessory. Users can share their purchased film or TV content across up to five devices enabled with Media Hub at no additional cost. Buy once, see media in any way you wish. Alternate premium video options include Android Movies, Netflix, and others available to download from Android Market™.

Samsung TouchWiz user interface
When the discussion turned to how they have designed their interface my ears perked up. I knew this was something I had to try out when we were let loose on the devices. On this Android Gingerbread platform they have made the widgets easier to access. The many screens can be scrolled through with one finger touch. They ended the talking part of the event so the crowd could roam around the rest of the room playing with the phones and noshing on interesting foods.

As soon as I could grab the phone I tried out the promised TouchWiz feature. Here is my finger easily finding the ‘sweet spot’ on the UI so I can move from screen one to screen seven instead of just tapping on the ‘circle’ for each screen. It didn’t take me very long to figure it out. I could easily control the speed and stop at the screen I needed. The interface really is quite responsive.
The speed of the Galaxy S II was instantaneous looking around on Google Maps. 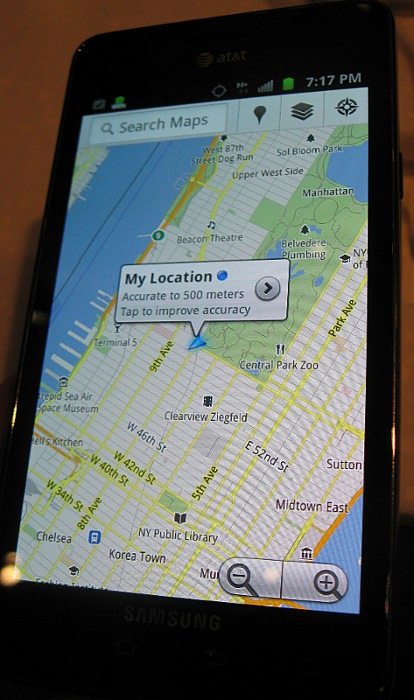 Each of the Galaxy S II devices feature six-axis motion sensing using an accelerometer and gyroscope that support advanced touch screen gestures, including motion to zoom in on images, silence a ringing phone, and even move widgets on the menu screens. 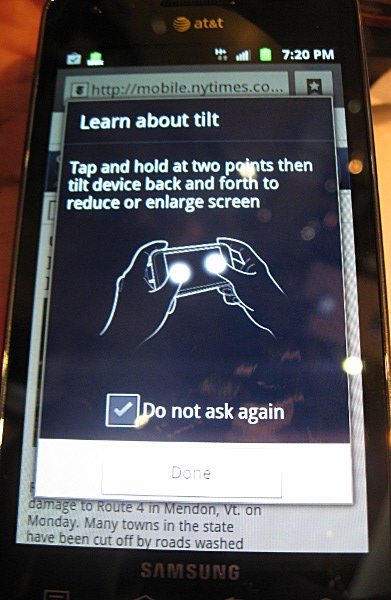 Additional features of the Galaxy S portfolio include:

Finally! A built-in screen grabber! And it’s about time! I was playing around with the camera and it looks darn good. How can you go wrong with 8 megapixels? Orson Wells predicted that someday cameras would basically be a lens that you held up to your eye. As usual, he was right and that time in now. 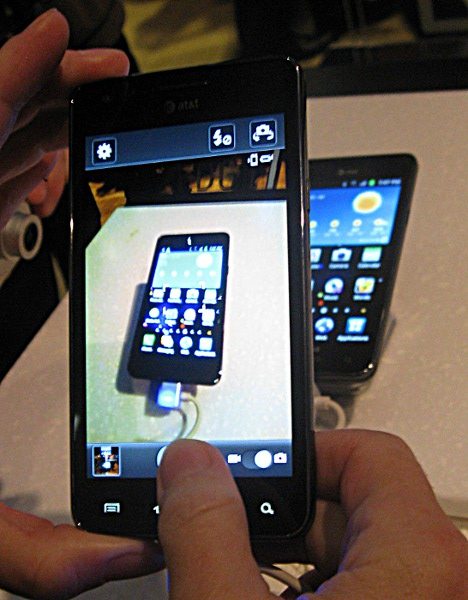 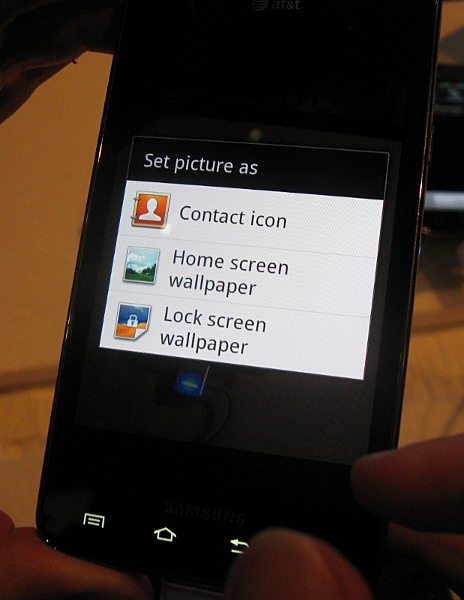 I love the Task Manager. No matter how much memory an Android device may be packed with, if you run every App you have and don’t shut off the ones you are no longer using, eventually you will run out of memory and run down your battery. Plus, it’s very untidy not knowing what is running and not easily being able to shut off programs. At least it’s one of the things that annoy me. With many Android devices I have tested it’s something I have to go In Search of. With the Galaxy S™ II the Task Manager was just Right There. 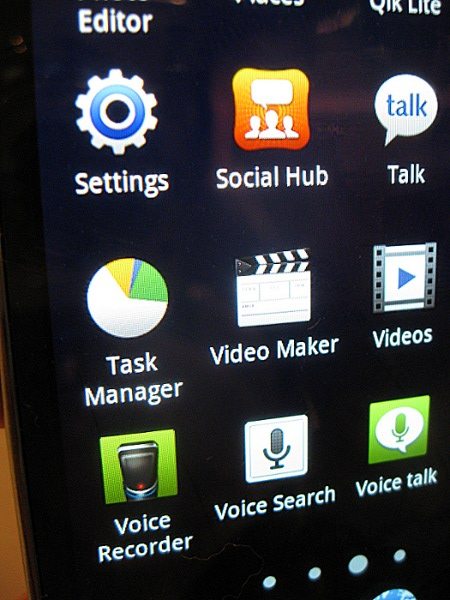 All running tasks are listed and you can “Exit” out of any or all. 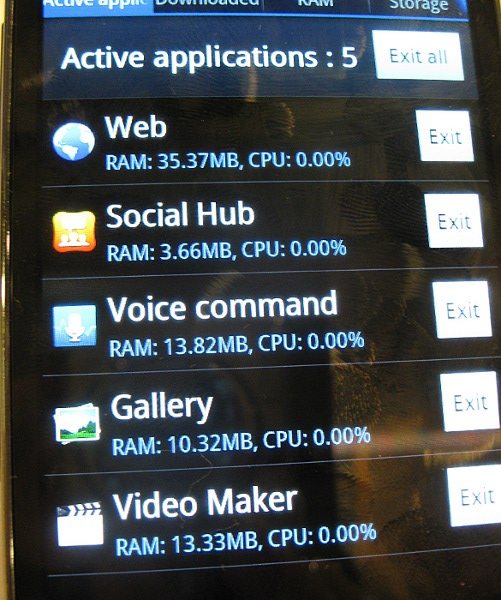 Check out your memory and storage. I love it when my device is nice and tidy. 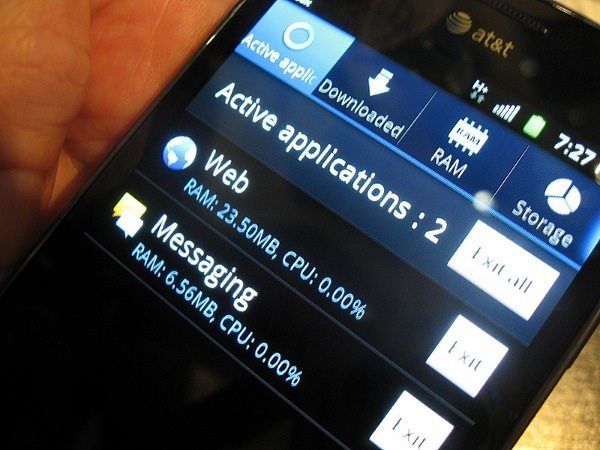 Premium Accessories Portfolio
A host of premium Galaxy S II accessories, including convenient solutions for docking, convergence, and backup battery charging will be available for each smartphone, providing users with an enhanced mobile experience.  A multimedia dock is the perfect smart accessory, allowing users to transform their Galaxy S II into a home stereo by connecting speakers or plugging it into a home entertainment system via the 3.5mm stereo connector. Its ability to orient with the phone while docked makes it easy to view content in portrait and landscape mode, while the auto-launch of its Desk Dock UI makes for easy access to music, video and other applications. 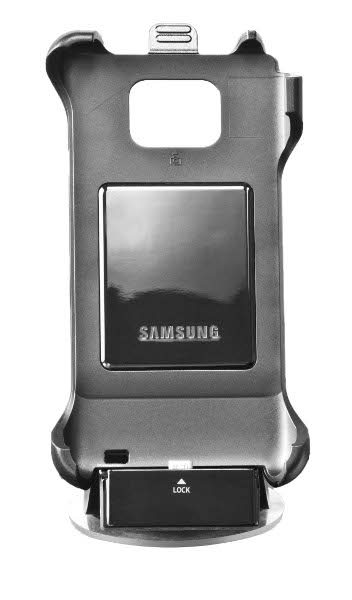 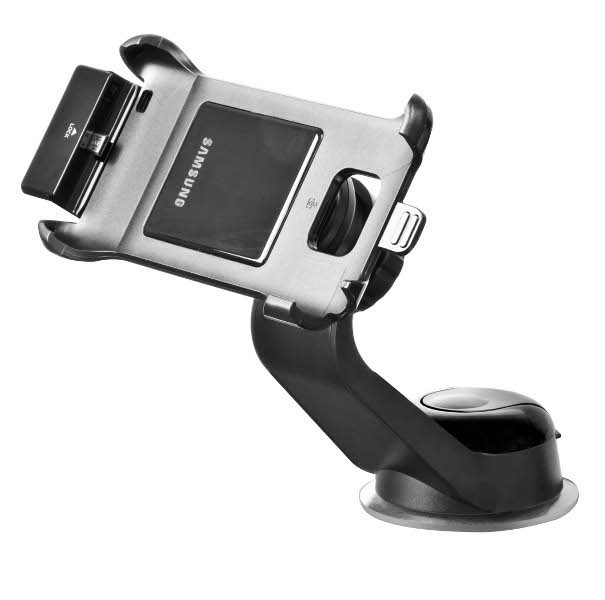 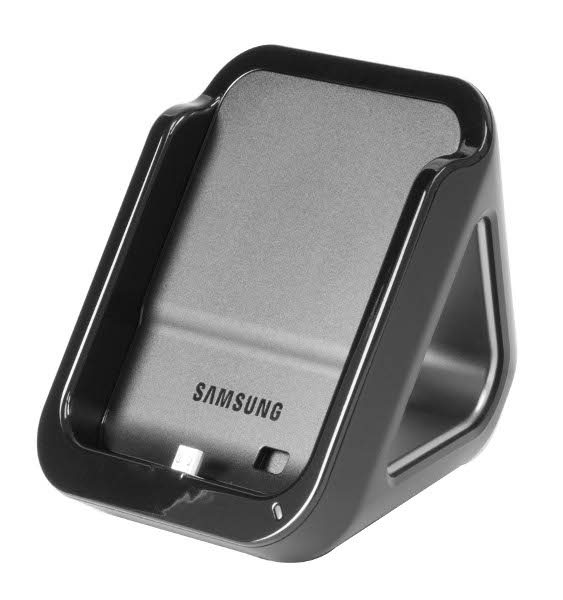 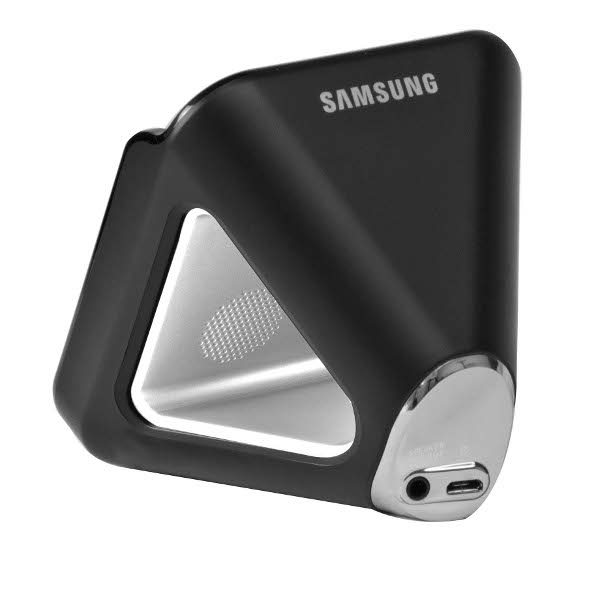 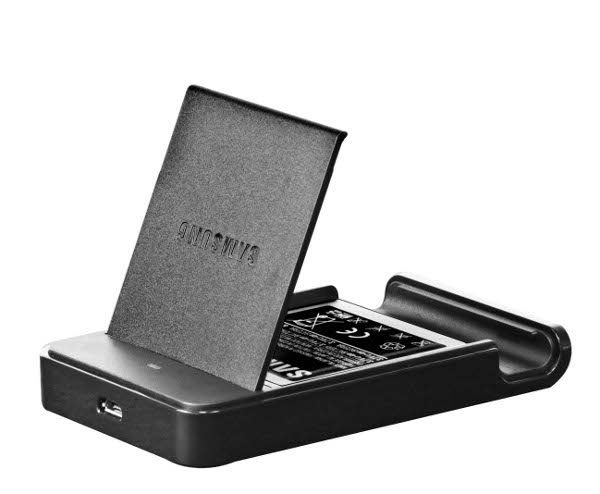 The weather may have threatened to make this Event a washout, but I was happy to have attended. This looks to be a really nice device. They even made a drink and named it after the phone. It was vodka with Triple Sec, cranberry juice, orange juice and maybe something else…..magic. It was refreshing. 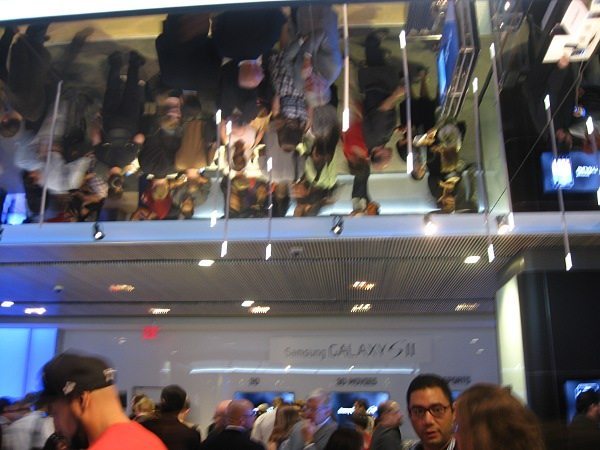 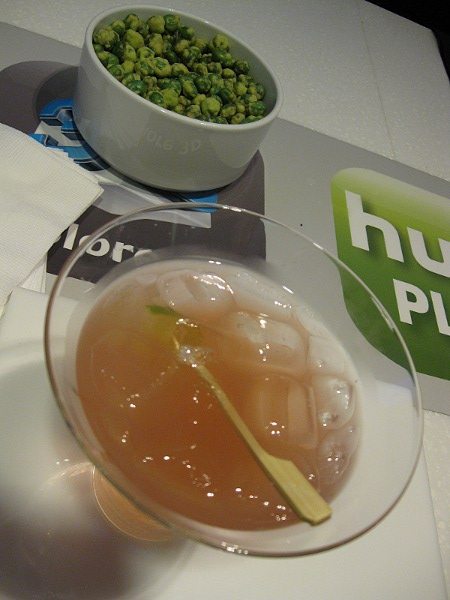