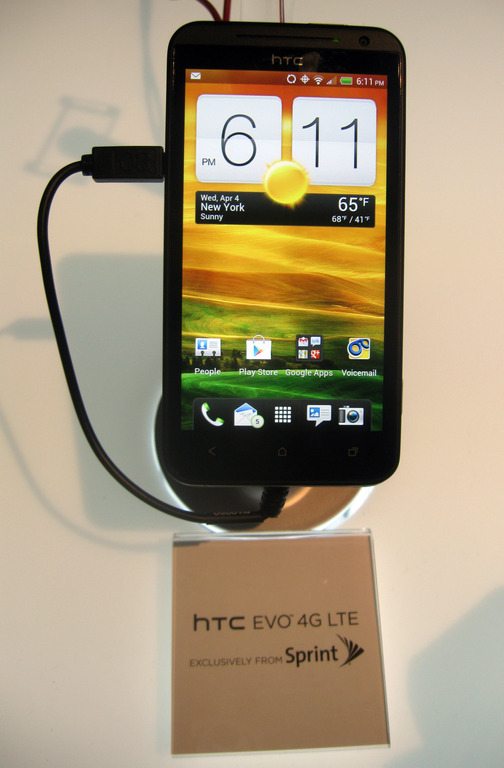 It was a beautiful day in Manhattan when Sprint and HTC unveiled its latest cool, neato phone – the HTC EVO™ 4G LTE – the next generation of EVO since the first one 2 years ago. As we entered the event hall the sounds of Adele playing “Rolling in the Deep” was filling the room. The main screen had moving graphics of pins rolling about. After we all settled in the meaning of this was eventually revealed. Dan Hesse – Sprint’s CEO – walked out and talked about the history of Sprint’s high standards of quality in audio. “Hearing a pin drop” brought back memories of those Sprint commercials. The big innovation with this phone is HD Voice. It introduces new technology in the phone – like dual microphones and decoders – as well as the network. More on this later when I was able to experience this in their sound-proof rooms.

HTC president Jason MacKenzie came out and talked about the design of the phone body. What I noticed when I had a change to see it for myself was a nice thin light phone with a soft aluminum body and red accent around the body. The kickstand is also in this red accent. The screen is a healthy 4.7-inch, 1280-by-720-pixel super LCD. It certainly is quite beautiful.

Camera
Frankly, when I was looking over the camera features it was obvious that there are so many and they are so complex that a brief look will not let me have a good feel for what it can do. The basic stats: 8-megapixel rear-facing camera, 1.3-megapixel front-facing camera with a dedicated camera button.
Fast Autofocus – take continuous shots by holding down the shutter button.
Superfast Capture – takes a picture REALLY fast – like 0.7 seconds. Soon these cameras will just read your mind.
Image Sense – Smart flash which properly judges distance from what you are photographing so that they don’t get over-exposed.
Concurrent Video/Still Capture – take both video and still simultaneously. While recording a video you tap the shutter button to grab a still. In addition you can also review the video in frames and keep any you wish. Wow.
Various camera settings:

The goal is to reduce background noises and make your calls as clear and understandable as possible. The Event had set up sound proof booths for this demonstration. The image below shows two booths, the right is where the demonstrator is and he is holding the HTC EVO™ 4G LTE phone. I stepped into the left booth and heard the fellow on two phones: the 2 year old EVO without HD Voice and the new EVO WITH HD Voice. The fellow I was speaking to had loud music playing in his booth. When I was speaking to him with the older EVO I heard the music damp down when he spoke and it popped up again when he didn’t speak (when he was listening to me talk). When I took the new EVO phone I did not hear the music AT ALL. I’m not kidding. It was entirely OUT. The man’s voice sounded a just bit deeper than a normal call but it was clear and crisp. It was impressive. Now, the “trick” with this is that HD Voice can only work between two EVO phones with HD Voice and on the LTE network. Sprint is moving away from it’s 4G WiMax network into the new LTE network. This will be available in six markets (Atlanta, Baltimore, Dallas, Houston, Kansas City and San Antonio) by summer. The entire 4G LTE network will be completed by the end of next year.

Beats Audio works with any and every audio needs you and your phone may experience. Like YouTube, Pandora, your own list of music, and so on. The audio settings change depending which device is connected. I was also informed that their Bluetooth is Lossless! :

Beats Audio Headphones. Note the red cord and accent color. They sound quite nice. Very clear with a healthy range of tones:

I have to admit I am impressed with this phone. Light and easy to use with an impressive camera and great sound qualities. Sounds like a winner to me.