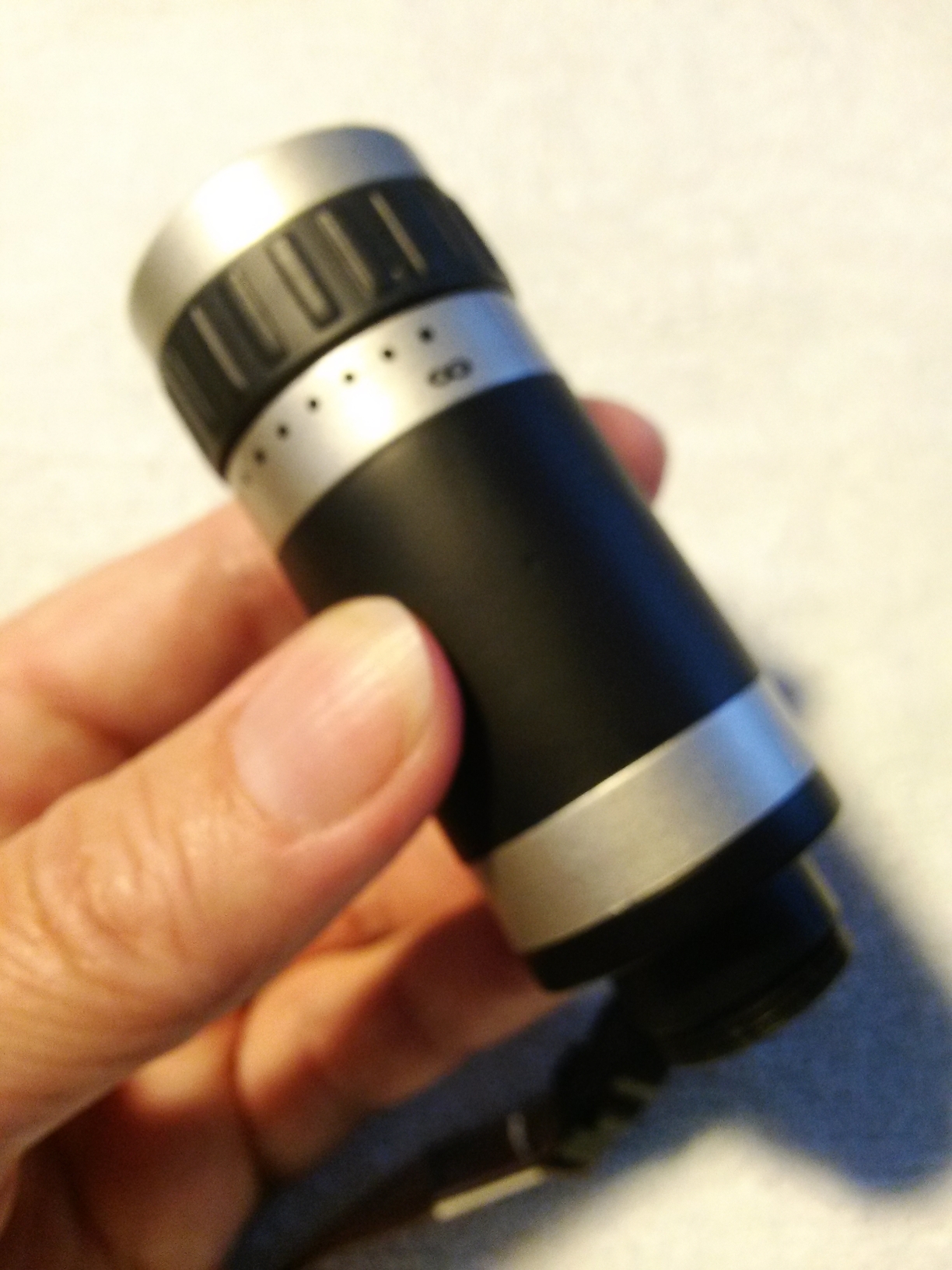 These days cell phones have more sophisticated cameras with more mega pixels and features. They aren’t at the point where they can replace a real Professional Camera but the talented amateur can certainly have lots of fun. These two products are separate (just to be clear). But they can be used together if you desire. So let’s look at the first one:

The Long Range Telescope and Photo Lens Case for Samsung S 4 includes a Case which snaps on the back of the phone, the Telescope (which screws into the case) and two different micro fiber cloths.

I found I can snap the “Lens Case” over the original Samsung case Or simply replace it. It depends on what works best for you. One thing you should be aware of, however, is that this “Lens Case” covers the Flash. So, if you are planing on taking flash pictures using the normal camera lens before or after using the Telescope keep your original case on and just add/remove the “Lens Case” as needed. It’s not difficult to slip the case off but it helps to have nails. As you can see in the picture the Telescope also comes with a strap. That makes it easy to carry when it’s not screwed into the case.

As a test I took a picture without the telescope – this one below.
The next photo is with the Telescope lens on.
Note the brick pillar in the center of this image.

This picture is taken with the telescope attached. By the way, the telescope has 8x magnification and can be adjusted with the focus ring .
Now the brick pillar feels 10 feet away.

Photo taken without the telescope lens:

Photo taken with the lens attached.
Note the curving in the bricks.

Finally got a sharper image. I need to monkey with the lens focus ring more.
Took this from across the street

Here I took a photo with the Telescope while using the tripod to stabilize the camera
if you zoom into the black timer you can clearly read all the numbers. (Do that from the Picasa site where you can zoom in easily. Click the link at the bottom of the image)
This was taken from about 20 feet away

So, I was sitting in one of my favorite coffee houses and decided to sneak a peek at people while they chatted in their seats. The Samsung S4 has the ability to pause a movie while filming. I attached the Long Range Telescope to the Samsung S4. I also attached the phone to my mini tripod via the iStabilizer.
The original resolution of the film is 1920×1080. Use You Tube’s settings to look at it at the highest res it will go.

Since we have arrived at this point…the second product is:

The iStabilizer Smartphone Tripod Mount can be used with any smart phone. And probably can fit any tripod because the bottom has the standard screw hole. This basically makes me do the Happy Dance because I can get years of use out of this product. It’s quite simple. Pull the top to fit the phone, screw in tripod. Point camera. Shoot. The screw is metal so it won’t wear out. And there is foam padding in the areas that touch the phone so your devices will never be damaged or scratched.

The iStabilizer Tripod Mount attached to my mini tripod

Check out MobileFun.com. They have mighty cool stuff there.