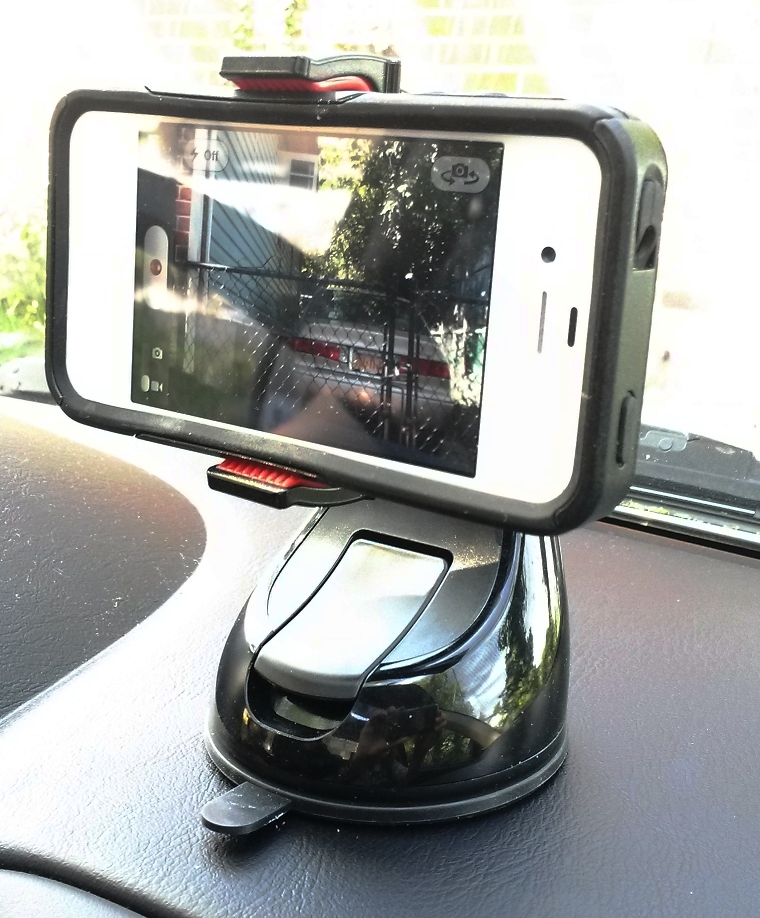 Osomount: Stick Your Car Mounts like an Olympic Gymnast!

Osomount very kindly sent me three different mounts for review. I used two of them and sent one to my brother to test out. I was very impressed with how solidly these mounts were built. It’s obviously they were well designed not only for many years of use but they are attractive.

The first one I played around with was the ClipGrip or Dash Grip I love the delightful red silicone accent grips which hold your phone or GPS device firmly. It gives you complete confidence that your precious devices will never fall out. And the suction cup sticks to whatever flat(ish) surface you attach it to. Like a dog with a bone, it won’t let go. You can slap it on a kitchen surface or wood table as well as your car. This is quite the versatile mount. Whichever surface you need it on the first thing you should do is give that surface a nice cleaning. The suction cup is naturally sticky and you don’t want any dust or dirt interfering with that. On the chance that the suction cup ever becomes a bit dirty just run cool water over it and don’t wipe with a cloth (these will stick to the cup). Just let it dry naturally.

So I washed the top of the car dash nice and clean and STUCK the mount where I wanted it. The body of the mount has a lever which you snap into place. This compresses the cup so the suction REALLY holds the mount in place. When you pull up the lever and then grab the small “clip” or tongue (that is part of the suction cup) this helps you remove the mount from the surface it’s attached to. Yes, it really does stick.

Here I twisted the clip so I could hold the phone in a vertical position.

I stuck the mount to the window! I just cleaned the glass first.

Here’s a view of the ClipGrip from drivers seat

I’ve always wanted to make this video – Hands free!. But I can’t drive and hold a phone at the same time. I’m just not crazy. So getting this mount for review was the PERFECT opportunity! For this experiment I used the Samsung Note 2 and it’s 8x Sped up movie feature. I set up the camera before I clipped it into the mount. Then drove away!

Shot with a Samsung ATIV S™ Neo (Windows 8 OS). Used a ClipGrip mount. Default settings on the camera except Solarize.

YET another crazy video

The next one I experimented with is the Tablet Mount. This mount will grip any device that is up to 200mm wide. That’s most medium sized Galaxy Tablets and iPads.

The dash on the car has a slight curve so I used one of the thicker Rubber plugs that comes with the Mount. This thicker plug is attached to the BODY of the Mount while the thinner Rubber plug is shown to the left of the Mount.
The Joint between the Body and Holder is visible. This Joint allows for a great deal of mobility for a variety of viewing angles.

The Holder has an opening for a charging cable.
The makes it easy to position your device exactly the way you need it and still keep it juiced up.

The Body is upside down in this photo. Here you can see the suction cup with it’s protective plastic cover (to keep it clean when not Sticking to your dash)
To the left is the Joint can be unloosened and tightened with the included Hex Key. This gives you incredible versatility for movement and positioning.
Here you can see the Grip Section is completely extended.

I gave the 360 Grip to my brother to test out. He was concerned at first that the 360 Grip mount might not have sufficient angular movement but once he tried it out his anxieties were relieved. Before we stuck it on his car dash he had been using in his home and found it quite useful just as a holder for the phone. Even without using the suction cup.. He was quite impressed with the red silicone accent grips. There’s no question the phone is quite securely held between those arms.

We took a bumpy trip which should show just how well the Mount stays stuck exactly where you put it.

If you care about your phone or GPS device, trust it to one of these Mounts. You can depend on it!