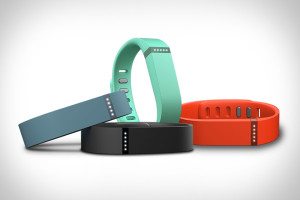 Fitbit vs the future…

Credit where credit is due, I’ve been a Fitbit owner for about three years now.  They make really great products, and they have a good, solid ecosystem built around their products to help you track how far you’ve walked, jogged, or moved.

Depending on your choice of Flex, or Fitbit One, they even track the flights of stairs you’ve climbed, and — to an extent — provide sleep tracking to let you know how well, or how badly you slept the night before.

To say that I’m a supporter and fan would be an adequate, if not slightly understated, notion.  That’s why I’m worried about the future of Fitbit…

Fitbit, like several other makers of activity trackers (notably Nike, Jawbone, and Withings), created a universe where you essentially strap on another rubberized wrist band then you immediately became aware of how much activity you were getting in.  You could then track, graph, and totally data-geek out on all the information presented to you.

They’re fun, informative, and in most cases, extremely motivating to help get you off of the couch every once in a while..

Unfortunately, I have a feeling that it’s all about to end and here’s why…

On June 2nd, 2014, Apple CEO Tim Cook and his merry band of laid-back execs took the stage for the annual “shot across the bow” WWDC keynote speech.  During the nearly two-hour presentation, they regaled us with pretty pictures, graphs, and promises of a bright future for the Apple faithful.

Like most fanboys, I am now truly psyched about all the upcoming software updates, new features, and all the developer goodies coming down the pipeline.

None of those features however struck me like the — albeit brief — presentation about something they’re calling “Healthkit”.

Healthkit is in part, a section of Apple’s new software development kit (SDK) intended to provide a common ground for Activity Trackers, scales, health monitors, and other devices.  It’s a way for them to all talk to your iPhone/iPad, and share all that information in a wildly cooperative way, and even to help share that information with your doctor.

As one of the millions of Americans who is struggling with my health as I get older, I cannot adequately tell you — outside of privacy concerns — how absolutely cool that sounds.

So.  Why is that a problem for Fitbit?

Regardless of which model you own, a Fitbit is a dedicated device.  It has its own charger cable and USB dongle.  It communicates via Bluetooth to your computer.  It is yet another — albeit light — device that you have to remember to charge, then either carry, or strap on your wrist for the day.

Here’s why I think that’s a major, major problem for Fitbit...

Speaking for myself, I use my Fitbit Flex to share data with a site called “MyFitnessPal.com” (aka “MFP” because I’m a lazy typist).  MFP allows me to track both my activities, exercise, and calories for dieting throughout the day.   It’s an incredible tool for those like me who have lived on American cheeseburgers and fries for our entire lives and want to change things.

MyFitnessPal.com already integrates with dozens of fitness apps as well as physical devices ranging from my scale, to my Fitbit, to my Heart Rate Monitor to help best figure out how many real calories I take in, and how many calories I burn throughout every single day.  If there’s an activity tracker or health device, chances are MFP can integrate with it.

Where this becomes a problem for Fitbit is that MFP also integrates natively with the M7 chip in the current iPhone 5s.

Once iOS 8 and OSX 10.10 with Healthkit comes out, and once people start moving to the iPhone 5s and beyond, the Fitbit (and those like it) become redundant if not irrelevant.

This past Monday (as an example), I forgot to charge my Fitbit, so left it at home.  I changed the settings of my MyFitnessPal app on the iPhone to use the M7 motion chip to track my activity, and soon after realized how little I actually need the physical Fitbit at all.

The iPhone 5s combined with MFP is able to track my activity just as well as the combination of MFP and the Fitbit Flex.  Chances are that if I’m physically moving, my iPhone is in my pocket, so what I’ve realized is that I don’t have to keep track of another device, its charging, or synching it to the Fitbit site.

Which — as sad as it makes me to realize — has made Fitbit irrelevant.

All is not lost?

Fitbit, like Jawbone and other manufacturers still have a chance here.  Nike has already seen the writing on the wall, because they recently canceled production of their similar “Fuelband” device and are now concentrating on software which will pretty much integrate into Healthkit.  (My purely uneducated guess is that Nike might have actually had a good bit to do with the development of Healthkit already).

Not everyone on the planet will buy an iDevice with an M7 chip in it.  The world consists of equal parts Apple, equal parts Android, and a little fading blip of Blackberry devices.

Faced with a blooming 4.2 Billion (with a B) per year market, it’s a simple, economic fact that Google won’t be able to stay out of the fray and will somehow clone, adapt, or write their own Healthkit infrastructure which leaves companies like Fitbit with nowhere to go on the hardware side of the house.  Their sales of hardware devices will shortly wither and die.

Similarly, Fitbit and Jawbone could steer away from hardware and build their own environment based on software and the M7 chip (or whatever Android devices will follow suit with).  Everyone has preferences about how they like their data.  That’s why there are dozens of apps in the App store designed to help runners train.

If Fitbit wants to survive, they’re going to have to figure out how to do that without hardware sales.