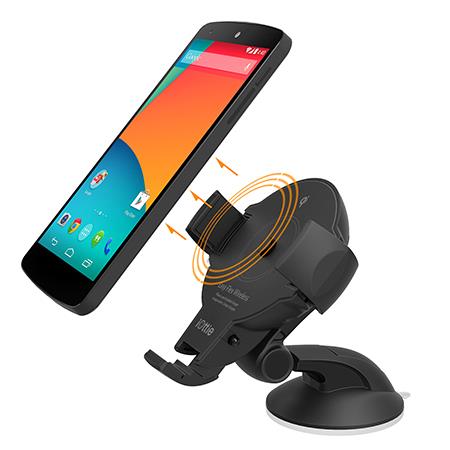 Car Mount is a revolutionary new concept. Utilizing the Wireless Power Consortium’s interface standard called Qi and pronounced “Chee”, this car mount actually keeps the juices flowing through your smartphone while it sits stationary on the stand. Compatible with any phone that has an inbuilt Qi receiver, it’s a one-size fits all kind of car mount, designed for the tech savvy consumer of tomorrow.

The iOttie sticky suction mount is well designed, compact and sturdy with smooth edges, flat surfaces and a perfectly shaped supportive base for your smartphone. In fact, it can accommodate smartphones with a back cover or case but this may hamper the wireless charging protocol.

In drop tests, it maintains its integrity when dropped from the dash onto the car floor with no visible damage indications. Moreover, the resistance in the clamps and the rotating head are strong enough to prevent damage through force if one intends to store it away in the passenger side documents drawer.

The bottom surface of the car mount features a suction cup with a specially designed sticky gel pad that can be washed and reused from time to time. Unlike competing brands, this sticky pad is highly adhesive and removing it takes a bit of effort if you misplace it the first time around. We found the car mount to aggressively stack on the dashboard such that it doesn’t budge even when forced to any side. In short, the gel pad does exactly what it ought to – stay stuck!

When the gel pad starts drying up, simply wash it and let it air-dry naturally for a day to rejuvenate the gel pads. These reusable gel pads are designed to last a lifetime as long as you periodically wash them.

The high grade quality build of the iOttie car mount coupled with the Easy Flex mechanism to rotate and orient your smartphone makes it easy sliding between portrait and landscape modes. It clicks into position preventing any further movement thus protecting your phone from jarring or vibrations felt through the dash. However, the rotating head will not orient at odd angles between the fixed vertical and horizontal positions. Rather the head stays unlocked if its forced into such positions so don’t try to swivel it into oblique or diagonal angles.

A car mount is only as good as the clamps and usually clamps that shut tight around a device tend to be difficult dismounting from but not the iOttie Wireless Easy Flex Car Mount. This mount features retractable side clamps and fixed bottom support to hold your phone in position. To slide your phone in just push it against the side clamps and watch as they extend and contract back into position to rigidly hold on. As for removing your smartphone, simply apply a little pressure against the clamps while pulling it out and they release instantaneously.

The spring based clamps do not seem flimsy and in fact inspire confidence in the car mount’s entire design. Even if you try to accidentally release the clamps, they don’t click out unless you apply pressure from the top by holding onto the phone from directly above.

Qi – the wireless charging standard used worldwide now comes to your car with this iOttie wireless car mount charger. Qi charging in this mount is only possible if you own a phone that supports inductive charging. Examples of current generation smartphones that offer Qi charging include LG G2, HTC Droid 8X/DNA, Droid Motorola Mini/MAXX, Google Nexus 4/5, Nokia Lumia 928/920 and a few outside compatible devices such as the Note 2/Note 3/S3/S4/S5 from Samsung (provided you use their own adapters). With this feature, you never again have to carry your car charger cord as your mount now doubles up as a charging pod. You can also purchase universal Qi charging pads to add to nearly any phone on Amazon or eBay. These connect to the MicroUSB port and can be put inside the battery compartment or inside a cover/case.

How fast the Qi charging pad on the car mount charges your mobile device depends entirely on the receiver coil present in your phone. Nokia 920 and above usually charge a lot quicker than the rest but on an average it takes about 4 to 5 hours to charge via the inductive wireless pod. Regardless of the speed, the dock uses two LED lights to indicate the charge level in your Qi compatible phone. When both the LEDs light up, you can either switch off the Qi pad on the mount or dismount your phone.

Well-known for quality covers and cases, iOttie also makes some of the best car mounts for smartphones, tablets and GPS devices. The Easy Flex Wireless Qi Standard Charging Car Mount is the first of its kind by iOttie, which brings together their brilliant car mount technology with the inductive wireless charging standard issued by WPC in perfect harmony. If you have a Qi enabled device and wish to charge wirelessly in your car then this iOttie car mount is a must have and for those without wireless charging capability, it still functions as a good old sturdy car mount with excellent suction pads.

Thanks to our friends over at Mobilefun.com/Mobilefun.co.uk for providing the review unit.