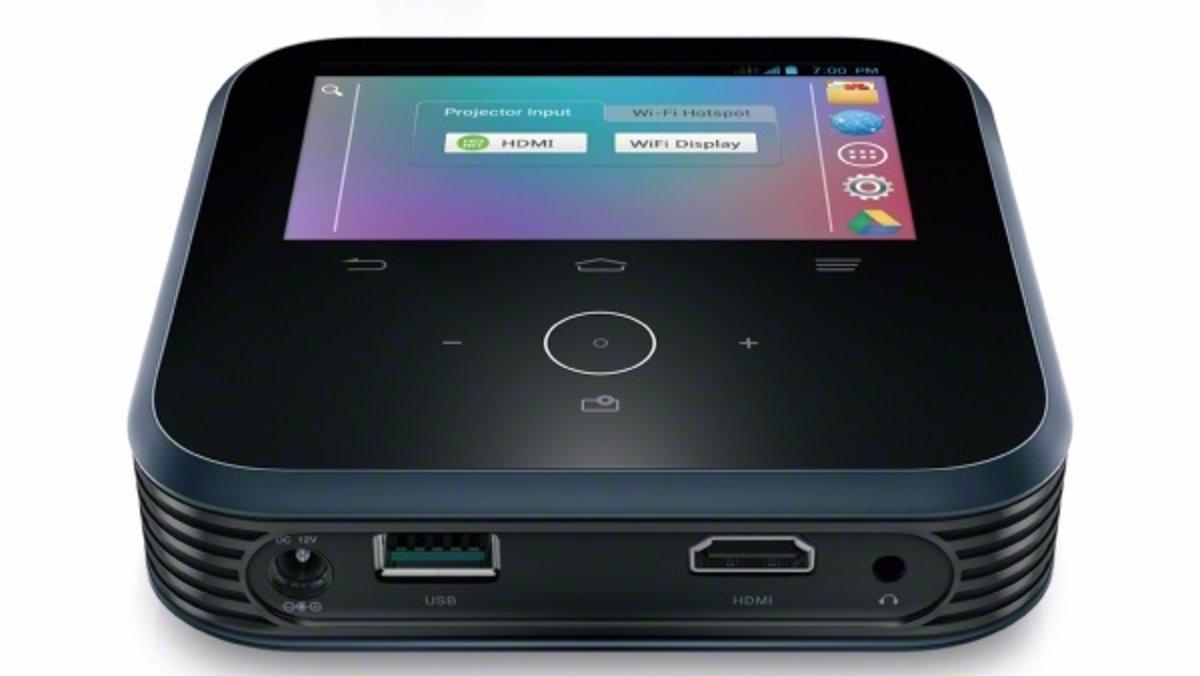 Just when it seemed as if the world of portable devices was complete with tablets, smartphones and more, Sprint brainstorming team had an eureka moment. The end result is the Sprint LivePro and it is more than just a portable projector!

To get an idea of why you would even want to consider getting a portable projector let’s first take a look at the numerous places where one can use such a device. An ad-hoc presentation with a client at a neutral venue, when the boardroom projector unit fails, in parties to share personal moments or even revel in a new movie that you just downloaded off the internet – these are just a few of the scenarios where a portable projector would come handy but projectors by default have always been as large as laptops so they aren’t exactly portable considering what little they can do other than projecting onto a flat surface. This is where Sprint LivePro tends to make a huge difference.

More Than A Projector

While Sprint wants to sell the LivePro as a mini-projector first and foremost, it is in fact a multi-faceted device capable of doing so much more. For starters, it comes with 3G/LTE mobile hotspot to share internet with compatible devices. It also features Android 4.2 Jellybean OS to help new users immediately get acquainted with the device without requiring an instruction manual. It has a massive 5000mAh battery that acts as a portable charger. And the list just keeps on growing!

Let’s take a closer look at all the features of this unique creation one at a time.

Yup, it measures just 4.7 by 4.7 inches with 1.1 inch thickness so it is actually much more compact than a smartphone. You can practically carry it in your pocket, purse, backpack or anywhere you think possible. A built-in folding stand helps set up the projector and since it operates on Android, starting and using it is as simple as interacting with its touchscreen.

Projection quality is governed by multiple variables because it is at the end of the day a projector. The video or image source, quality of encoding, the display surface all play an equally important role. But for those concerned with only the tech specs, it is full HD complaint so you can stream high quality videos and get near perfect resolution and performance from it provided you have an appropriate screen setup. Otherwise, the Sprint LivePro can broadcast onto any flat surface including walls, laptop hoods and much more. In fact, it can project a screen size ranging between 10 inches to 10 feet!

As mentioned before it can operate on 3G and LTE so depending on the connection availability and your plan you can get either or both. Besides, it can stream data through Screen mirroring using Miracast with compatible devices so even if you lack internet connectivity directly on your mini-projector you can share your smartphone or tablet screen using it as the source. It also connects via HDMI and USB.

Yes, the Sprint FirePro also happens to support mobile tethering with maximum connections possible set at eight. This basically means it can convert into a portable modem capable of providing high speeds to a small conference or meeting.

Provided with a USB out, the Sprint FirePro uses its 5000mAh battery to charge smartphones and tablets indicating the power level on the screen. This works regardless of projector mode. Hence, you can use it as a projector and at the same time charge your phone via a USB cord. A noteworthy mention here would be the fact that the device can also connect to your PC, laptop and mobile using the USB port.

It wouldn’t be a portable projector without built-in speakers. Granted they aren’t ear splitting but they get the job done in a silent environment, especially in presentations or speeches. As for watching movies, don’t expect a theater like performance. Thankfully, the device does come with Bluetooth and a 3.5mm jack so you can either connect external speakers directly or pair through Bluetooth and enjoy premium sound.

Since it uses Android OS, you get the full benefits of Google Play store. Download apps, books, songs and thousands of movies directly and enjoy wireless entertainment at its best. It also comes with Google Mobile wireless services such as Google Search, Google Chrome, Gmail, Google Drive, Google Calender, YouTube and Google Maps.

At present Sprint plans to sell the LivePro directly in select Sprint Stores or through direct ship sales channels offering to well-qualified buyers a zero down payment 24 month payment plan. The data plans for the LivePro start from $34.99/month for 3GB of 3G and LTE and goes up to $79.99/month. With 471 cities currently offering 4G LTE, this pocket dynamite is sure to become a hot-seller. The only question remains is whether the public will appreciate the effort put in by Sprint to make something revolutionary out of existing technology.

In all honesty, we haven’t yet seen a device so capable and yet so affordable. The reason to have a LivePro actually outnumber the reason to have a smartphone and in our opinion, this definitely gives a glimpse of the future of portability. Imagine virtual reality, next gen online gaming, advanced cloud services and just about anything that requires extremely high bandwidths – that’s where Sprint LivePro will leave its mark.

As for the present, it is a device with multiple uses and as such it is something anyone will benefit from. Is it a must buy? No, but the Sprint LivePro is definitely a justifiable purchase.