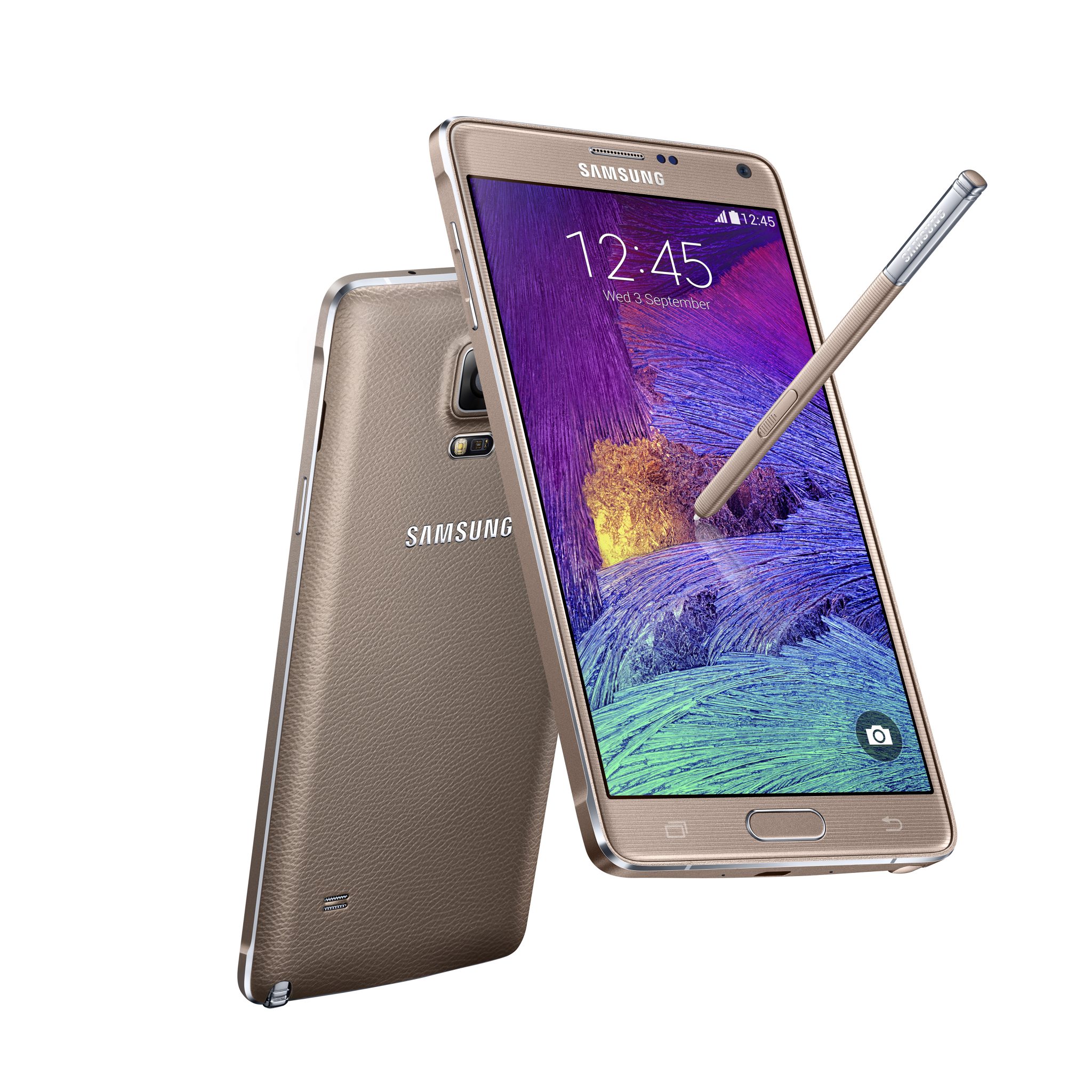 Galaxy Note 4 – The Best Gets Better

A Metal Frame, a QHD Display, and across the board improvements perfect the Note experience

At Samsung’s Unpacked event in NYC, Gadgetnutz experienced the Note 4 first hand. This Note has a better feel than previous models. It is a fully premium device. The faux leather stitching of the Note 3 is gone, replaced by a backing that is nicely grippy and not at all plasticy.

The new Note is the first to have an entirely metal frame. Previous Note models have featured a metal-like plastic-chrome frame. The Note 4’s metal aluminum frame is a welcomed improvement, granting sturdiness while advancing aesthetics.

The previous Note was a fast machine, but the Note 4 is not just faster, it’s noticeably faster. An improved processor in either 2.7 GHz quad-core or 1.9 GHz octa-core, (depending on market) combined with a faster graphics core creates buttery smooth performance. Considering that this processor is now driving a screen with nearly 80% more pixels, the speed improvement is quite an accomplishment.

The size of the latest Note is nearly identical to that of its predecessor. Unless held side by side, it’s nearly impossible to tell that the Note 4 doesn’t share the Note 3’s exact dimensions. This latest model is actually about 2 mm taller, .6 mm narrower, and .2 mm thicker. The metal frame presumably adds a handful of grams to the weight, but even when sitting the two devices side by side, these dimensional differences are vastly overwhelmed by the similarities.

There will be four color selections at release, Black, White, a sort of champagne bronze /gold, and a very light pink. In person, the pink is almost so light it could be a white phone as seen under red lighting. We quite liked each of the color selections, though we wonder if the light-pink Blossom colorization could find itself in especially high demand.

There is barely a function within the new Note that hasn’t been upgraded, polished, or improved. Along with the faster performance, the latest version of Samsung’s Touchwiz features a card-like interface similar to that previewed in Google’s new Android L. It allows multiple apps in stacks of card-like windows that can be adjusted, overlayed, and resized.

Both the front and rear cameras have been greatly improved, and not just with megapixels, though there is that. This latest Note ups the ante to 16 megapixels on the rear facing camera while the front sensor has been upgraded to 3.7 megapixels. The more meaningful addition is likely to be the inclusion of Optical Image Stabilization on the rear sensor and an F/1.9 aperture on the front “selfie” camera. These should vastly improve the quality of low-light photos and result in far fewer blurred shots.

The front and rear cameras now have wide angle modes. The front camera defaults to a 90 degree wide format while the higher resolution rear camera defaults to an ever wider 120 degrees. Both of these changes should work to produce images more representative of the way human vision works, with more imagery to the sides than up and down. Also included are new camera modes, including a real-time High Dynamic Range feature.

Both the charging and battery system have been improved. The Note 4 makes a welcomed move back to the far more common USB 2.0 micro-b standard, abandoning the ungainly USB 3.0 micro-b charging / data port used on the Note 3. While a USB 2.0 port will produce slower cabled data transfer, the Note 4’s charging speed actually improves. The Adaptive Fast Charging / Quick Charge mode lets the Note 4 juice to 50% in just 30 minutes. This is quite an impressive feat for a battery now squeezing in 3,200mAh of power.

As with all Samsung smartphones, the Note 4 features an easily swappable battery. At Gadgetnutz, we applaud Samsung’s continued response to customers who have no wish to continually chase down power outlets. We have yet to test battery life on the Note 4, but Samsung reports it will be quite similar to the all-day life seen on its predecessors.

There are now multiple microphones, much as seen in dedicated speakerphone systems. This should produce far better noise cancellation, especially when used in loud areas or automobiles. The multiple microphones are supported by some fascinating software that purports to allow selective and isolated playback from each of eight different sources. If placed on a conference table, it should permit discrete playback of any individual speaker, even when talking over one another. This is a detail present on some high-end professional recording devices and it’s one feature we can’t wait to try out.

Where the Note 4’s display truly shines is with its unrivaled density. Heralding a full Quad HD resolution of 2560 x 1440, the Note 4 packs over 500 pixels into each inch. This is a density so extreme that even the most eagle eyed critic could not possibly hope to discern pixelization. When compared to its predecessor, the Note 4’s Super AMOLED screen shows 78% more pixels within exactly the same area.

This already impressive Screen is not flat, it is cambered in what Samsung calls 2.5D. In rough terms, this means screen curves down ever so slightly at the sides. There are some suggestions that this curvature can reduce both screen breakage and unwanted reflections.

Bucking industry trends, the Note 4 continues to include a MicroSD memory card slot. Officially, the Note 4 supports cards up to 64GB in size, though we suspect 128GB cards will also be supported.   Many manufacturers seem to believe that memory card support inclines users against upgrading. Since Samsung sells more smartphones than any other maker and nearly all of them include microSD card slots, clearly, MicroSD card support doesn’t hurt sales. MicroSD card support is another area in which Samsung continues to receive the hearty approval of Gadgetnutz editorial staff.

The Note 4 features a fingerprint scanner, one we’re told has been greatly improved over that in the S5. We can’t wait to stop typing in pin codes and passwords. A quick fingerprint scanner will be a real benefit to us, and we presume, many users.

A heart rate monitor is included on the back of the device and ties in with Samsung’s included fitness software. A UV sensor is included to warn of harmful solar emissions. The pressure sensitivity of the S Pen has been doubled. The S Pen software been optimized with new Image-Clip, Screen-Write, and Action-Memo features. The Note 4 includes the latest in wireless technologies, including 802.11 a/b/g/n/AC, GPS, GLONASS, and Baidu. NFC is included, but it is unclear if this is again placed on the battery or present on the device itself.

Bluetooth 4.1 is present with BLE and support for the much-under appreciated ANT+ standard. The Note 4 continues to feature an IR LED for use as a universal remote control, while MHL 3.0 is the supported method of cabled video output.

We’ve seen it, we’ve tried it, we liked it. To say the Note 4 is an incremental improvement over its predecessor is to understate its accomplishments. While its nearly the same form factor as the Note 3 and does have an identically sized screen, the hardware and software within are substantially revised, and in many cases, improved by leaps and bounds. That it will be the only device compatible with Samsung’s new Gear VR should drive sales even further.

The Note 4’s premium look and feel combined with its exceptional hardware and software suggests it should be the most popular Note yet.

Note 4 will be available in early October. At release, there will be four color selections – “Charcoal Black,” “Frost White,” “Bronze Gold,” and “Blossom Pink”.

The Note 4 will be available in the US from AT&T, Sprint, T-Mobile, US Cellular and Verizon.

* The availability of each service may differ by country.

* All functionality, features, specifications, and other product information provided in this document including, but not limited to, the benefits, design, pricing, components, performance, availability, and capabilities of the product are subject to change without notice or obligation.