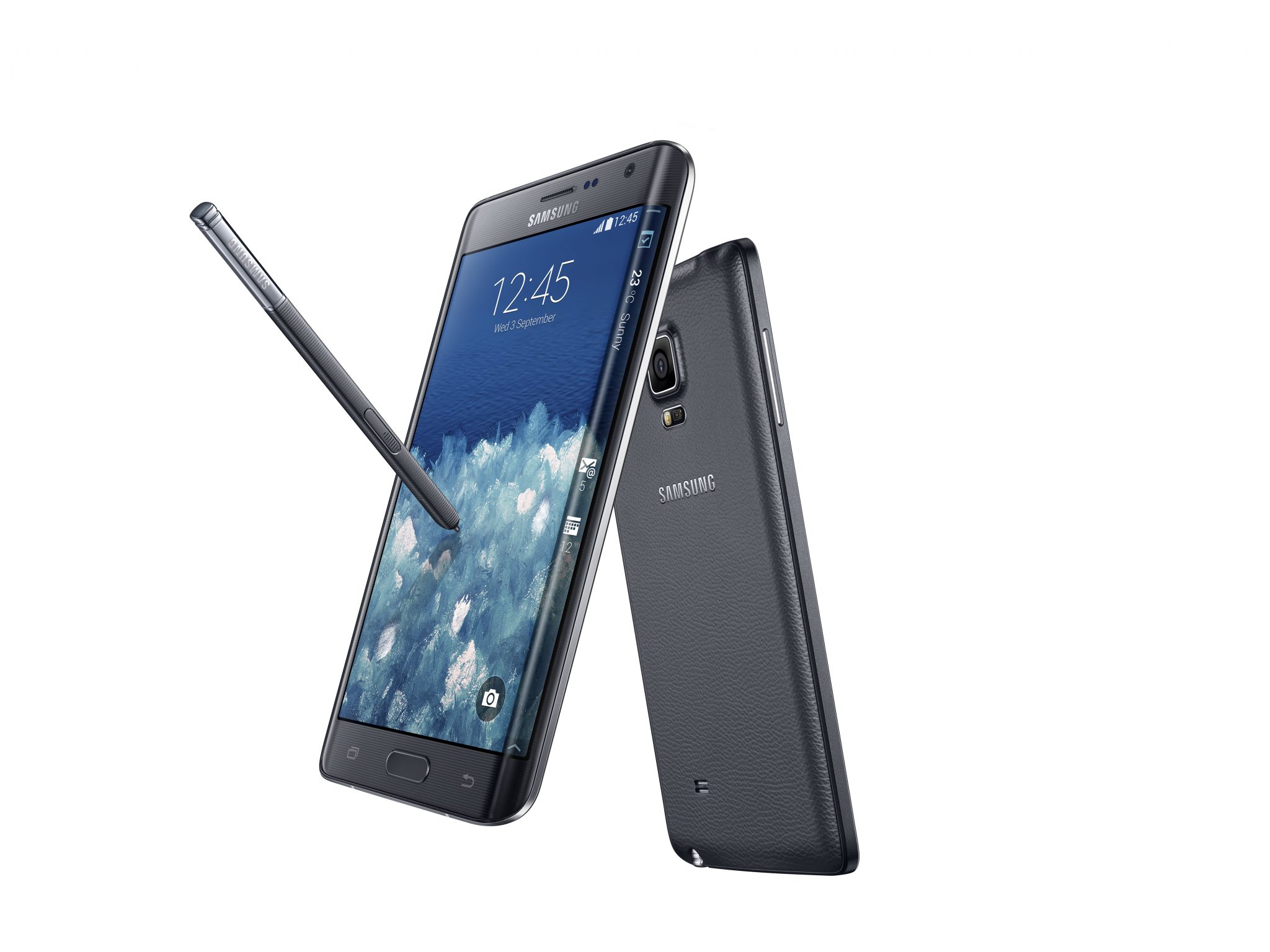 In almost every way, the Galaxy Note Edge is identical to the simultaneously revealed Galaxy Note 4. The Edge will have the same new processor, the same pen, the same cameras, the same new everything but with one attractive and functional difference, a screen that curves away.

The screen on the Note Edge features a contoured bend along the entire right side of the device. The swooping curve is so striking that it will not be possible to confuse the Note Edge with any other device on the market. In an era dominated by large slabs of undifferentiated glass, the Galaxy Note Edge differentiates.

The curved portion of the screen is not just a pretty embellishment, it’s a surprisingly functional addition to the device. The edge functions as an entirely separate secondary display, and for this secondary display Samsung has developed a number of edge display applications. Current apps included weather, sports tickers, fitness monitors, and an optionally always-on alarm clock.

In our brief experience with the Edge, we found the screen-edge applications easy to use and simple to customize. The edge-screen works as an entirely separate display while smartly rejecting errant presses on the main display. Since under the hood it’s all one screen, this is an impressive bit of software engineering.

We found the included screen-edge apps to be quite good and expect many will be heavily used. There are shortcuts to many commonly activated features, including the camera. Video can be played in the full main screen, with all pause, play, and scrub controls on the second screen. The camera and other functions will also be controllable through the secondary, edge display, removing the need for a dedicated camera button. With further customizations, the edge display could remove the need for most dedicated hardware buttons.

Of the apps we tried, the clock app seemed especially worthwhile. It allows the main screen to remain off while persistently displaying time, date, and alarm information on the edge display. It’s such a simple concept, but having always-on time from a phone lying flat on a night stand could be a real killer app.

Because only the edge portion of the screen remains on, it should allow time and date information to remain displayed all night without especially impacting battery life. Being able to see the time and date from a phone lying flat on a nightstand, without touching or waking the device is a seemingly small advantage, but it’s one that users may soon find themselves relying upon. It’s little things like this always-on alarm clock that tend to sell one device over another.

We were truly sold on the viability of the edge display applications and believe that once users start relying upon them they won’t want devices without it. Samsung is publishing an open API standard with which any developer can create and customize screen edge apps. While developing apps that can only function on a single phone model might not be the first thought of many developers, if the Note Edge is as big a hit as we believe it will be, this will be the first of many Samsung phones to feature an edge.

More screen – No loss of resolution

In our discussions with Samsung, they clarified that these are not dual displays, but just a single display with an actual resolution of 2560 x 1600, exactly 160 pixels wider than the display on the Note 4. The curved portion of the screen is addressed separately within software, but is in fact one single display. This makes the Note Edge the highest resolution cell phone, well, ever.

For the basic specifications of the Note Edge, please read our preview of the Note 4 here.  The two devices are exceedingly similar. The few technical differences seem entirely driven by the curved display on the Note Edge. One of the most evident changes is the power button. Because the entire right side of the Note Edge is, well, an edge, Samsung has relocated the power button to the top left of the device near the headphone jack.

Because of the larger screen, the overall dimensions of the device are oh so slightly different from those of the Note 4. The Note Edge has a 5.6 diagonal inched screen as compared to the Note 4’s 5.7 inches. The Note Edge is also about 2 mm shorter, 4 mm wider and actually .2mm thinner than the standard Note 4.

Specification differences between the Note Edge and Note 4

In our short time with the Galaxy Note Edge, we didn’t just see a gorgeous device, but startlingly different one. None of Samsung’s competitors will soon be likely to have anything resembling the Edge’s bespoke appearance. The curvaceous screened Note Edge is not just beautiful, its absolutely functional.

Wide availability is scheduled for early in October. There will be two color selections at release, Charcoal Black and Frost White.

The Note Edge will be available in the US from AT&T, Sprint, T-Mobile & Verizon.

* The availability of service may differ by country.

* All functionality, features, specifications, and other product information provided in this document including, but not limited to, the benefits, design, pricing, components, performance, availability, and capabilities of the product are subject to change without notice or obligation.