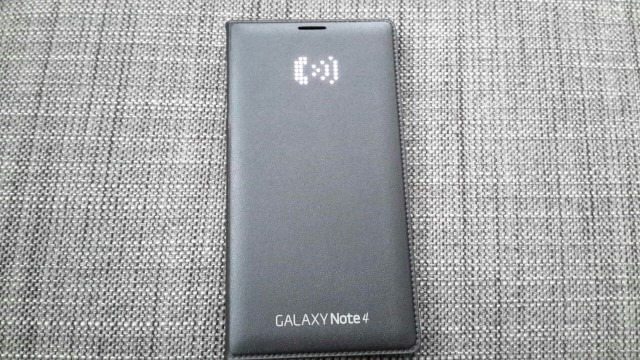 In our previous review we looked at the S View Cover and the Protective Cover Hard Case, two of the more popular choices for the Note 4. This time we have two unusual case options: the LED Flip Wallet Cover and the S View Wallet Cover. Why should you consider these lesser known options? Read on and find out.

Calling the LED Flip Wallet Cover unique is quite the understatement.  Samsung is known for their flip cases which either follow the S View Cover recipe, which basically has a clear plastic window that allows you to interact with the phone with the cover closed.  There’s also the other end of the spectrum, which is everything else that lacks this see-through window, such as their Flip Wallet Cover. The LED Cover is more closely related to the latter, but of course with a twist. While it looks like a standard Flip Wallet Cover and replaces the back cover just like one, it attaches to connector on the back of the Note 4 to power its LED lights. The beauty of this case is that when the LEDs are turned off, there’s no way of telling that they’re even there. 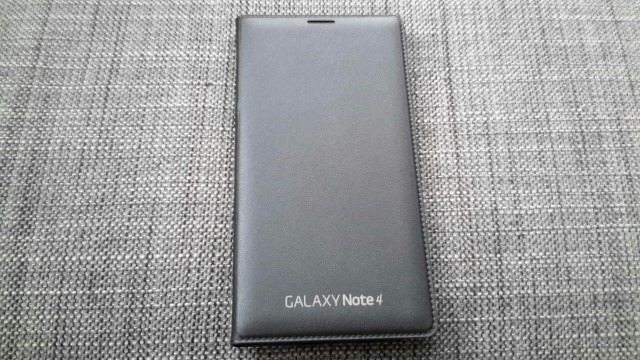 The LEDs don’t cover the entire flap, but a small area near the top of the flap. The effect of the White LEDs is subtle, elegant and ahead of its time. Obviously I’ve seen LED lights before, but there’s something futuristic and special seeing the LEDs dancing around, coming from something which even up close looks like a solid material where no light can shine through. I see S View Covers on a daily basis, so if you’re looking for the Note 4 to really stand out, your search should end right here. This thing is an eye-catcher and people will be asking and commenting on how cool it looks. The LED case or EF-NN910 comes in three colors: Charcoal Grey, Plum Red and Bronze Gold. Strangely missing is the color Black. 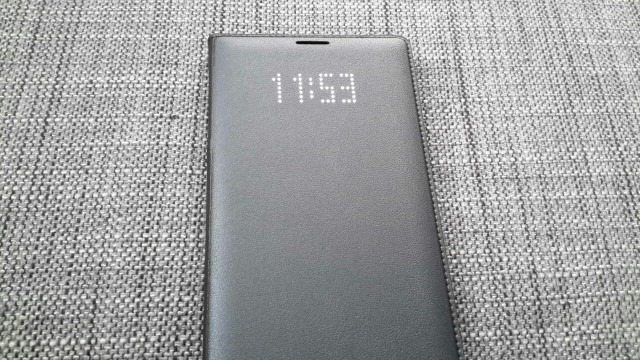 The piece de resistance is of course the LEDs on the front, capable of showing the current time, incoming calls, missed calls, SMS notifications, battery status while charging and volume level. When you start playing music and close the cover, the case will also show an equalizer.  In short, the case has dedicated icons and animations for the standard applications and notifications. For other non-standard app like Facebook and Whatapp, it will show 4 individual LEDs spinning in a circle. When there aren’t any notifications, closing the flap or pressing the power button will show the clock. Many have compared this to HTC’s Dot View case, when in fact it has more in common with the S View. While both the Dot View case and S View Cover have opening to let the screen shine through, the LED case has built-in LEDs that are powered by the phone. 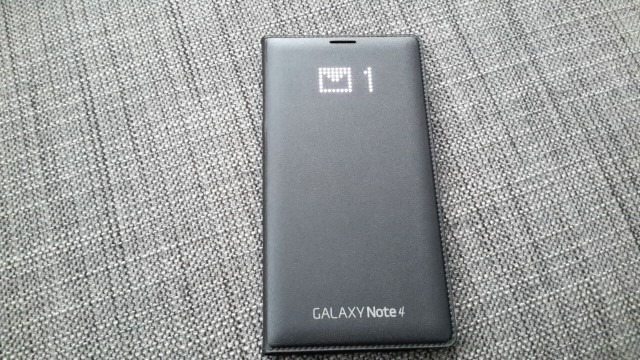 Coming from the S view Cover, your first reaction when seeing an incoming call is to swipe and start talking, but because the case the lacks any touch capabilities you’ll need to open the case and answer the call. Than close the flap and starting talking. This isn’t quite as convenient as the S View Cover and something you should be aware of when going for the LED case. I would love if Samsung could add basic touch or swipe capabilities to be able to answer calls without opening the flap. This would also apply for music controls. Two very convenient features found on the S view Cover that this case lacks. In the end this case displays notifications and it does it with style, but interacting with phone means opening the cover and doing things the old fashioned way. 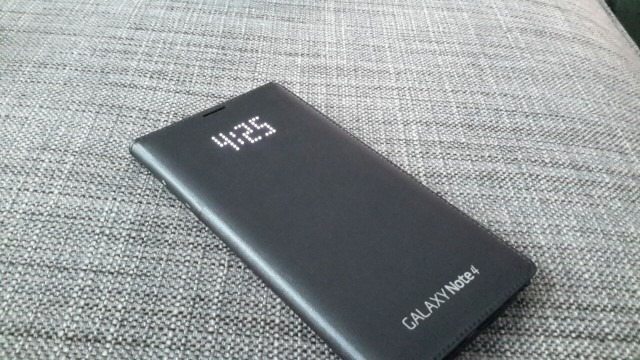 Design-wise the case looks simple, elegant and more traditional, an important reason to choose it over the modern and perhaps too flashy S View Cover. The material used definitely isn’t leather, but the textured closely mimics the look of leather and the effect is quite convincing, but the first time you touch the case there’s no denying that this isn’t the real deal. It feels much harder and as a result less likely to scratch or get damaged. There’s an opening for the earpiece on the front of the case, allowing you to talk with the case closed. There’s stitching on the edges which stick out a bit, adding some drop protection.  On the inside there’s space for 1 business or credit card, adding anymore cards and the case will simply not close properly. On the back it follows the S view Cover closely: wide opening to easily  take the S Pen out, a raised speaker grille and the camera module sits slightly recessed to offer some protection.

Of all the cases I’ve test, this is probably my favorite, because it combines the traditional case with an innovative way of displaying notifications. Some way of registering touch would make this the ultimate case. If you’re looking for features, the S view cover still wins. But based on design, elegance and LEDs, this is a serious case to consider. An almost perfect 9.9 out of 10.

Material is tougher than leather

LED light cannot be seen when off

One of the best looking cases on the market


Cons No touch capability/Screen must be opened to interact 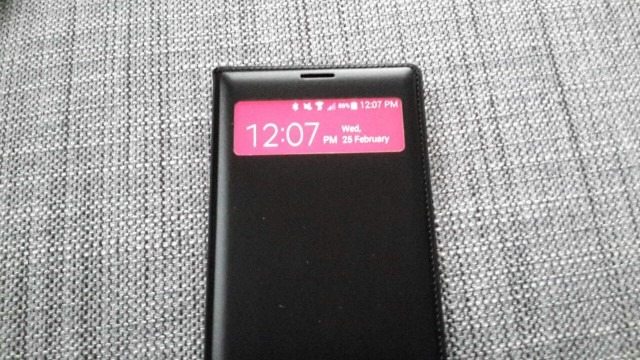 The S View Wallet Cover, not be confused with S View Cover which we’ve recently looked replaces the fairly large screen for something much smaller, adds a card holder and removes many of the extra features of the S View cover. Much of what has been said about that case should apply here. 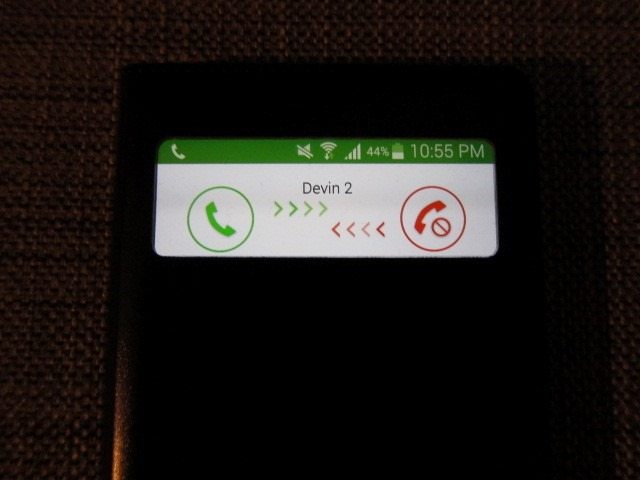 It uses the same smooth Black leather finish as the S view cover and the back is identical. The front is also the same, save for the smaller screen. On the inside there’s space for a single business or credit card, similar to the LED case. 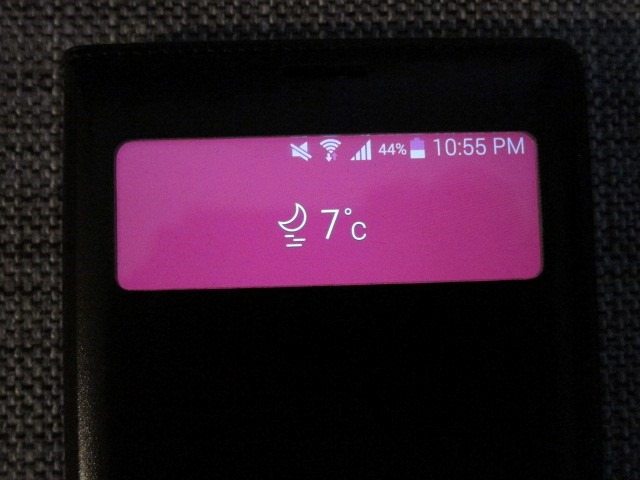 The big difference is not just the smaller screen, but also the software. While you can control your music, take and end calls, view the weather and steps taken,  a lot has been removed. Some of these exclusions like the camera is understandable. It simply doesn’t make any sense to show the camera view on such a small screen. But what really left us scratching our heads is the removal of the flashlight function and the ability to even change the background color or even using your own photos as background. Since all of this is powered by the Note 4, there’s absolutely no reason as to why the case shouldn’t be able to have the flashlight function or be able to change the background. What you’re left with is a disappointing hot Pink color that can be changed. You read that right, Pink is the only color you have and there’s absolutely no way to change this. 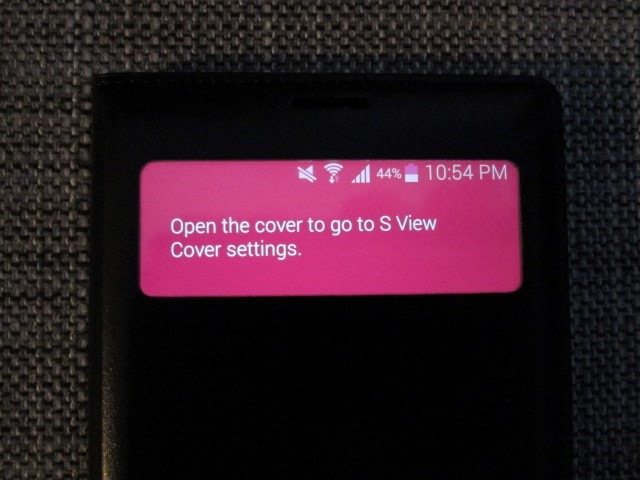 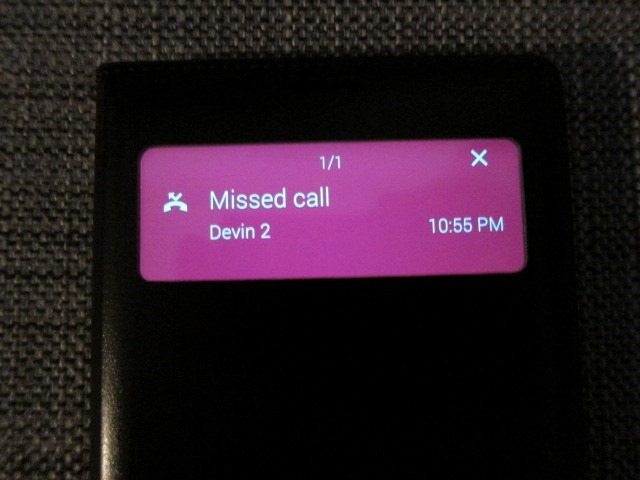 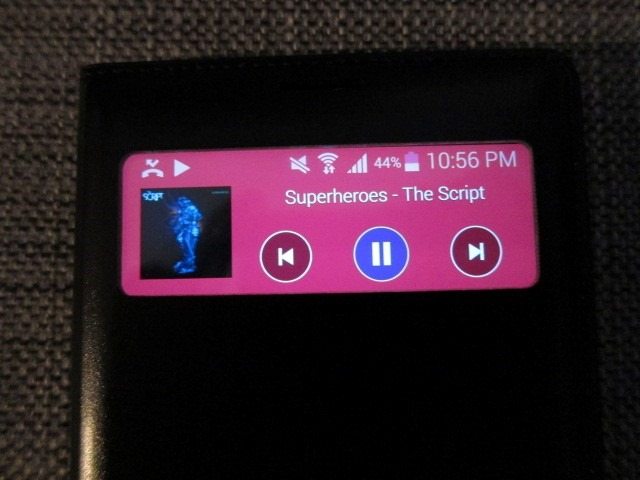 On the positive side, this case sit right between a traditional flip case and the full-blown S View cover, as a result, it looks better than the S View Cover while still maintaining its two most important features: pick up calls with the cover closed and control your music, making it more useful than the LED or any flip case for that matter.  Just make sure you can live with hot Pink. 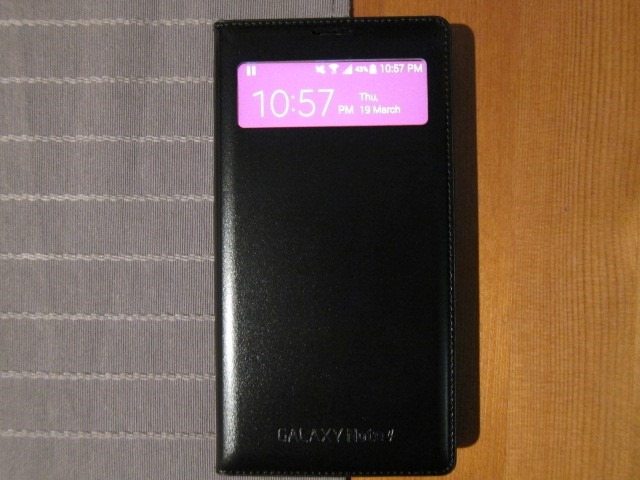 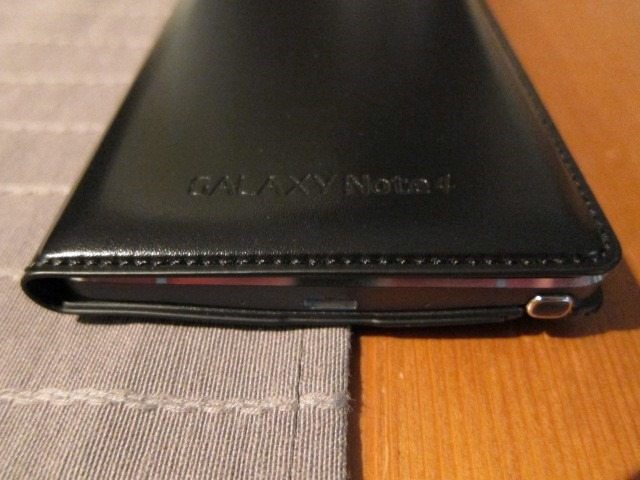 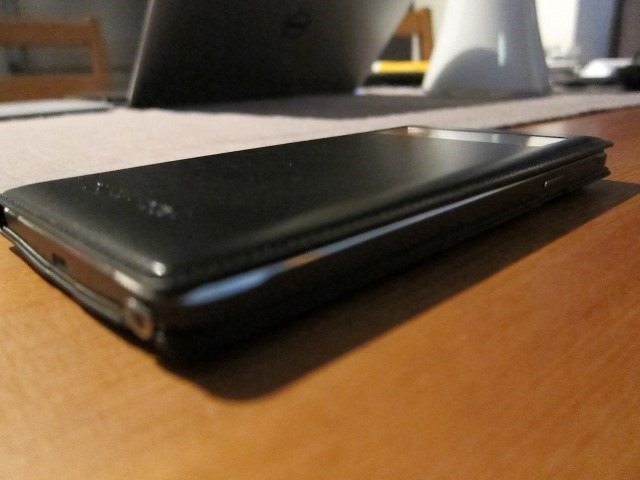 The standard view will show you the clock, date and any notifications. Swiping to the left will the show the weather and steps taken. Swiping to the left will show a message telling to you open the cover to change settings. The phone will than take you to just 2 options: enable automatic unlock, which allows you to unlock the screen by simply opening the cover.  The other option is choose which items to show on the S View cover: Weather and Pedometer.

In short, this case still maintains the ability the to show pick up calls with the cover closed and control your music and the card holder might be a plus for some. The smaller screen makes the overall case look better than the S View Cover, but it’s baffling why Samsung decided not to include the flashlight and a bad decision to force Pink as the background color with no ability to change this. With prices just slightly less than the S View Cover, there’s almost no reason to go for this case, unless you really like the design and want a place to hold a card. Our advice is to skip this one. It gets a 6.5 out of 10.

Flap can get in the way

To show the weather, you must turn location reporting on.