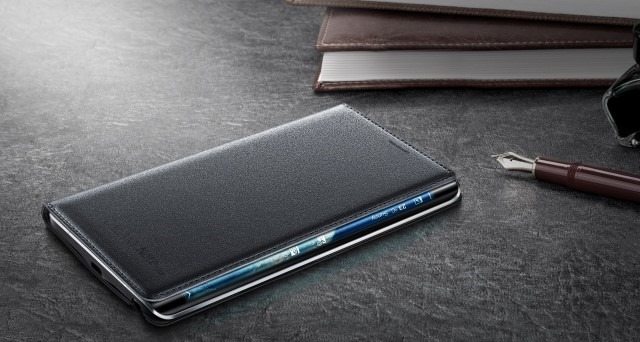 Cases for the Note Edge are few and far between and when it comes to official cases there’s just one: the Flip Wallet case. This is expected from a device that’s pretty much made in limited quantities as manufacturers don’t want to spend (much) R&D for a devices that’s not expected to sell in huge quantities. 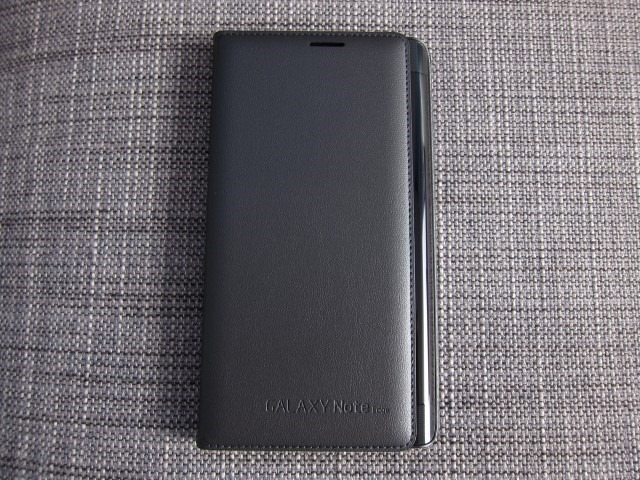 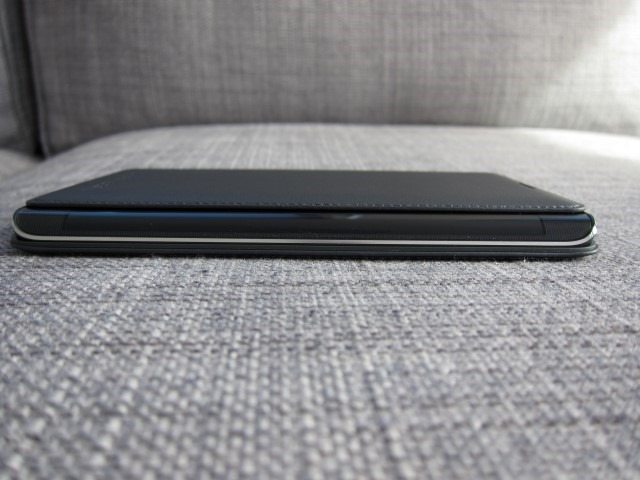 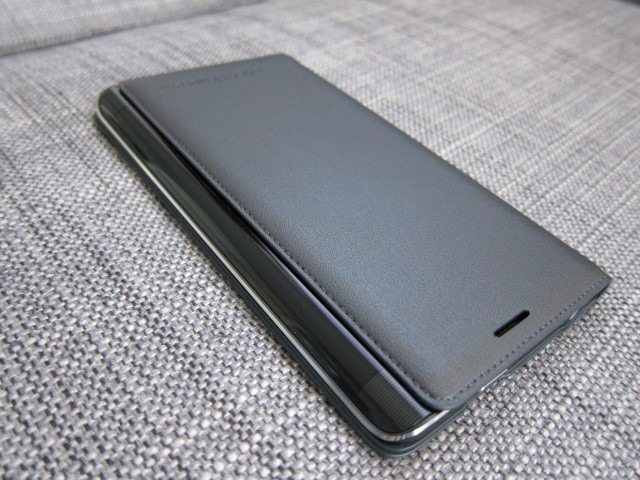 While most cases are designed around protection, the Flip Wallet case seems to be designed to showcase the Edge’s main feature: the edge. As a result, the case protects most of the phone’s display and replaces the back cover, similar to what’s found on Samsung’s Flip Wallet and S-View Covers, the front flap is much short to leave the edge exposed. As result, there’s no point in getting the Flip Wallet case to protect as it still leaves the most important and probably one of the most expensive parts of the Note Edge exposed, it’s curved display. The real reason why you’d actually buy this case is because it looks cool. 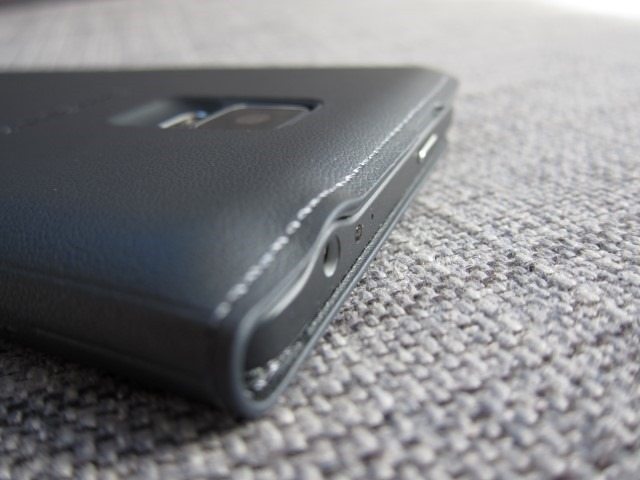 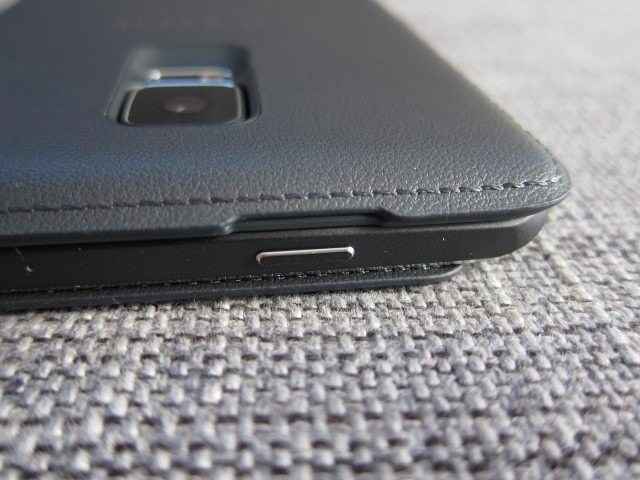 It’s even more eye-catching than Samsung’s futuristic S-View covers and scores as high as our recently reviewed LED Flip Wallet Cover when it comes to standing out. Using it in public, I constantly had people staring and even walking up to me and asking about it. There’s simply nothing out there like the Note Edge or this unique case. The two together offers an elegant and futuristic looking combo. 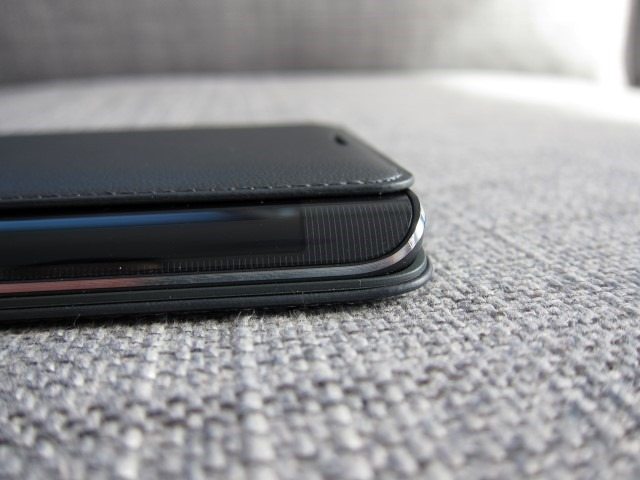 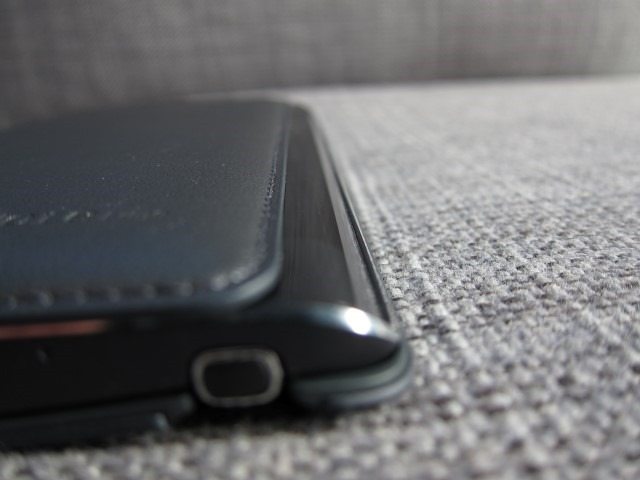 There’s no doubt here that Samsung isn’t using real leather, but polyurethane with a leather-like texture and stitching. It’s basically the same material as the LED flip cover, same back, lacking the LEDS and a much shorter falp. The effect doesn’t come close to leather, but still looks elegant and high-end, all while offering a more durability and scratch-resistance. On the friend there’s the expected GALAXY Note Edge logo and opening for the mic, which allows you to make calls with the flap closed.

On the inside there’s room for one business card. Just one, as adding any more will prevent the case from closing. 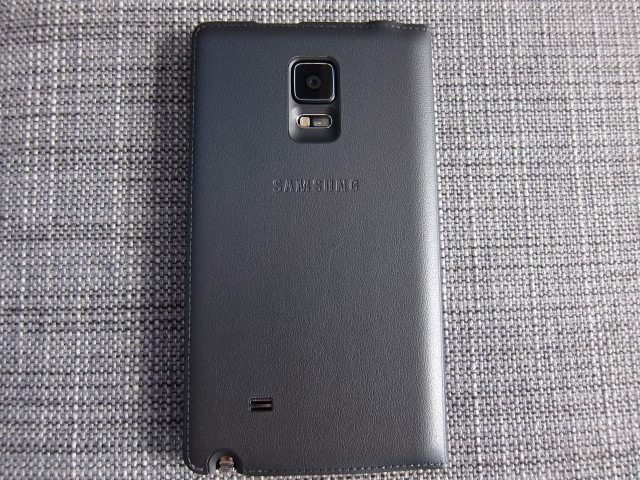 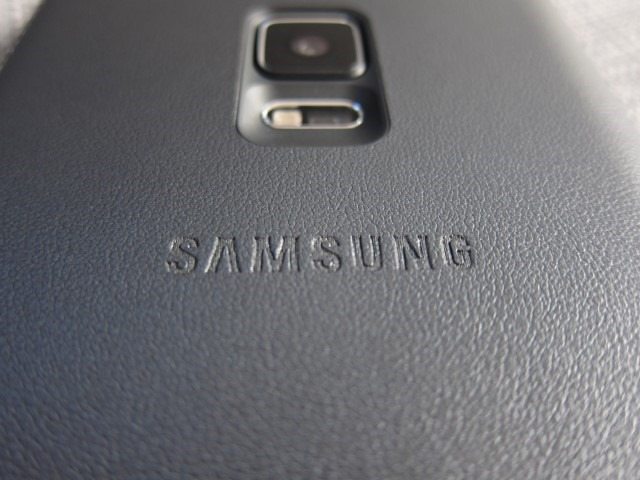 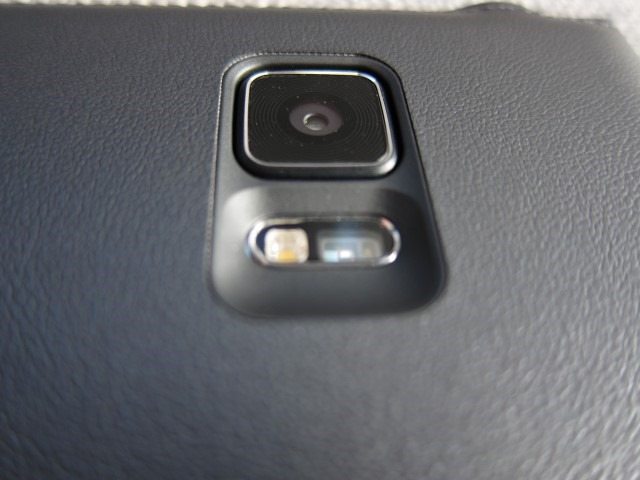 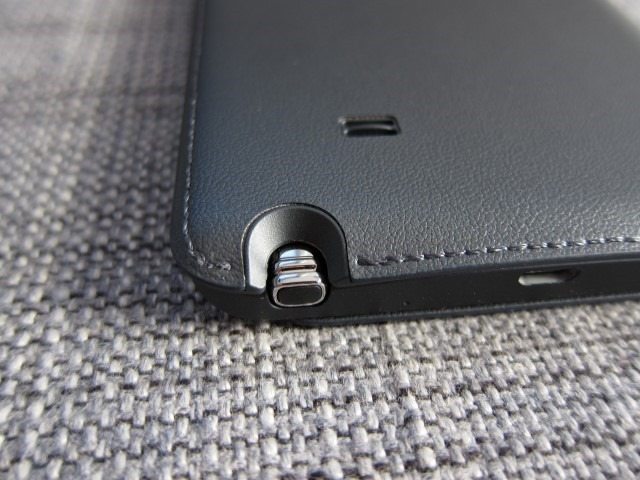 On the back there’s the Samsung logo, a raised opening for the speaker and the camera module sits slightly recessed in the case. There’s also a wide opening to allow easy access to the S View Cover. 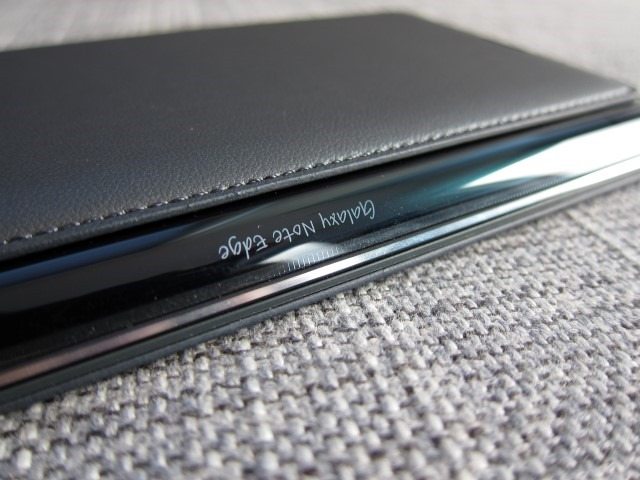 The beauty of this case lies in the fact that allows access to the edge with the case closed and allows the display to be turned on and off just by opening and closing the flap. The effect is similar to the S View Cover, but on the side, all squeezed in a mall strip.

In the end, the reason you’d buy the Note Edge, is because it’s unique and expensive. The same can be said about the case: it’s unique and eye-catching and doesn’t come cheap. It’s basically your only option when it comes to an official Samsung case, but just make sure you don’t drop your device as it doesn’t really offer any protection to the curved display. It gets an 8.9 out of 10.

Material is tougher than leather

One of the best looking cases on the market

No protection for the curved display 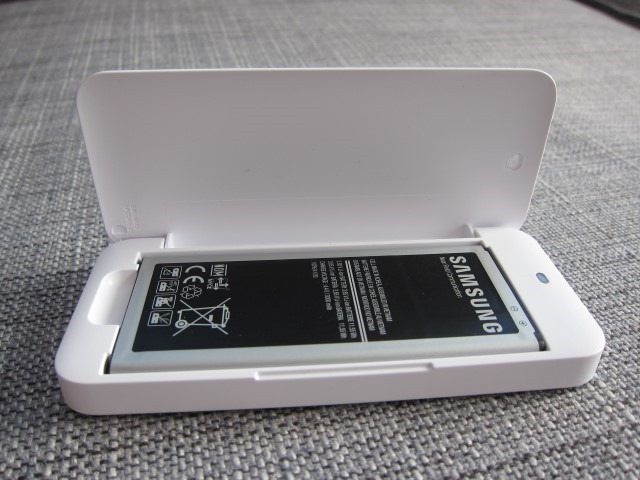 With many devices now dropping the ability to change the battery, having this features is only useful when you have an external battery charger. In the case of the Note Edge, it’s the Official Samsung Galaxy Note Edge Extra Battery Kit. It includes the charger itself, a standard Note Ege 3000 mAh battery and an extremely handy clear plastic battery holder, but not cable or charger. The idea is that you use the phone’s charger, all while they can keep the price low. The inclusion of clear battery holder that’s even more compact and protects the extra battery from the elements. 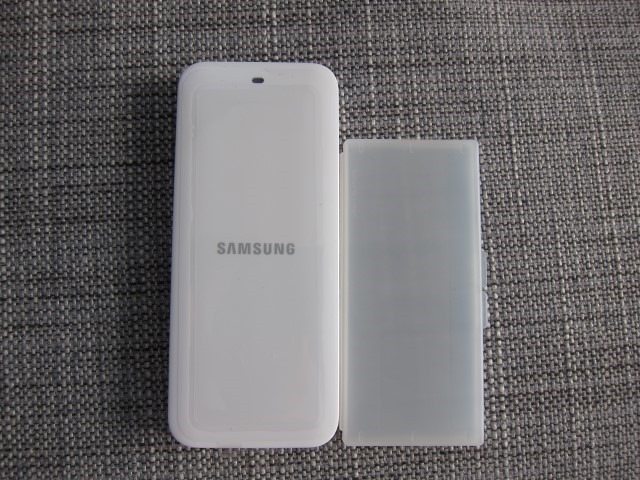 It looks exactly like the version for the Note 4, but just slightly smaller to accommodate the smaller battery. 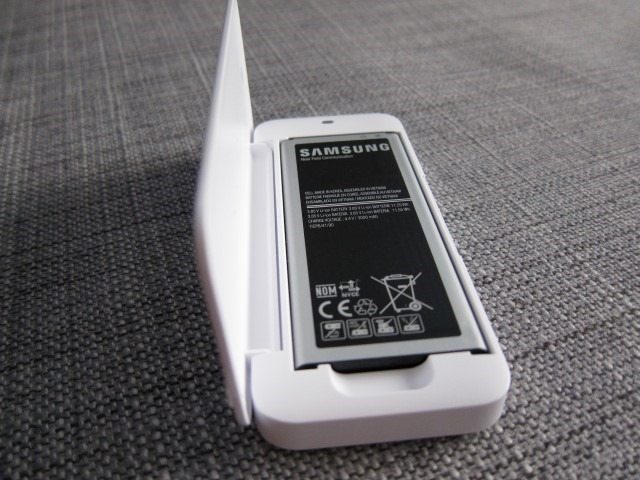 Design wise, the accessory has an all-White glossy finish with the usual Grey Samsung logo. Its square profile and lines clearly shows it’s a Note accessory. On the top we also find the LED light that flashes RED, Green and then Orange when you first plug it in. If the battery is empty it will turn RED and when the battery has been fully charged it turns Green. The flap is opens sideways and opens up from the left side. This lid can open a bit more than 90 degrees and will stay opened at any angle. When closed it doesn’t click or lock into place but no matter what I did I couldn’t get to accidently open which is a quite reassuring thought that your battery won’t fall out accidently. There’s a very thin seem that makes the flap easy to open, but when closed the unit is completely sealed from dust and sand. On the inside a small grooves help in getting the battery out. All certifications, warning and other specs have been placed inside the charger, underneath the battery instead of the usual position underneath the unit. 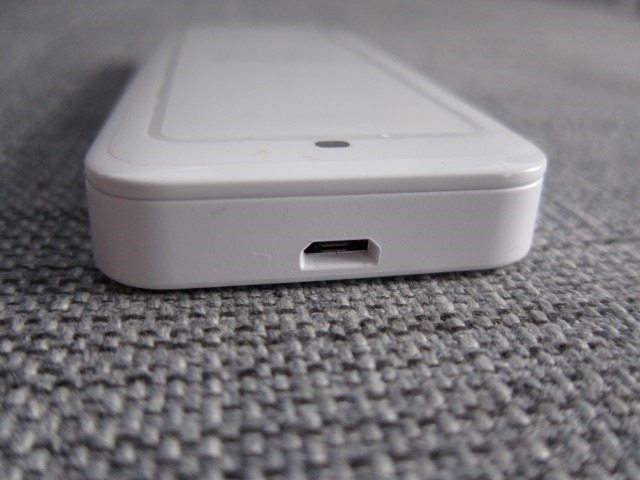 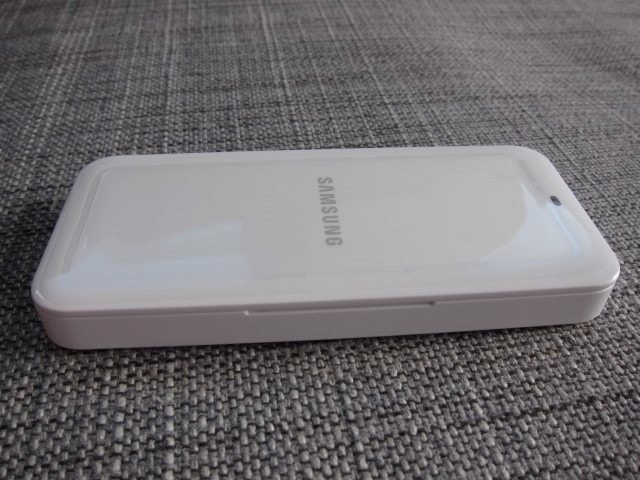 The usual routine is basically having to connect your phone to the charger to a wall outlet which aren’t always located in the most convenient locations. Charging my phone at night also meant it would remain mostly fully charged and still charging, which I’m not sure is good for the battery and definitely wastes energy. If I didn’t, sometimes I would have an empty or not fully charged device in the morning. One of the rules in this universe is that your phone’s battery will probably be empty when you need it the most. The Galaxy Note 3 Extra Battery Kit basically solves all of these problems as I always have an extra, fully charged battery whenever I need it. And it’s a matter of just swapping batteries and you’re ready to go. This didn’t only mean that I don’t have to leave my device in some corner while charging, but also means that I don’t have a fully charged phone “overcharging” all night long. Which must be good for the battery and doesn’t waste energy. 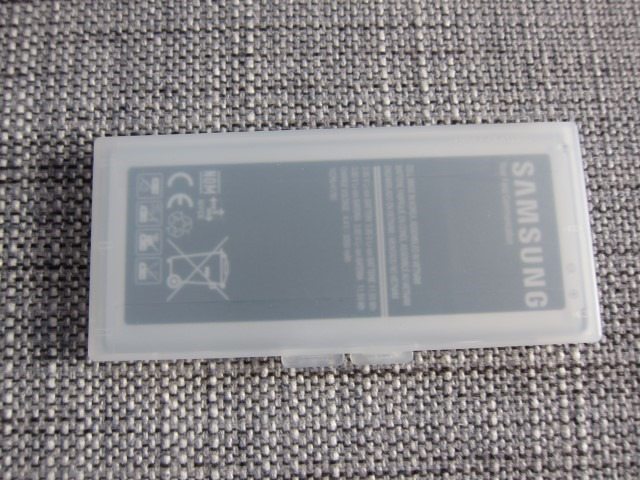 Lastly, when the battery is in the charger it doesn’t have a phone with Wi-Fi and Bluetooth to power, allowing it to charge even faster than when in the phone, given you use the Note 3’s supplied 5.3V 2A charger.

If can only get one accessory other than a case for the Note Edge, this should be it. Basically this accessory is a must and gets a perfect 10 out of 10.