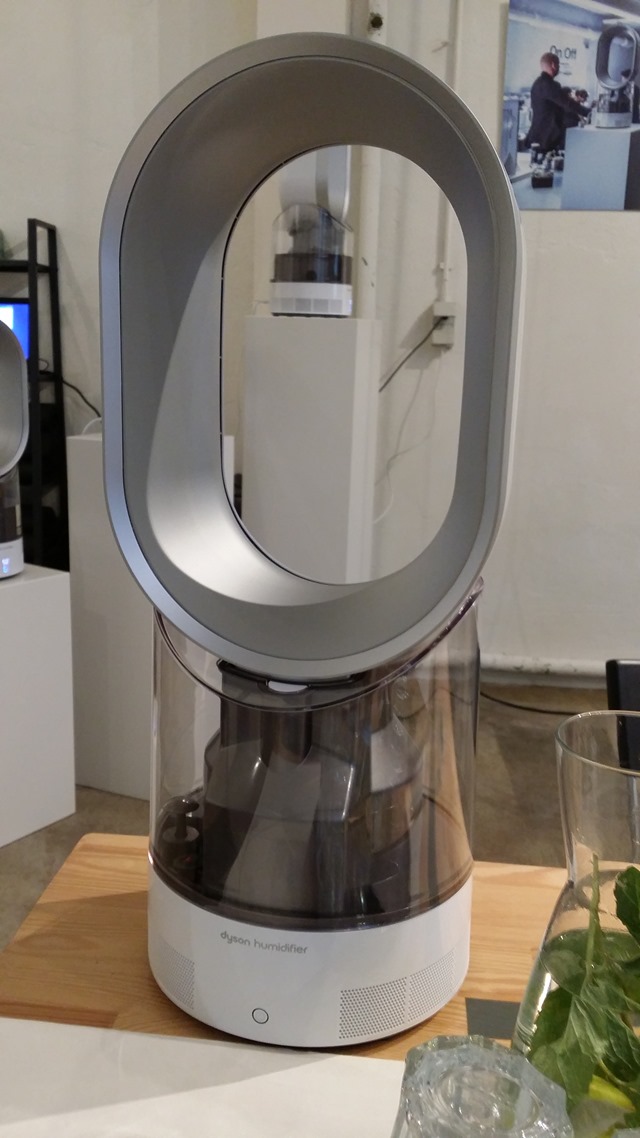 First look: the Dyson Humidifier AM10

During a launch event held today in the heart of Amsterdam, Dyson showed of its latest product: a hybrid between a fan and humidifier named the Dyson Humidifier AM10. A hybrid because it’s first and foremost a humidifier (hence the “Humidifier” name), but with a twist of course, as they’ve managed to cram it into a Dyson fan, giving you in fact two products in one. A quick look at the AM10 and you just might mistake it for the AM09 hot and cold, albeit slightly redesigned, wider and with a see-through base. It’s especially this see-through base that reveals that the nature of this product is totally different from what we’ve seen in the past. 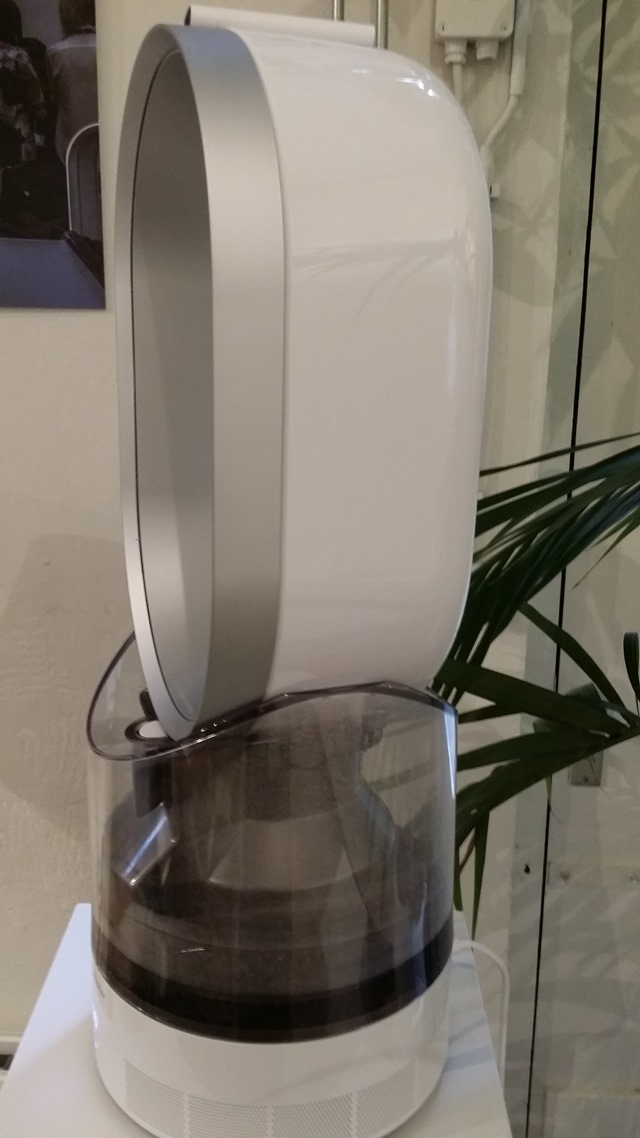 In typical Dyson fashion, the idea was to rethink and perfect an existing concept and in this case the target was the good ol’ humidifier. The Dyson engineer elaborated on their need to eliminate the disadvantages of current humidifiers found on the market today. Basically, they can be divided into evaporators, hot steam systems and cool mist-based units. The first category has the drawback of having bacteria build-up in the unit itself, while steam systems are known to consume a lot of energy and lastly cold mist humidifiers are known to introduce bacteria into the air itself. 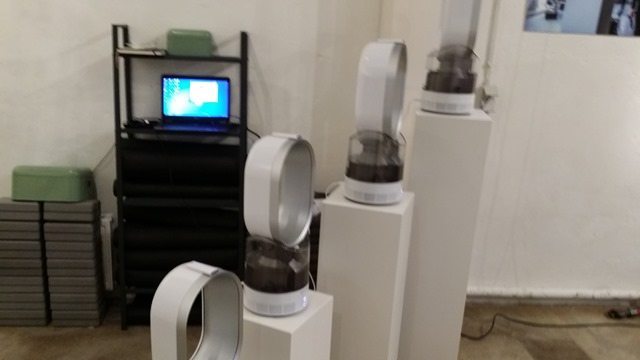 So how does it work? Dyson’s approach consists of three key parts: passing regular tap water through an extremely intense UV light, a simple yet effect way of killing bacteria, a piezo vibrates at an incredible rate breaking the water up into a fine mist, all while using very little power, way less than steam-based systems. Finally, they’ve used Dyson’s own bladeless fan design to spread that mist into the surrounding space. The end result is very energy efficient. Because this system is free of sponges or other moisture containing materials and because all parts are cleanable, bacteria can be prevented. While the engineer admitted that scale build-up will eventually happen, the AM10 can be dissembled completely and cleaned. 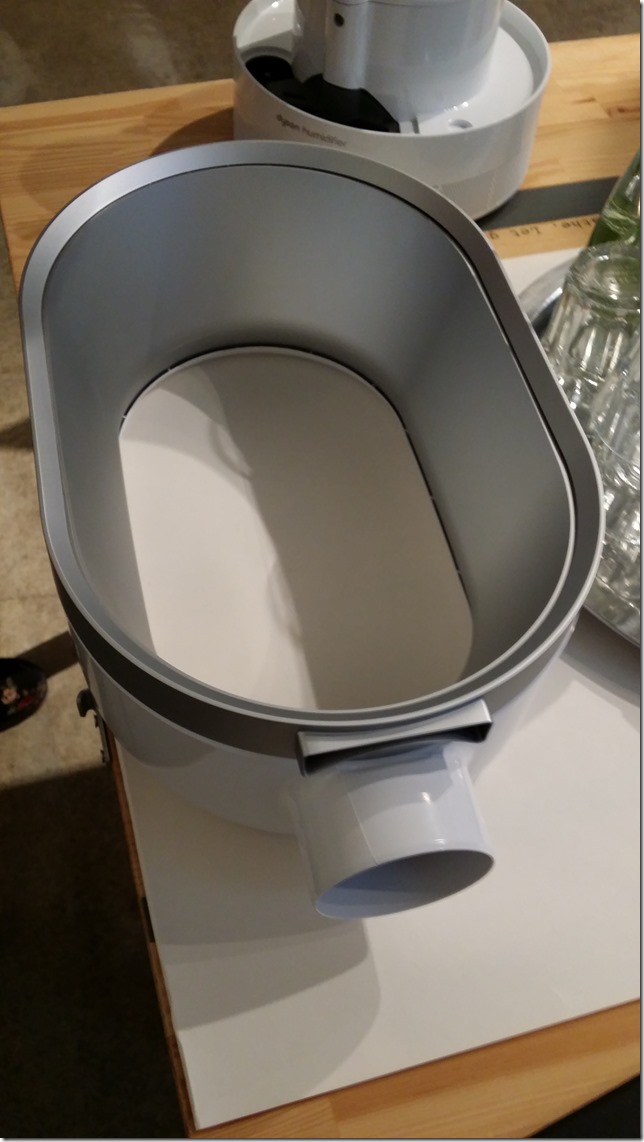 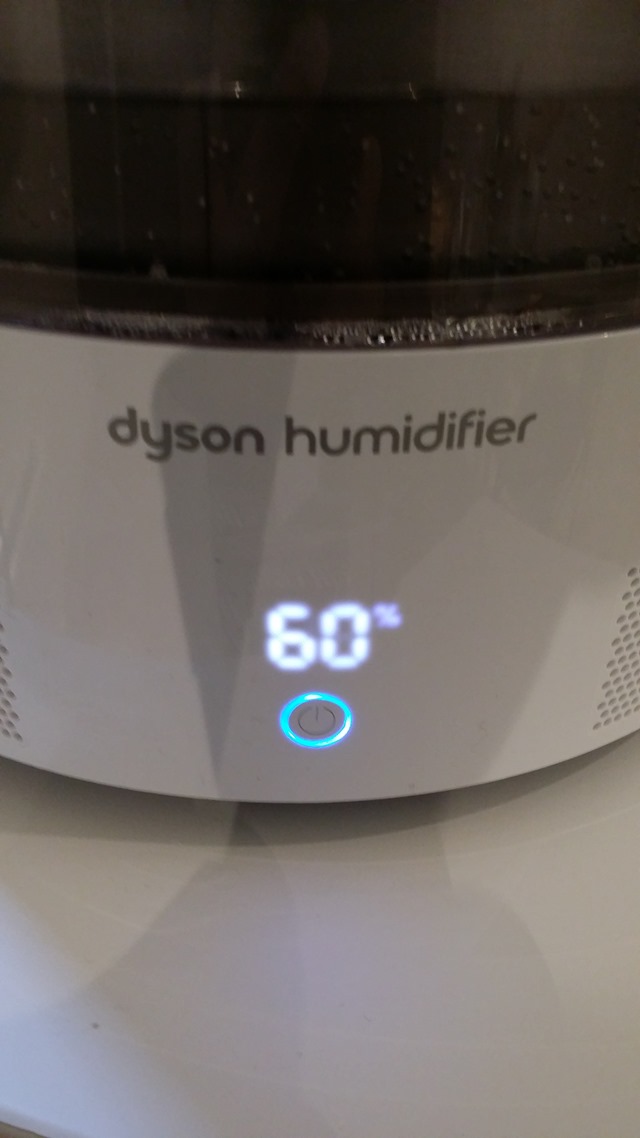 The unit itself looks like the AM09/05 Hot + Cool system with a wider base and a more bulbous and broader loop that isn’t completely round like the AM06. Overall it’s small compared to the tower or pedestal fans, about the size of an AM06 and AM09. We do wish Dyson could have implemented a larger version in a pedestal or tower fan for larger rooms. The design keeps the same Dyson DNA we’ve seen in the past with clean and crisper lines that are dictated by function and a very iconic silhouette, but are given a slightly more modern refresh that seems to indicate a new direction Dyson is going with its design language. Unlike other Dyson fans, including the hot and cold units, I was surprised to see how the entire unit was easily able to come apart, making cleanup a breeze, something I wish previous units had. This is something they should implement on all fans going forward. I also loved the fact that the base is see through, giving the unit a fresh modern look and obviously allows you to see how much water is left. 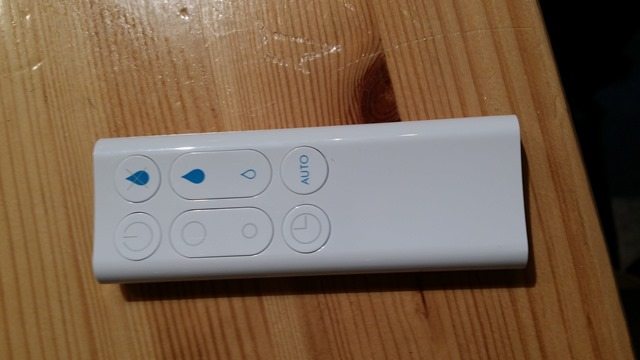 Included was the usual remote we’ve come to expect from Dyson, but instead of just fan speed or temperature, it now controls humidity and fan speed, with the remote sporting a glossier finish. 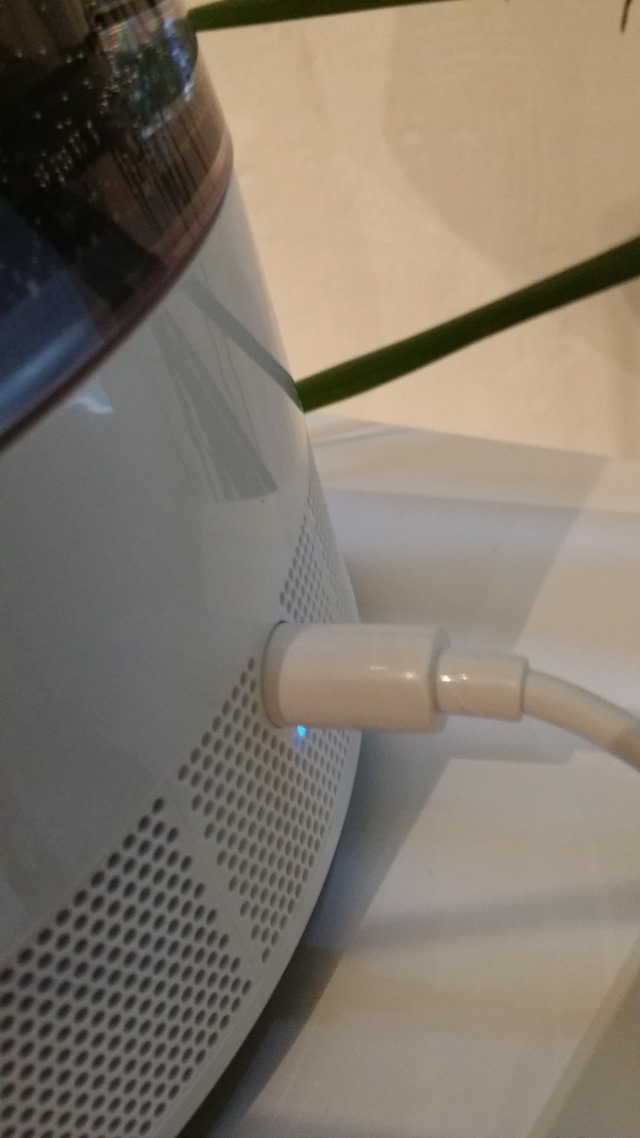 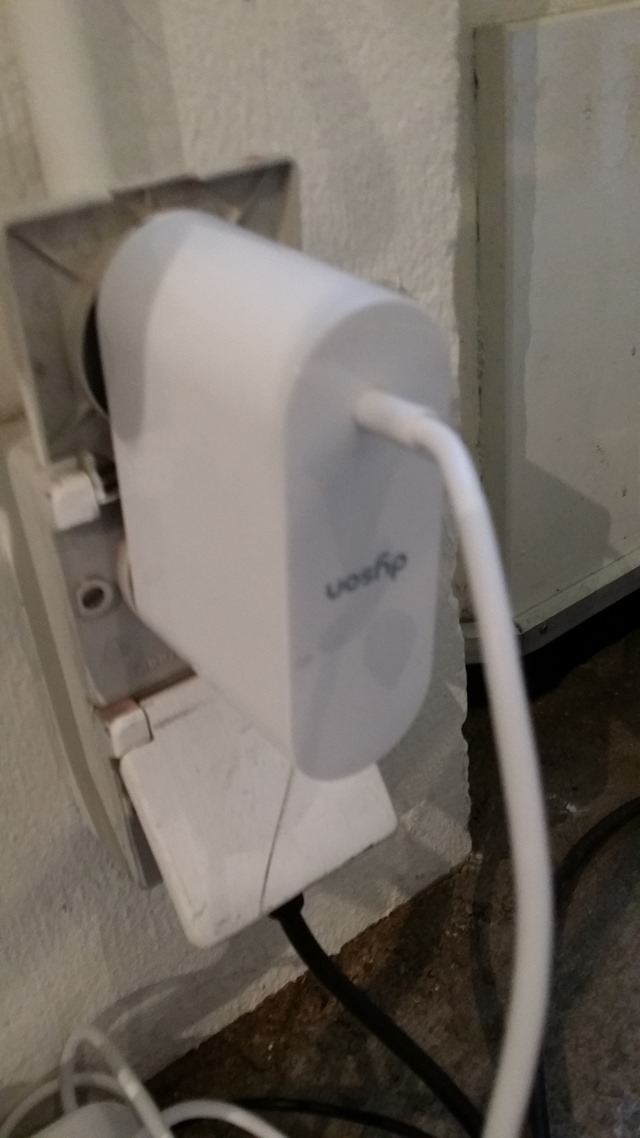 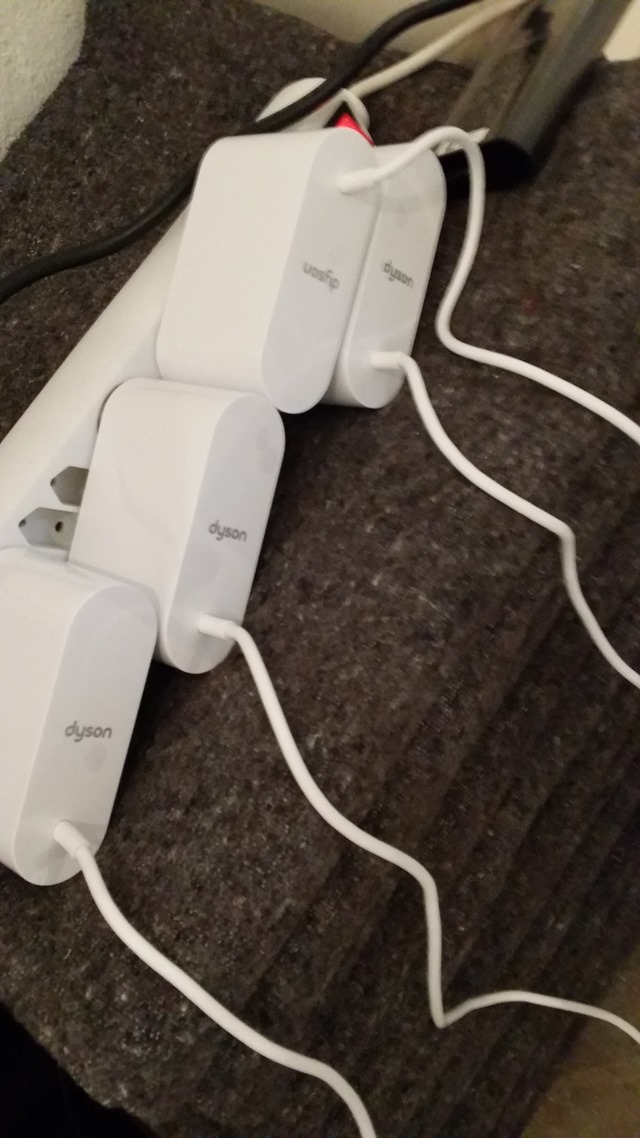 While other Dysons fans before the AM010 had a non-removable cord with all electronics built-in, the AM10 has gone a different route with a removable cable and AC adapter which pushes a part of the electronics outside of the unit, probably to make way for the 3 liter water tank. Personally I love this change, as a new wall adapter could easily be purchased and replaced in the case it gets damaged. On the other hand, the adapter is on the larger side and will take a lot of space which could be an issue for some. We kind of wished they made the adapter a bit smaller, but at least it looks quite stylish. Looks like wall art. 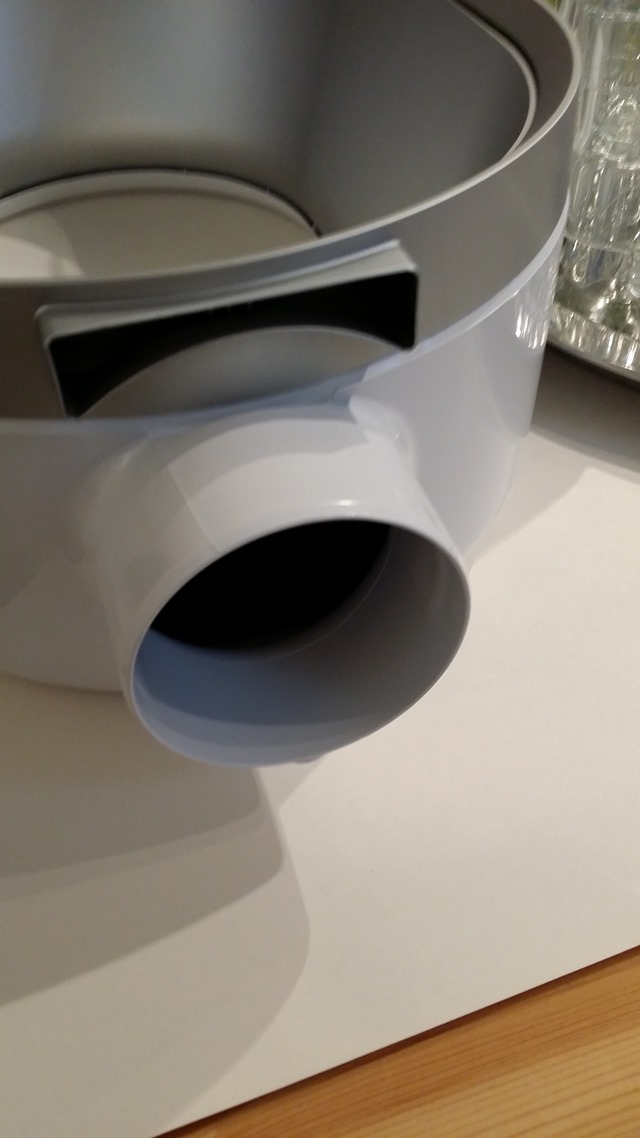 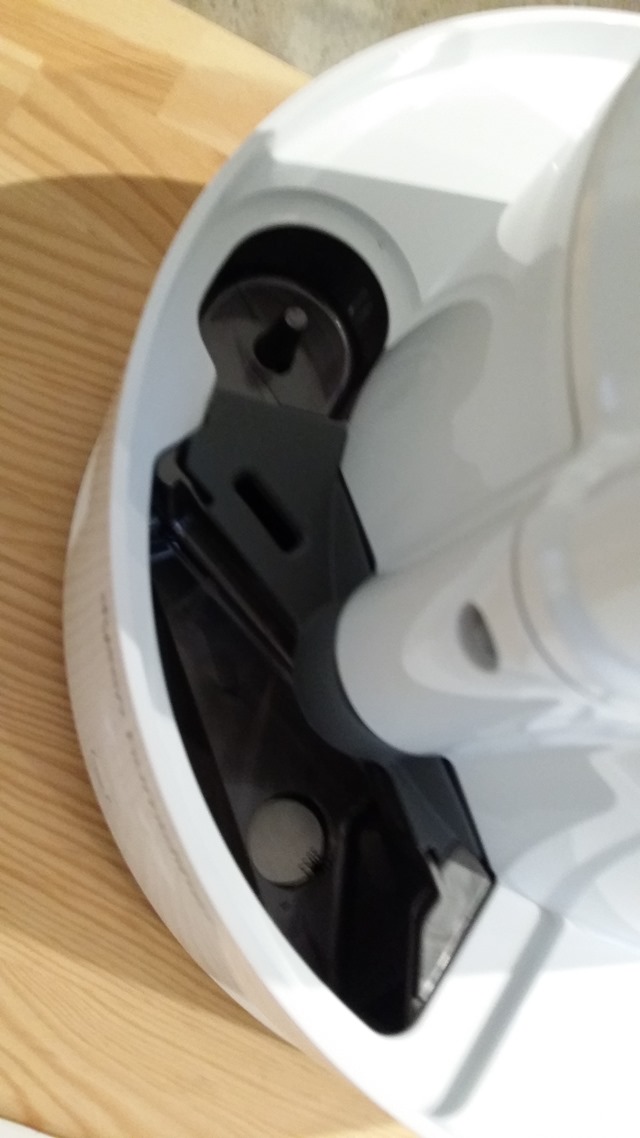 Another interesting fact is that unit will require at least 3 minutes before it starts pushing out humidity in the air, basically the time needed to pass the UV light over the water reservoir and for the piezo to start doing its magic. Like previous Dyson fans, the unit will turn off or at least stop the process when it tips over.

On display there were more than 5 fans and depending on the humidity setting, you could actually see a light mist coming out of the unit. On units with different settings, the mist wasn’t visible at all. The engineer was keen to point out that unit has passed the Quiet Mark certification, in fact it’s one of many Dyson fans to do so. But AM10 seemed particularly quiet, more so than previous Dyson fans. One of the first things I noticed, is how quiet the unit is when compared to the AM04 and AM02, which we’ve reviewed in the past. Once we get a review unit, I’ll be curious to see how it does at home and if it’s able to keep noise at a minimum, even while pushing air at full blast. 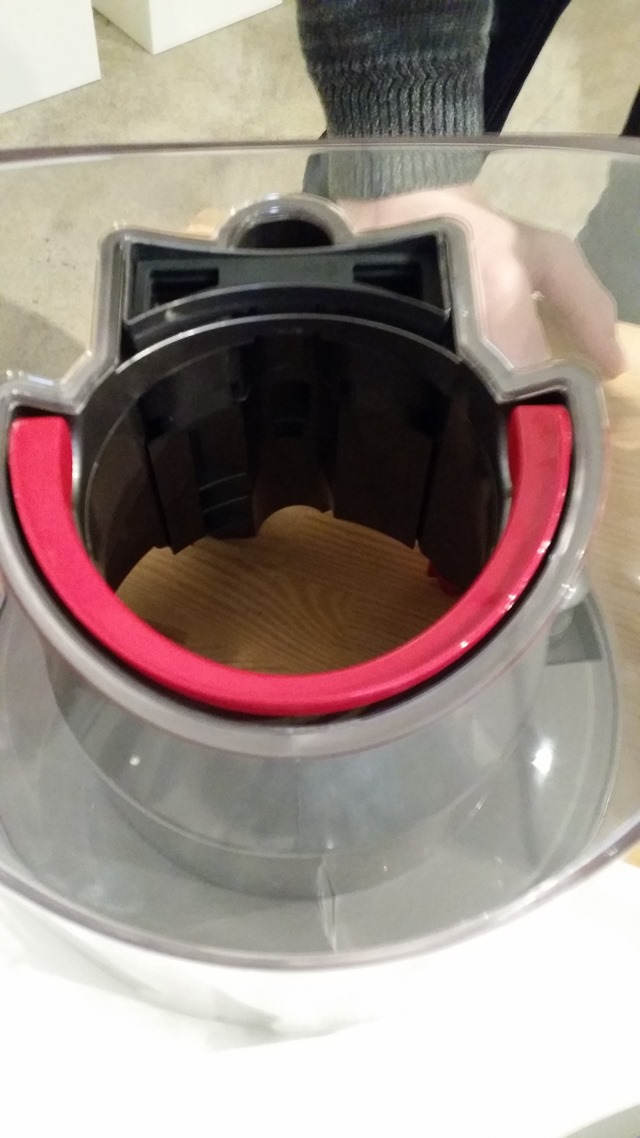 But perhaps the most intriguing part of the entire presentation, was how comfortable the air in the large space felt. I’m very sensitive to dry uncomfortable air and with a room full of AM10’s regulating the humidity, I immediately noticed how comfortable and the refreshing the environment felt, with the humidity feeling just right. Dyson had various Hygrometers spread around the space indicating a comfy 50% humidity, the secret behind why the air felt so comfortable and refreshing. Especially in the winter I tend to wake up with a very dry mouth and nose and now I’m curious to see how the Dyson will fair and if it will make a noticeable difference. Judging by how the air felt, I’m very excited to see how the unit will fair at home.

Let’s talk about price, the unit comes in at a hefty 525 euros or 499 dollars. Basically making it the most expensive Dyson fan to date. Is it worth? We’ll have to see once we do an extensive review, but judging by the short time I had with the system, it is something to at least get excited about.