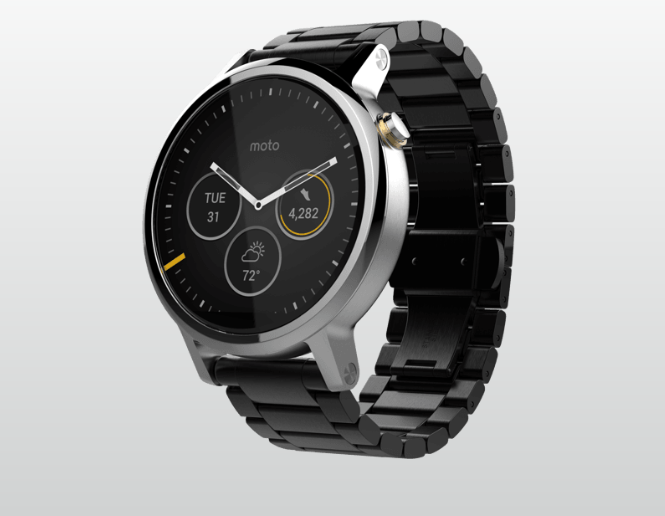 Smart watches have been slow to gain in popularity. Probably because they are known for being less than attractive, to put it nicely. When in the market for a smartwatch one would hope that, at minimum, it functions and resembles a traditional watch. Often, manufacturers of smartwatches have turned out products that look more like miniature smartphones than watches and it is understandable that people don’t wish to wear something so clunky on their wrist. Because of this, many people have been waiting for smartwatch design’s to catch up with the technology.

That is where the Motorola 360 (2015 edition) smart watch comes in to play. The company first introduced the Moto 360 to the market in 2014. It gained a lot of attention as it was the first smartwatch to have a round face and, subsequently, had a much more tradition and attractive look.

Not all that it’s cracked up to be?
The original Moto 360, however, had some drawbacks. Though the style was round-faced and attractive, it was often too big for many normal-sized wrists. Also, perhaps due to its round design, the screen was less than ideal and the battery life was not consistently dependable.

New and Improved Version
With the release of the 2015 edition, the Moto 360 has corrected many of the negatives of the first model. They now make the watch in multiple sizes to accommodate everyone’s wrist. The battery life is much improved and the new, refined design makes it more comfortable to wear all day long. Motorola has kept the slick aesthetic design of the original version which had previously garnered many fans.

Motorola has added many more features for those looking at the appearance more than the performance. The smart watch comes with a variety of different bands or straps. Also, there are more colors to choose from, such as a bezel finish.

The best part is that the overall construction is really top-notch – easily the equal of the best quality construction we’ve seen in a smartwatch.

Paying the Price for Beauty?
The newly improved edition does come with a higher price tag, however. Prices start at $299 and go up from there. For those that were expecting something closer to the original price of $249, they were left sadly mistaken. Many feel that the added benefits, however, are worth the additional cost. The new version now works with both Android smartphones and the iPhone, for instance.
The new strap mounts, which have been relocated to the outside of the watch body instead of underneath as it was in the earlier version, allows for the watch to lay nicer on the wrist. This change also makes it easier to swap out the multi-colored bands. By utilizing the quick release pins, Motorola has made it quick simple to swap out a new band. This particular feature has made the smartwatch more popular among female users. In addition to coordinating the watch to any outfit in a “snap” (no pun intended), the band size has been a hit with the ladies. The women’s model Moto 360 has a narrower band than the men’s version. This feature makes up for the fact that the women’s model is only available with a 42mm face.

How does it rate for performance?
The new Moto 360 is much more responsive than the original model. It responds quicker and easier to taps and voice commands than its predecessor. the battery was unreliable in the past, the new model has no problem lasting an entire day away from its wireless charger. The new version still requires a nightly charge to be ready for the next morning, however, the situation is much improved in this new version. If you are able to purchase the larger model and wear it comfortably, Motorola promises you an even longer battery life – up to two days in our experience!.

Since Motorola added more pixels to the new version, the display is significantly sharper. It is a nice way to view the new faces that Motorola has introduced. There are tappable widgets that display weather, step count, battery, day and date. By tapping a widget, you are able to get more information – like an upcoming look at your daily appointments. This is a great feature viewed nicely on a clear watch face.

Final Thoughts
There are so many choices to make the Moto 360 a “personal” watch for you. With the choice of finish, color or band, etc. there are over 300 different combinations available through the Moto Maker website. With so many improvements on design and function, the Moto 300 (2015 edition) is clearly one of the most customizable smartwatches on the market. The many improvements in quality over the first edition are, simply put, second to none.