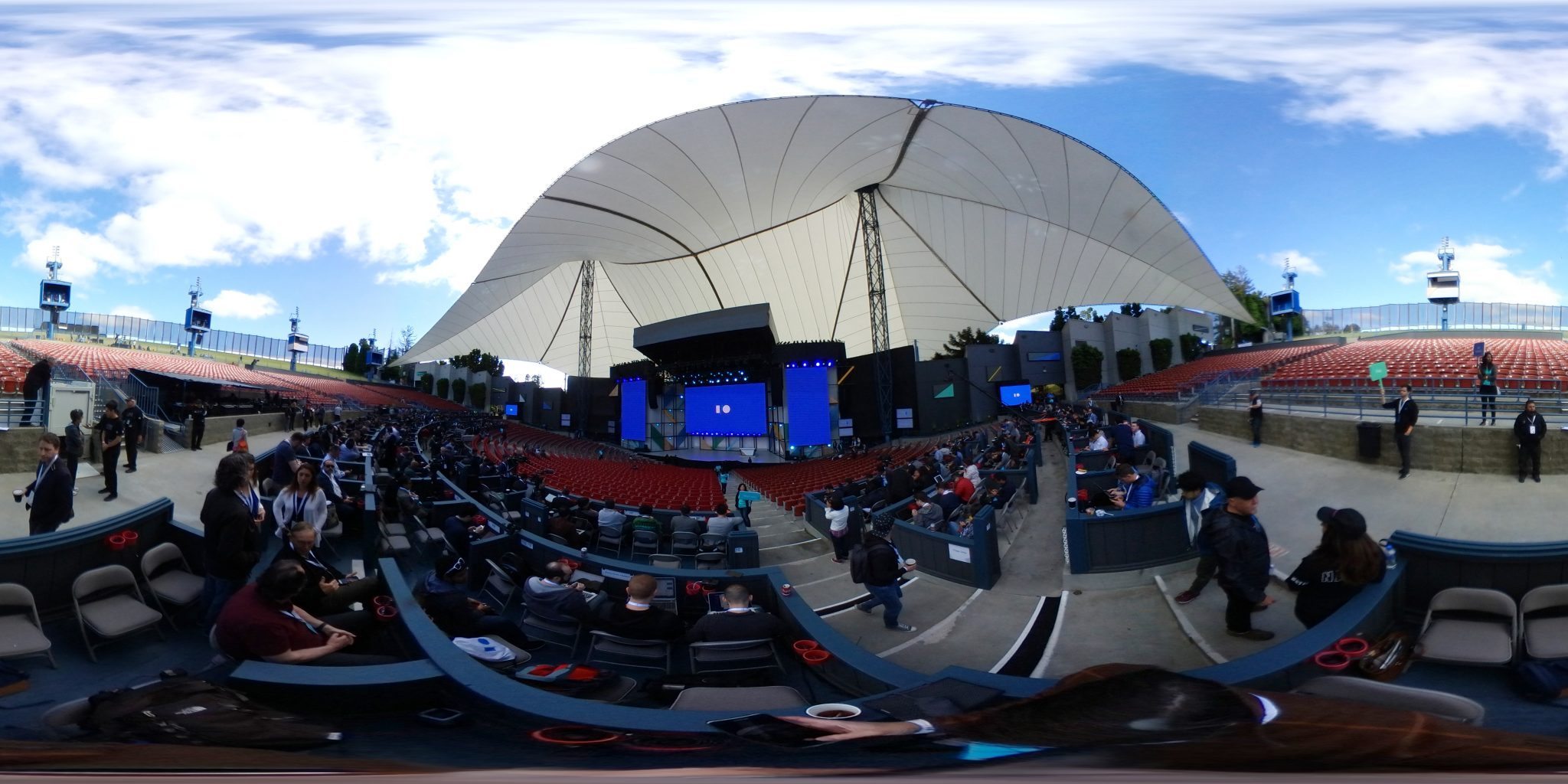 The Keynote for Google I/O 2017 starts in about an hour, and the venue is already starting to fill. 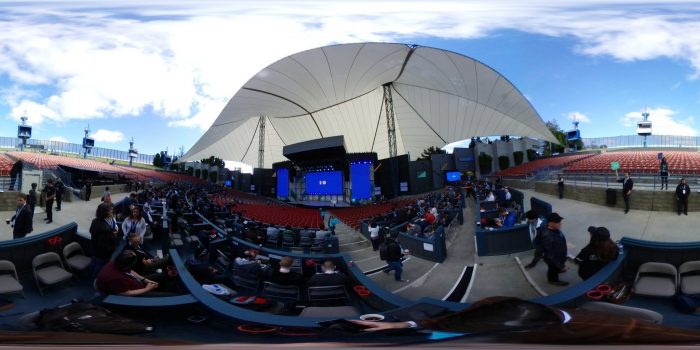 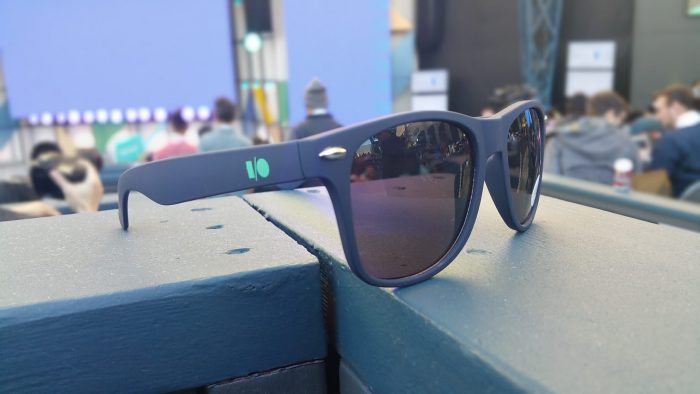 09:25 AM – A pair of DJs are playing electronica on Android connected touchpads. 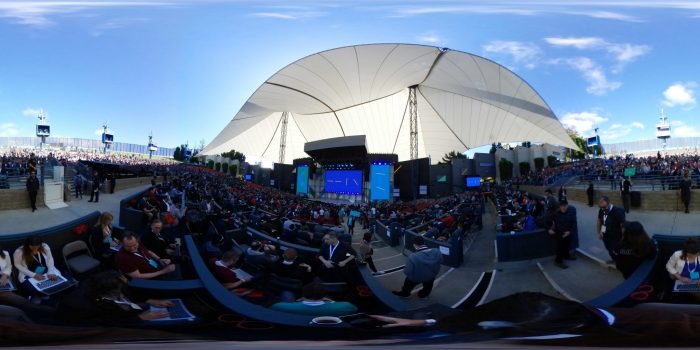 The I/O 2017 Keynote is starting. A nifty animation is playing on the big screens. The venue is packed. The crowd is amped. Google CEO Sundar Pichai has taken the stage… 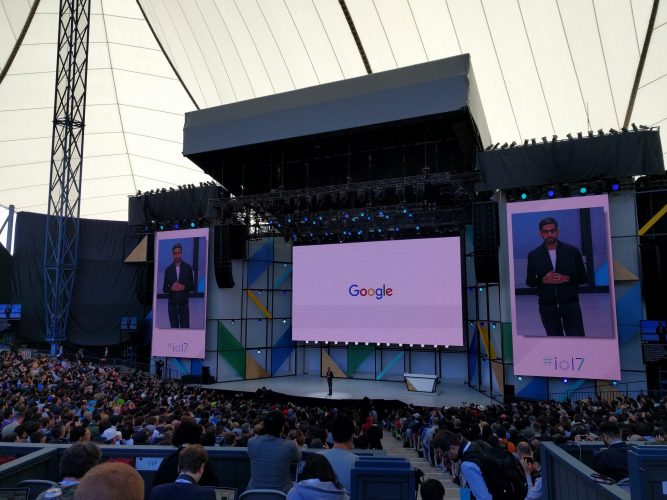 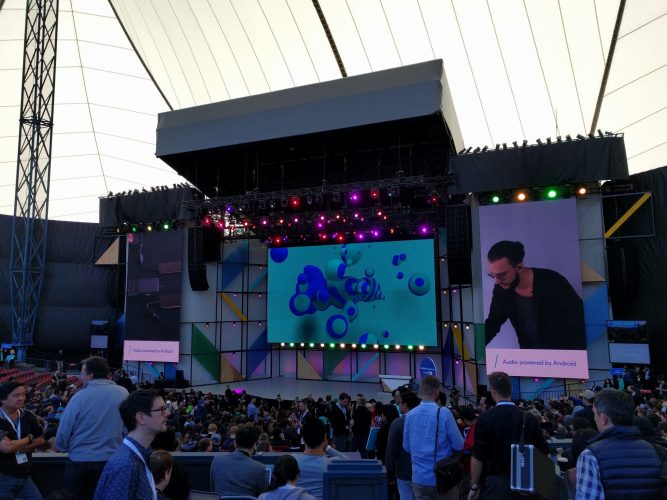 Google Lens – Vision based computing capabilities, coming first to Google Assistant and Photos. Will recognize objects and automatically OCR letters and numbers. This will also function with videos.

Cloud TPU (Tensor Processing Unit) is the next version of Tensor. These are available on Google Compute starting today.

Sundar is leaving the stage. A video showing the power of Google Assistant is now playing. 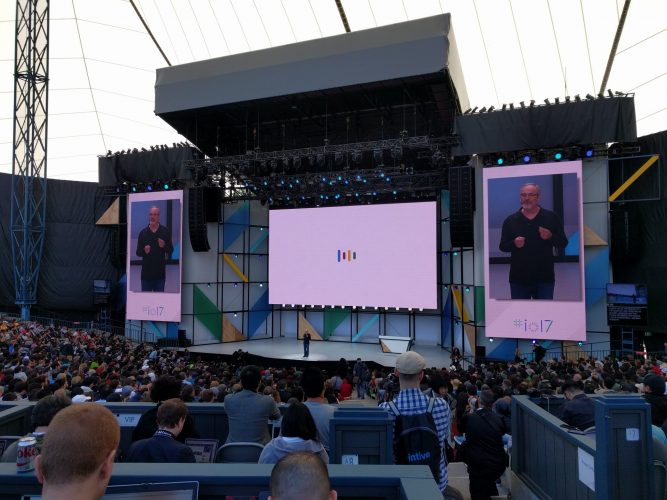 Google assistant can now be typed to.

Google Lens with Assistant can answer questions based on photos.

Google Assistant is now available on the iPhone.

The next presenter is discussing “Actions on Google”. These formerly Google Home exclusive features will now be available on Android Phones and iPhones.

Assistant will now provide the ability to purchase items via voice. The demo was flawless, and she ordered a complex item from Panera. It will be interesting to see how well this works in practice. 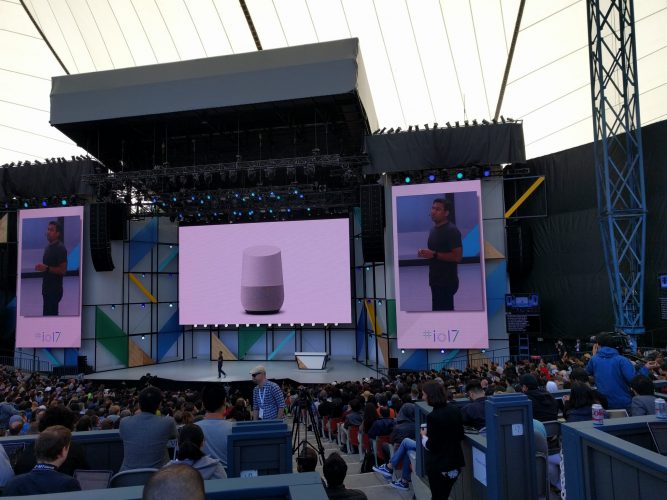 Rishi Chandra has taken the stage to talk about Google Home.

Hands Free Calling is coming to Google Home. Any landline or cell in the US or Canada can be called for free! This really steps on Amazon’s recent Alexa-to-Alexa calling feature. The Echo can’t call phone lines, only other Echos.

Spotify, Soundcloud, and Deezer will now be supported within Home and Assistant.

ChromeCast – Integration with Google Home and Assistant. Visual information will be displayed on a ChromeCast device when a voice question is asked of either.

Ask Assistant or Home about the weather, and a weather report will display on a ChromeCast equipped TV.

They’re showing a cross promotion with the Modern Family TV show. The characters control the lights and TV with Google Home. 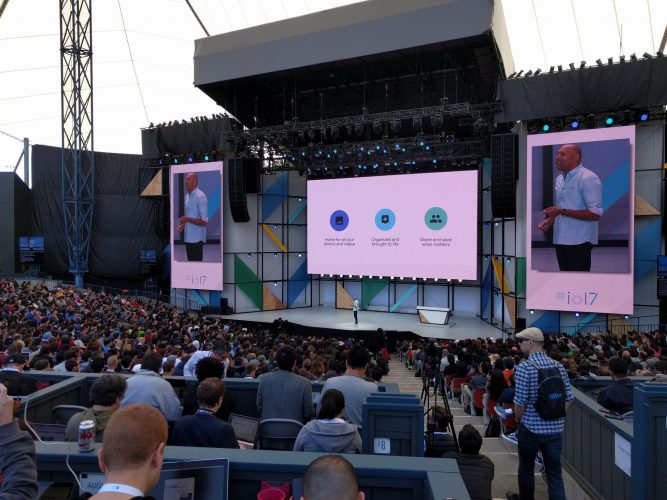 Anil Sabharwal takes the stage to talk about Google Photos.

Suggested Sharing – Google Photos is improving the ease of photo sharing. This will remind users which photos to share, and with whom.

Seems they’re using facial recognition and some sort of quality metrics to determine the best photos, and who is present in each photo.

Shared Libraries allow AI selective photo sharing. Only photos containing certain people will be shared with whomever the user selects. So every photo of the kids could automatically be sent to Nana.

He’s put a standee of his children on the stage, as they’re in school.

Google Photos recognized that the subjects were his kids, and automatically sent the photo to his wife.

These features will be rolling out in coming weeks.

Photo Books – Yes, the same physical photo books that have long been standard items from drug stores and Costco.

As anyone who’s made a photo book knows, it can take hours. Google Photos claims it will use Machine Learning to automatically create tailored photo books.

Moms everywhere will love this.

Google Lens – It can analyze photos that have previously been taken and identify landmarks, OCR text, and make images of phone number clickable for calling. 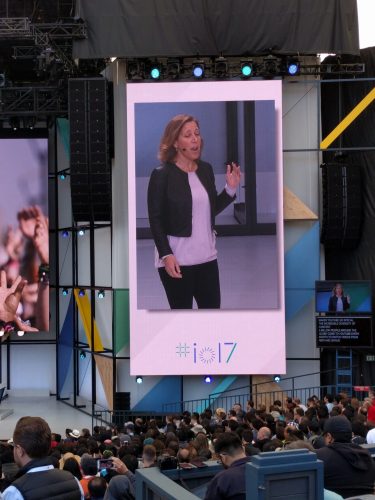 Susan Wojcicki has taken the stage to talk about Youtube.

1 Billion Hours of Youtube videos are being watched each day.

A heartwarming story about how Youtube connected designers and 3D printing to make prosthetic limbs for children around the world. 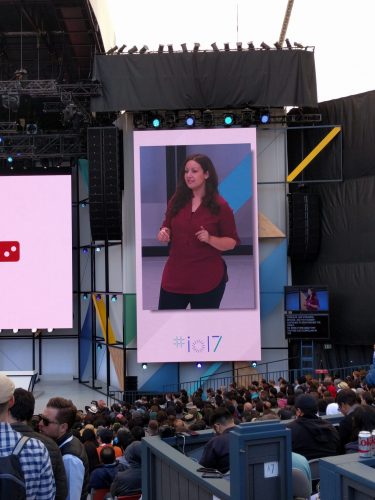 360 Videos are coming to the living room through Youtube, using a TV remote to pan through images and video. 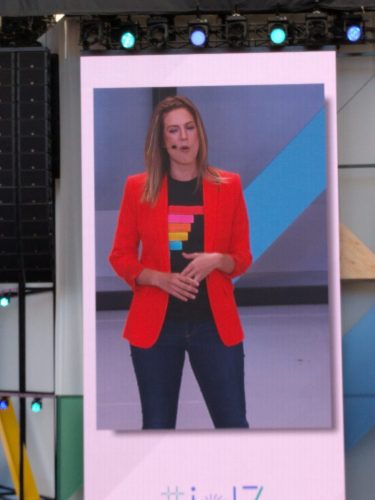 Barbara Macdonald is on stage to talk about Super Chat

The Slo Mo Guys are in the amphitheater.

SuperChat allows message positioning to be purchased. Is this an alternative to Patreon?

A favored Youtube channel developer could be sent a SuperChat for $, thus gaining the message prominence and directly interacting with the Youtube creator. 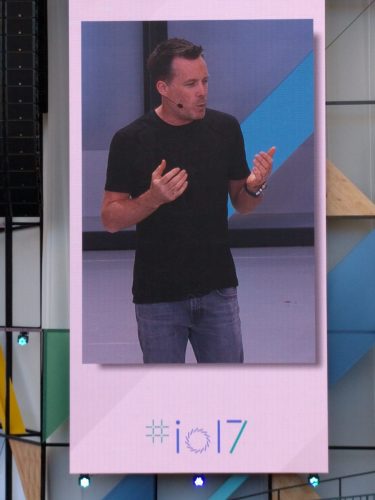 Dave Burke is on stage to talk about… ANDROID – The crowd goes wild!

A nice video is shown, celebrating the massive 2 billion Android devices out there.

Picture-in-picture multi-window video. This is a feature that has been on various Android devices for some years, but now is available throughout the platform.

This will be coming to Android O. No hints that they’re going to name it Android Oreo, though there were packages of Oreos in the press center.

Copy and Paste has been improved. Address and phone numbers are fully selected at a single click.

This AI all happens on the device, no network connected needed.

TensorFlow Lite – a library for apps today, but he suggests some Tensor unit will eventually be standard on mobile devices. 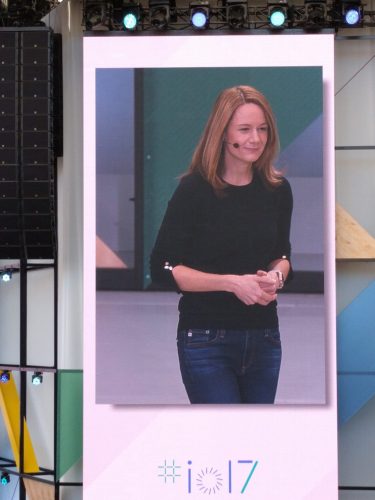 r reporting has been added to Android Studio.

Android gets a new programming language. Kotlin. The crowd is overwhelmingly happy. Well, this is a developer’s conference! 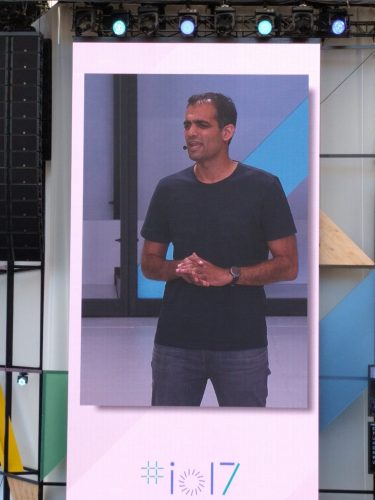 These devices should require only 1gb of memory, but as little as 512mb of RAM.

Better user control over data use. Chrome data saver on by default.

Youtube Go – Gives sneak peeks of videos, see up-front how much data will be used in order to watch a video. Peer-to-peer sharing will allow users to share videos with other users (over wifi) without the 2nd user needing to use mobile data.

Android Go play store has a program called Building for billions (the next billion users). sub 10MB APK size, better battery and memory performance. Soon, every Android device will have a “Go” configuration.

Samsung’s Galaxy S8 and S8+ will receive a software update to support Daydream – coming this summer.

Augmented Reality is suggested, but no live demo is shown.

HTC will be creating one of the first standalone headsets.

Lenovo will be developing another.

Augmented Reality – The 2nd generation of Tango phones will go on sale this summer from Asus.

VPS – Visual Positioning Service – Will identify a location by visual cues. They demo using a phone’s camera to lead a user to a specific item on a shelf in Lowes.

This can be done inside buildings, where GPS is often not available.

A video is showing augmented reality on phones. 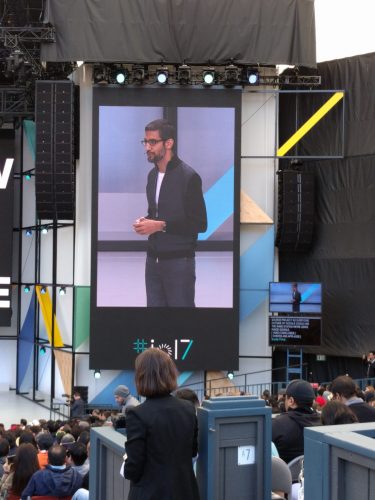 Sundar is about to take the stage again.

Sundar cues a video of a 17 year old high school student that taught himself machine learning to detect breast cancer.

Sundar announces Google for Jobs – a machine learning effort to better connect employers to prospective employees. Jobs can be filtered with factors like commute times. This search service will be rolled out in the US in the coming weeks.

Sundar closes out the keynote. Thanks everyone.