When shopping for a portable power supply, one must really only ask themselves some questions. How portable is it? Does it have enough power to do the job I need it for? Do I need to charge multiple items? There are questions, of course, about price, durability, and, sometimes, longevity as well. Honestly, not every portable charger will suffice for every job. With that in mind, I’m going to see where the Shell Portable Charger Power Bank fits in. (Hint: you can’t jump off your car with it!)

Hey, it’s a valid thought; I mean it does have the Shell logo on it. I tried to look into the licensing a bit, but it looks like a partially owned subsidiary of the Shell Corporation. Whether it’s a real subsidiary or not may only be a matter of branding; however, the product does stand on it’s own. This power bank has some worthwhile features for it’s price point. Starting at the most obvious, but seemingly irrelevant one,  the color. I know, I know. It’s a color. What follows is that it supports a few different connections, and can charge multiple devices. Then finally, there is the service life of a charge, and how long it takes to charge. I like reviewing two kinds of things, something that blows me away, and things that catch me with the cost/value. This one really hits on that latter desire. This is not a show-off item, but it’s not a budget-buster. In the case of a power bank, I’d prefer to have a budget minded option anyway.

You know, I wouldn’t think that an objects color would end up being a real selling point for something as simple as a power bank. Right? I mean this is something that will live in a glove-box, a purse, or a knapsack. It’s an emergency power supply, not a display piece. Then my wife left her phone at work – for two days. She shoved the power bank in her purse on the third day to charge her phone (once she got to her job). Upon her return, she opened her purse; then, it dawned on me. That gaudy white and yellow color scheme stood out like a sore thumb. This thing is super easy to find, even in that cluttered abyss that is my wife’s purse. You win Shell. Color IS IMPORTANT. 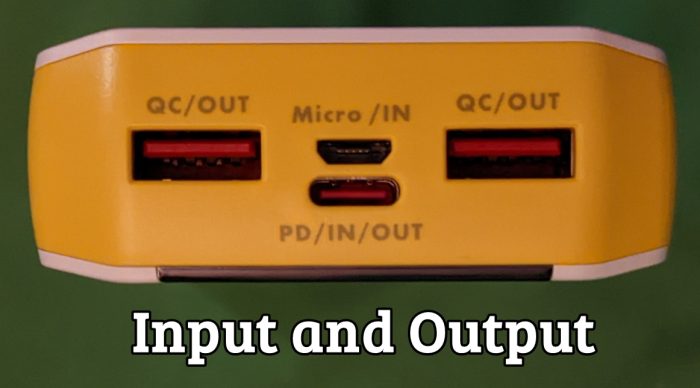 Be that as it may, the real nitty-gritty is in the usefulness of the tool, and at it’s core that’s what a power bank is. It is a tool to do a given job, and, in this case, it’s charging your devices. It has two USB A ports for outgoing power, a USB C port that can charge or be charged from, and, finally, a USB Micro (never-you-mind my opinion on USB Micro) for charging from as well. That last port is handier than expected, since, when traveling, access to a proper wall charger may be limited. They can be used to charge multiple devices simultaneously, so a headset and phone can be charged together (for example).

Still, a Power Bank is only as good as the charge that it holds itself.  Is it the best on the market? No, but that doesn’t stop the Shell Portable Power Bank from challenging the best in it’s price range. Keeping in mind the lower-end model is only rated at 20W, it does a fair job of charging phones, headsets, earpieces, smart watches, etc. However, due to the wattage restraint, it will not fair as well in charging things like Valve’s new Steam Deck, a Chromebook, or an Apple iPad. Does that make this a bad Power Bank? No, again this is a tool. Any tool requires that the user know what their needs are. The charging time from the device is acceptable, but it will not perform miracles. What it does is charge your other devices in an acceptable amount of time without breaking your wallet to do so.

Finally, I really only have one actual complaint, and that is the Shell Power Bank does not ship with it’s own power source.* While it does ship with a short USB C cable, the lack of it’s own wall adapter is an annoyance. Yes, I realize that even phones aren’t shipping with those anymore (I’m looking at you Apple), but expecting customers to have the correctly specified adapter is a recipe for returns. While this did not adversely affect me in any way, I can certainly see where this could create issues.

The Shell Power Adapter is a good buy for the money, and is easily found from the Shell Store on Amazon. The unit is often advertised with a discount, and is easily one of the better budget chargers. The color may not be what is expected from a modern device, it does serve a helpful purpose. It has plenty of charging ports, and holds enough charge, itself, to manage a couple of charging sessions. Overall, this is a good buy for anyone on a budget. 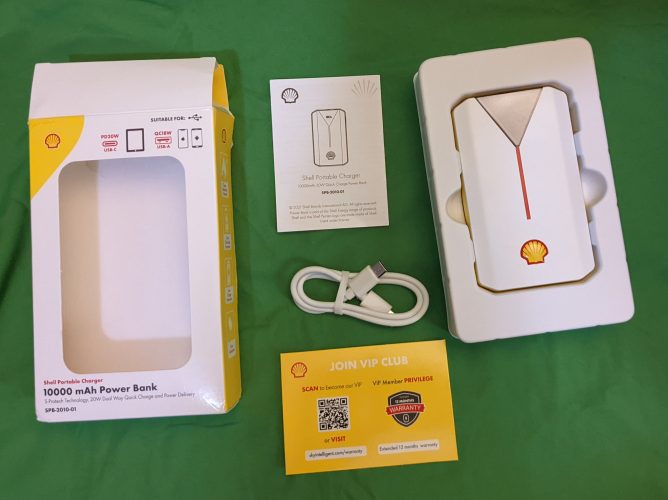 Cost as of Writing: