Introduction: Who is Poly?

Hold up, I know what you’re thinking, “who the heck is this? Is this another Chinese firm selling another copy of something on Amazon or Ebay?” The answer is, “no.” The history of the company in question is a little complicated, but this webcam is anything but. Poly is the former Plantronics.  Yes, that Plantronics, the American company known for high quality communication devices. Their early headsets were used by airlines, NASA, and they invented the infrared “echo-fee” communications. Gamers might note that it was Plantronics that worked with Microsoft to create the XBox headset in the early 2000’s. Since their acquisition of Polycom, they’ve since changed their name to Poly. Now they’ve produced a webcam under the new corporate name that outperforms devices that cost thrice as much. 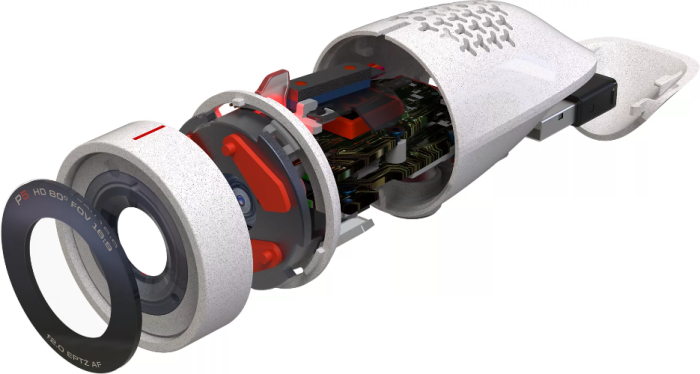 The Poly Studio P5 Professional Webcam is a 1080p webcam with a built-in directional microphone. This is pretty standard fare, but the quality of the images produced are amazingly good. Not just above average, but really amazing. In a $79.00 webcam, an amazing image is enough to set it apart. However, the Poly Studio P5 offers more than just stunning visuals. It is constructed using modern polymers, so that it travels well for those conventions or business trips. The USB connection port can also be covered, not to protect from dust but to allow use of a pass-through USB for a headset. The device includes a monitor clamp, but that can be removed to use with a tripod (tripod not included). Finally, it has a privacy shutter, for peace of mind.

The webcam comes with Poly’s “Poly Lens Desktop App,” which has been one of the better applications that we’ve tried. They’ve somehow managed to create software with powerful controls without resorting to more tabs than a Rolodex™. Lighting, video settings, and other functions are well organized and using a modern clean interface.  Finally, the Poly Lens App can find your device for you. I lied, they also offer “health and wellness” reminders; although, I’m not sure why.

You’ll not find a better webcam under a hundred bucks. Heck, chances are you won’t find a better webcam for $300. While the software, extra USB port and rugged case are all great extras, image quality is king. Poly brings serious image quality from the Poly Studio P5 Professional Webcam. Seriously, could you expect less from the company that produced the headset used by Neil Armstrong during the first moon landing?