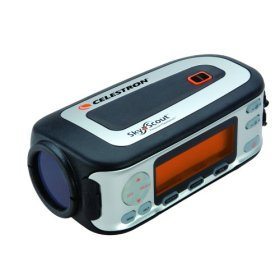 Celestron SkyScout and Tripping out in Space

I’ve always loved space and have coveted a telescope for many years. But often I just didn’t have a handy window and the space for all that gear. I have also enjoyed using astronomy programs on computers which will simulate the motions of the heavens and let you learn about various objects and planets.

The Sky Scout Personal Planetarium is a small, handheld device which is a like a telescope/computer in your pocket! Turn it on, look through one end to locate (via GPS) say, a star in the sky and within the celestial database of some 6000 stars, planets and constellations will give you all the encyclopedic audio and text info you need about it.

Like other computer astronomy programs, you have access to a compilation of facts. There’s an intro to astronomy in audio, a glossary to help you navigate the stars, and bios of historical figures. There’s a catalogue of man made space objects to familiarize yourself with the Shuttle, Hubble Space Telescope, and other important floating objects.

What makes these kinds of programs great is the ability to expand the knowledge base. Otherwise, you just have an expensive brick that will outlive it’s usefulness after a time. For this purpose the Scout has a USB port from which you can update the database as well as as firmware upgrades. There is also the ubiquitous SD card slot. Right now it’s for Sky Tour audio presentations which are optional.

The Scout comes with Earbud-style headphones which plug right into 3.5mm stereo jack. Use two AA batteries and you are good to go for about ten continuous hours. Wow, that’s sounds like you could make a whole night of it!