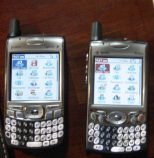 Well, it has been about 48 hours with the new Treo 700p. I have made some initial observations and I am continuing to take good notes so I can bring you a full review next week. Most of the questions I see in on-line forums tend to be about ‘what is different’ between the 700 and the 650, so I’ll try to quickly address that here.

Read on to see some more pictures (click any of the pictures for a larger view) and find out some of the answers to those questions!

Side by side comparison:

I put the Treo 650 and the 700p next to each other and took these pictures. It is hard to capture, but the 700p seems narrower to me. It also feels lighter. The specs don’t

necessarily support this – but it just ‘feels’ lighter and narrower.

You will also notice that the side buttons are different. The 650 has more of a ‘rocker’ switch for the volume. The 700p uses two smaller buttons which are separate from one another. So far, I am finding this feature to be more ‘cosmetic’ than anything else. The small button under the side button does bring up a new voice recorder feature on the 700p which is a nice touch.

What’s in the Box:


As you can see, the Treo 700p doesn’t come with much in the way of accessories. There is an application CD, a Stereo headset (why they use a min-jack that conventional headphones can’t go into is beyond me,) an AC adapter and a hotsync cable. That’s it. For $400-600, depending on service contract, I would like to see a case, a screen protector and a car charger.

All in all, I continue to be very impressed with the new Treo 700p and I will post a full review next week.