IN THE RED CORNER… Weighing in at just over four ounces, the challenger, the HTC Incredible, a.k.a. Droid Incredible.  In this generation of the cell phone wars, all phones are in contention with the eight hundred pound gorilla in the room, known as AT&T’s iPhone; enter the newest challenger, Verizon’s Droid series.  The Incredible, powered by the now beloved Android OS, comes to the ring well equipped with both features and marketability.  The feature list of the Incredible is just that, incredible.  What’s more, the sky is the limit to the word of mouth marketing surrounding this device.  In the never ending free for all of the cellular phone market, the Droid Incredible definitely comes out swinging.

Physically the Incredible is, to coin Monty Python, wafer thin; however, the bright and large screen should be the first indication that this phone isn’t skimping on any feature.  Currently, the single most important feature is the ability to download, install, and use new applications with the phone.  Yes, it does have “Apps”; it has the Droid Marketplace, and that is no small repository.  The Droid line up by Verizon are all “powered by Google,” meaning quick and easy access to your e-mail, the internet, GPS, and it’s all built-in–before you go looking for that “App.”  The phone has a great camera, built in flash for the camera, a camcorder, a voice recorder, 8GB memory (about 7GB available for recordings), WiFi, 3G, an FM radio, and the list goes on and on.  Before dropping the expected feature list on you, the dear reader, a moment must be given to the included Skype Mobile.  Verizon, oh how slick you are, having entered a contract with Skype to provide a mobile version of Skype to help reduce the cost of the international calls utilizing the built-in 3G–nice.  The Incredible stands toe to toe with Apple/AT&T’s iPhone in the feature department, and utilizing Android OS will allow the eventual surpassing of the reigning champ. 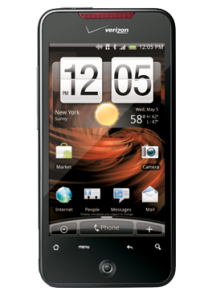 [ Features Courtesy of HTC ]
Detailed focus. With eye-popping 8-megapixel resolution and built-in editing, it’s not a camera phone. It’s an amazing camera that happens to be an amazing phone.

Built for speed.. HTC designers found inspiration for the Droid Incredible by HTC in a jet-black Italian sports car. With a blazing-fast 1GHz Snapdragon™ processor, it seems our hardware engineers did, too.

Instant sharing. Capture the moment and post it instantly on Facebook®, Flickr®, or Picasa™. Mail it, message it, or send a peep to all your peeps.

Instant apps. The Android™ OS with HTC Sense™ delivers easy access to thousands of apps and games available at the Android Market™. 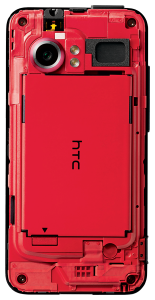 Connectivity     Bluetooth® 2.1 with FTP/OPP for file transfer, A2DP for wireless stereo headsets, and PBAP for phonebook access from the car kit

Battery     Rechargeable Lithium-ion battery
Capacity: 1300 mAh
Talk time: Up to 313 minutes
Standby time: Up to 146 hours
(The above are subject to network and phone usage.) 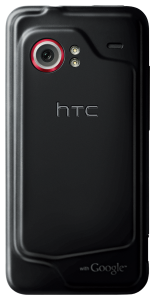 Feature after feature, and selling point after selling point mean very little if the product cannot get placed or advertised effectively.  Good thing Verizon has the marketing knowledge to get something off the ground, no matter how much you hate “Can you hear me now? Good.”  They have taken the Android OS, and made it, in the eyes of Joe Public, their own invention.  They have grabbed the reigns of the designers and steered the horse in a direction of their choosing.  Honestly, someone at Verizon must have stayed at a Holiday Inn Express last night, because going to the length they did with Lucasfilm to secure the term “Droid,” is paying off in spades.  The case design of the phone simply screams “R2D2,“  and that is not the special edition model.  We live in an era where the “it factor” plays a major role in a cell phone purchase.  Your cell phone is almost a badge of status indication within the workplace.  Thus, when people in the office stop mentioning the eight hundred pound gorilla, and stand in awe of the challenger–your marketing team has come up with a winner.

The only flaw, if it can even be called that, is that the user will have to download VZAccess to utilize the Mobile Broadband Access as advertised with the Droid Incredible.  Keep in mind that Verizon, and every other carrier, charges a premium for this, so be aware of what is currently a nasty cost before entering any service agreements.  With that said, it is only a matter of time before the cost mobile broadband is comparable with that of DSL Service or Cable.  The speeds of transfer are already comparable if one is in the coverage area.  ( up to 1.4 Mbps for mobile broadband, and 3.0 Mbps for most DSL services)  The speed may not be what your teenager wants to download an entire discography via bit torrent, but suffices for most multiplayer online games–voice chat included.  Specifically, the Droid Incredible performs just as well as, if not superior to, the USB760 Modem (also available from Verizon).

What’s this about Froyo then?  Froyo is simply the latest version of the Android OS for Android powered devices, including the Incredible.  The big deal is performance, which was quick to begin with; now, the Incredible is a speed demon compared to many of it’s competitors.  While there isn’t a ton of graphical updates, the under-the-hood aspect has seen massive improvements.  The browser core has been enhanced for faster web browsing (namely the JavaScript engine), in excess  of twice the speed for Dalvik based applications, and improved memory management (faster switches between processes/applications).  The developer side of this update is also extensive, and results in massive improvement to all apps that run on the Android platform.  Of particular interest, is the ability of apps to “live” on an SD card (external storage) while still launching, and running on the device.  The Froyo update for Android is the big deal; the Incredible can now download, render, and display web pages faster than the iPhone (and the Incredible renders Flash Anims, the iPhone does not).

Overall, the impressions of this phone is all about incredible.  The name, Incredible, simply fits.  Yes, this phone does make one feel like it is 1999, when all your co-workers are standing in awe of your Motorola Razr.  Oh yeah, it has all the features and apps needed in today’s non-stop busy world.  Even the big boys are recognizing the importance of supporting the Android OS; heck, even FoxNews has developed an application for the Android.  The Verizon executives must be having a party, because they see the reigning champ is dazed, and the Droid line is still throwing jabs.