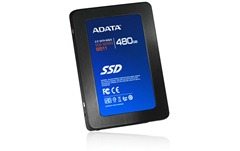 Recently I was building myself a new Windows-based computer and the ADATA people came along and offered me a review unit from their new S511 line of Solid State Drives (SSD). If you’ve never heard of an SSD think of it as a USB Flash Drive that’s enormously faster and replaces your computer’s hard drive. All the time that a hard drive takes to spin and seek to find your data is replaced with simple memory accesses in the SSD.  A typical USB Flash Drive is generally 3-4 times slower than what is available on SSDs.  A hard drive is definitely slower than a typical SSD, but is also far less expensive.

Aside from speed, SSDs also offer other advantages. They’re immune to the physical shocks and vibration that can damage a hard drive. They don’t require the same sort of cooling that a hard drive requires to prevent memory loss over time. They’re not sensitive to magnetic fields. They’re smaller. Finally they don’t suffer from the drive fragmentation issues that hard drives have over time.

In practical terms this means that the ADATA SSD is quite fast when used with a modern SATA supporting motherboard and with a street price of only $120 the ADATA is a bargain with it’s performance and specifications!

The S511 supports the TRIM command with Windows 7. Basically this means the drive can free up unused space (Free Blocks) for system writes immediately. SSD drives without this can, over time, appear to lose storage memory.  No such problem here!

All purchasers of the S511 can download the free Disk Migration Utility software. It facilitates the quick transfer of all files to the new solid state drive, significantly reducing the troublesome and time-consuming process of reinstalling software and restoring data from backups.