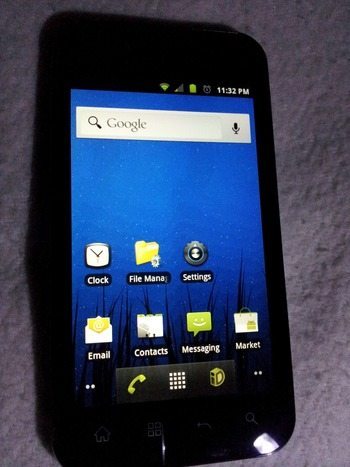 Samsung Replenish and LG Marquee Give a Boost to Sprint

LG Marquee and the Samsung Replenish both come preloaded with Mobile ID. The customer can access apps, ringtones and wallpapers. When I first turned on one of these I was able to immediately get info about the Boost phones. I downloaded the PDF User Guild from the phone and read the PDF immediately. Both phones are small, light and attractive. The LG Marquee is actually quite thin at 0.36″ or 9mm.

Samsung Replenish comes with USB cable/AC adapter and SD card adapter. Easy to use QWERTY keyboard. The 2.8-inch, 240-by-320-pixel QVGA display is hard for my older eyes to see. This will probably not matter in the least to the younger crowd. But I do find it annoying when trying to read my Facebook pages because the Facebook app does not have a zoom feature. Of course I could always get stronger glasses but that’s SO boring.

The OS is Android 2.3.6 Gingerbread and runs fine but I can tell it’s not quite as fast and responsive as other Android phones I’ve used. But it’s a dual-band EV-DO Rev 0 (800/1900 MHz) device with 802.11b/g Wi-Fi, so it’s doing it’s best. The sound quality during calls is ok, occasionally a bit tinny, but the Sprint connections I have had in the past at home are now  vastly improved. If you are in the market for a CDMA phone the Replenish will do just fine. I had no difficulty using the virtual Android keyboard or the QWERTY keyboard. Logging into my gmail and accessing my Google Voice and Facebook worked just fine. And a device JUST working is the bottom line.

The 2-megapixel camera is ok but nothing exciting.

If you experiment you can get decent shots. Here’s some peppers with Fluorescent White Balance. I was able to get a better red than the other White Balance settings but you can see the highlights are a bit blown out. :

And then there are videos. Here’s one with the Blue Filter. Other phones have more exciting filters:

While not having as large a screen as some phones it’s not bad. It’s a 4-inch, 480-by-800-pixel NOVA capacitive touch display. It’s a dual-band EV-DO Rev. A (800/1900 MHz) device with 802.11b/g/n Wi-Fi. And like the Replenish making calls in the cemetery does not result in dropped calls. Yes, the cemetery is one of my “test” locations. Some older phones drop calls  like a drunken sailor drops bills on the bar. The Samsung and LG perform quite well. Like the Samsung the Lg comes with a 2gig microSD card. But it has a nice big 2.79GB of internal storage. I transfered some of my custom ring-tones via Bluetooth and also by plugging into my laptop. As with any Android device one just let’s the phone show up as a storage device and one can look around the files like in any other removable HD. And no matter where the files are as long as they are in a folder called Ringtones they will be found when you are linking one to a contact. The microSD card is accessed by removing the phones’ cover. But  unless you wish to replace it with a 32GB or larger card there’s no reason to ever open the phone.
The LG having GPS enabled makes using maps fast and easy.
The Marquee’s has a 5-megapixel camera with auto-focus and LED flash. The Camera button is on the left side of the Marquee body just under the volume buttons. On the LG it’s on the right where I have generally seen it. There’s also a 2-megapixel front camera.

How successful at getting close up images? not always. I have to work at it. But if you look through the album linked at the bottom of this article you will see that sometimes I got and sometimes I didn’t. Maybe I just need more practice.
Don’t forget to look at the LG Marquee with Solarize filter. The video is a nice 1280×720 pixels.

Album of pictures and videos made by the Boost phones: