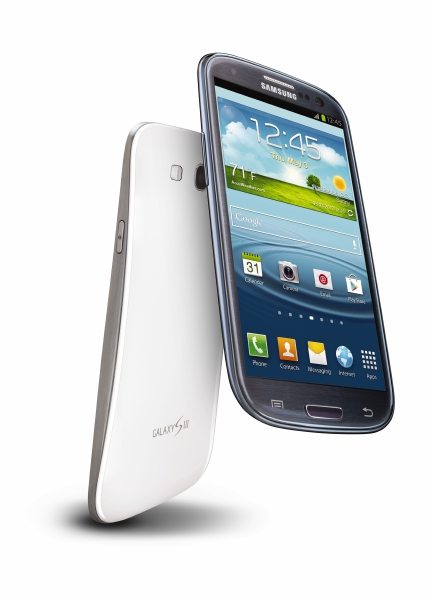 What I love about the Samsung Galaxy S lll

A few days ago New York was host to an Event announcing the Samsung Galaxy S lll. They insist this is a Very Impressive Phone and frankly I can’t disagree. It’s chock full of useful and interesting features and I have JUST begun to plumb the depths. This article will introduce the first features I found and what I like (or like less) about these……So let’s begin. The S lll comes in “marble white” or “pebble blue”. I’ve heard of a red version but that isn’t out yet. What was given to me for review was the blue model and I have to say it’s quite delicious. It looks more like a gray steel tone but the phone has those ‘cool car’ curves. It’s only slightly bigger than the S ll but not really noticeable during real world use.

Phone in original packaging with wise words included with the plastic screen cover.

These are the things I LOVE right away:

Video from the New York Event

By the way NBA stars, Kevin Love and Steve Nash were at the Event to show off the “Burst Shot features”. Hall-of-Famers Walt Frazier and Bill Walton were also on hand to give people photo-ops.
NFC

The Samsung S lll is the first device I’ve used that has NFC and it’s quite interesting. My review model came with a standard “TecTile” package. There’s five Tiles enclosed. You download the free Samsung TecTile App which lets you program any Tile.

After Downloading the TecTile App, start it up and decide what Action you wish to program the tile for. I wanted to Silence the phone so I picked “Settings & App’s”

That brings me to another screen for a more specific task. In my case that was “Change Phpne Settings”

Because I chose to change the Sound Settings this screen let’s me pick more specifically what I want to happen when I use the tile. I ended up choosing “toggle”

Take one of the tiles and place it behind your phone.
As you can see I’m making the tile rewritable because we all make mistakes :)

Once the Tile has been programed the Message alerts you to that and you are ready to use the tile whenever you need it. There are times and places when I need the phone to be in Silent Mode. I can get this done very quickly by just holding the back of the phone over the Tile. Voila! Phone is silent. And because I ultimately choose “Toggle” for the particular Value it changes the state of phone whenever I use the Tile.

Ok, so what’s my “complaint”? Well, you can’t change everything and somethings can’t be programed together in the same Tile. I can’t program “Airline” mode for example. At least I haven’t been able to figure out how to do it. Looking at the first screen of the App there’s Four categories to choose from. Once you pick one you can’t access any of the other three categories. Although in many cases why would you want to…… In any case I figure the next generation software may have more features. I do like the potential with these. Especially for things such as programming a ‘business card’ in a tile which includes your web site, phone number, etc. Have a client tap your Tile and whamo! Info exchanged without having to ask for an email address or number..and so on. Very cool, indeed. When you have certain tasks that you repeat being able to program them in a Tile will save time. Each Tile comes with a sticky back so they can be placed Exactly where you need that task preformed. For example, stick one in your car to turn on BlueTooth.

Obviously this is early days with this technology but it all looks quite exciting. I’ve noticed that in the UK you can use “Smart Card Buddy Beta” to read your smartcard.

If Barnes & Noble is adding “NFC to Nook e-reader” than will I be able to walk into a B&N store and wave my Samsung S lll at the bookcases to get info on their library?? Or will they use this technology in real paper book libraries? Will they being using this technology in stores, subway travel, airline travel??

Samsung Share-to-Go are starting ahead of the pack by using this NFC technology. Samsung S lll owners will be able to download content directly to their device with a simple tap of their phone to the smart board or kiosk. The video shows a kiosk. I would think the best places for these are shopping areas like malls and subway/train/airports and so on. Just consider the possibilities: http://www.buynfctags.com/

I don’t think I’ve discovered them all but the Gestures I do know really make the Samsung S lll feel brilliantly well designed. While texting someone if you lift the phone to your ear it will CALL that person to continue the conversation. If you watch the video from the NY Event you will see the nice lady show you how to turn the camera on from the Locked Screen. This takes a few practice tries but once I saw her doing it I “got it”. Basically you touch the center of the locked screen in the vertical position and then rotate to horizontal while STILL holding the screen. Boom, the camera turns on instantly and you are ready to shoot. I LOVE taking pictures with any phone I happen to have on hand. And I’ve missed a few shots because I have to turn on the screen, find the icon or button that starts the camera, find the right setting……..oops, Kodak moment gone. Well, not with the S lll. If I miss a shot now it will be because it was supersonic or Doctor Who traveling in Time.

Another example of a Hand Gesture is how I can make a screen capture. Hold the edge of your palm at a 90° on the screen and move it across in either the left or right direction. Do it in a medium but steady motion and the screen will blink, saving the an image in your “Pictures/Screenshots” folder. Check your preferences for these Gesture settings:

As you can see there are various other Gestures available including Muting the phone by covering or turning over the screen. No more stumbling with buttons while people Stare at “the moron” wondering why YOU can’t stop disturbing them in a theater, restaurant, in church, etc. Whew! Embarrassment Averted!
I’ll be exploring more of these but back to the Screen capture. I discovered that I can even capture the Locked Screen. That’s a first! And you can also Capture a Screen by pressing the Power button and the Home button at the same time.

The Locked Screen has this delightful feature. Well, it has several. See those four icons at the bottom: (Call) Contacts, Messages, Memo, Camera. Those are “special” in that they have been programmed to this screen to be instantly started if you touch one of them and wipe the screen. You can change these to be whatever you need most or more immediately. As I mentioned I love that from THIS Locked Screen I can simply pull down the Notification bar and see all my notifications, access my settings and I don’t have to make the extra step of opening the phone. AND, if I wiggle the Locked Screen slightly not enough to open the phone) the Locked Screen has this “water” noise as if i was dipping my finger in a pool. Plus it animates the section of the Locked Screen I am touching so the image moves as if it’s water. Call me simple but I do love little touches like this.

Ok, so everyone must know by now that I need Screen Captures for these reviews. Well, here’s a strange thing I discovered with this phone. First, I always use my Google account with every phone I review so I can take advantage of a number of convenient features including Instant Upload to Picasa. I took a few pictures with the camera and those uploaded to Picasa with no problem. When I need to upload Screen Grabs I have to do those manually. I was only succeeding intermittently. I tried using the file manager, the Gallery app, downloading another file manger app and I realized there was an issue with the phone itself, not the programs. Not the hardware but a conflicting software.

One of the things I had done in the first few days I had this phone was make a Samsung Account. This was to test out the Sharing features.

I used my gmail address for this

So after a couple of frustrating days not being able to upload to Picasa it occurred to me (derp!) that maybe there was a conflict because I naturally was using a different password for each. Which is what you are supposed to do in my opinion. So I removed the Samsung account from the phone. As soon as I did that I was once again able to upload to picasa. Problem solved! I will be trying to make a Samsung account with another email address and trying it again but that is for another article.

Pop up Play
Another cool feature that I have just started to explore is what can be considered “multitasking” on a cell phone. The last time I had real multitasking was on my Amiga. In this case it is a Picture in Picture technique. Let’s say I am watching a video or film (not you tube but something in the phone) and i get a call or a text and I want to read the text or take the call. I would tap on the 2 joined rectangles on the lower right of the video screen. This will shrink the video to cover about one fourth of the screen.

I can move the film around by touching it and moving it to a section of the screen that lets me conveniently read my text message. During a call the film will pause. Once the call is ended Tap the video to resume play. Tap twice to enlarge to it’s normal size.

The video is of “Game of Thrones” while I’m surfing in Opera.

Using this for just a few days I haven’t experience any major issues. But I have more time to play and this is just the first of these in-depth articles on the Samsung Galaxy S lll.

I haven’t even begun to play around with the camera features and THEY look very interesting!!

So, until next time…..Learn More about Galaxy SIII on the following social channels:
@SamsungMobileUS | Facebook | Visit Galaxy S III Website